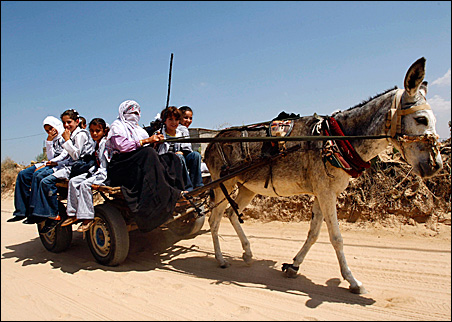 REUTERS/Ibraheem Abu Mustafa
Palestinian students ride on a donkey cart as they return home from a United Nations school east of Khan Younis in the southern Gaza Strip, Aug. 31, 2009.

JERUSALEM — In the Book of Lamentations, the people of Jerusalem cry out against the destruction of the city: “Is any suffering like my suffering?”

The answer, of course, is: No. Ever since, Jeremiah’s phrase has pretty much been the catchphrase of the entire Middle East.

On a recent Sunday, the Israeli Education Minister Gideon Saar told the cabinet that the word Arabs use to describe the foundation of Israel — “Nakba,” or catastrophe — would be removed from Arabic-language textbooks in the schools of Israel’s Arab minority. His contention: it wasn’t a catastrophe for him or the government that pays the schools’ bills, so out with “Nakba.”

The same day, Hamas lashed out at the U.N. agency that educates Palestinian refugees. The agency, Hamas alleged, was planning to change its textbooks to teach Palestinian children about the Holocaust. Hamas’s contention: the Holocaust didn’t happen, and teaching about it would legitimize the State of Israel which, in the opinion of most Palestinians, was foisted on them as payback for the Holocaust by guilt-ridden Europeans. Recognizing the sufferings of the other side is generally the first step in conflict resolution. It makes the enemy seem human. It’s something Israelis and Palestinians find particularly hard to do.

In a letter to the U.N. Relief and Works Agency, the Hamas-affiliated Popular Committees for Palestinian Refugees called the Holocaust “a big lie that was fabricated by the Jews and a big campaign of propaganda.” The U.N., the letter says, should “erase the subject of the Jewish Holocaust from the curriculum, and stop future attempts to insert strange concepts which contradict Palestinian values and principles.”

Hamas claimed to have uncovered plans to teach about the Holocaust in a human-rights course. There are 200,000 Gazan children in U.N. schools.

U.N. officials tried to set the record straight. Karen Abu Zayd, the UNRWA commissioner-general, said Tuesday that she could “refute allegations that the U.N. school curriculum includes anything about the Holocaust.”


A relief, perhaps, to anyone worried about offending Palestinians. Maybe not such a relief to those hoping the U.N. provides refugee children with a fully rounded awareness of history — the history of the people who live right next door.

Holocaust denial is common among Palestinians. That’s because they believe the enormity of the Holocaust diminishes — in the eyes of the world — the significance of their own suffering. The figure of 6 million murdered was made up, they contend, so that it would dwarf the 750,000 Palestinians who lost their homes and became refugees in 1948 when Israel was founded.

Hamas has backers in this regard. Since its international isolation in 2006, the Islamic group has increased its political and financial ties to the Holocaust-denying regime in Tehran. In contrast, Saar, the education minister, didn’t entirely deny the grievance of Israel’s Arab population at the cabinet meeting in Jerusalem. “It can be said with certainty that Arab Israelis experienced a tragedy in the war [of 1948],” he said. “But there will be no use of the word ‘Nakba,’ whose meaning is similar to Holocaust in this context.”

For Saar it seems to be more a matter of capitalization. That is, 1948 was a catastrophe for the Palestinians, but not a Catastrophe.

“The creation of the State of Israel cannot be referred to as a tragedy,” he said, “and the education system in the Arab sector will revise its studies in elementary schools.”

All this is just in time for the return of students to school for the start of a new academic year.

Now that’s a kind of suffering everyone can relate to.

Palestinians and Israelis take an eternal debate into the classroom, leaving the UN stuck in the middle