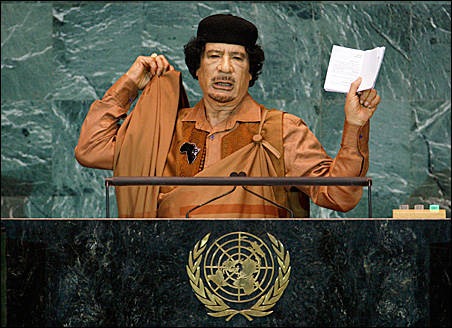 UNITED NATIONS — The political theater at the U.N. on Wednesday ranged from realism to the absurd in three acts as President Barack Obama’s bid to present a new American face to the world ran into Libyan leader Moammar Gadhafi and Iranian President Mahmoud Ahmadinejad.

Obama tried to sell a new, caring America that takes other nations’ interests into account, while Gadhafi and Ahmadinejad stood as tall reminders of just how much suspicion of America there is to overcome.

Obama and Gadhafi made their debuts on the General Assembly stage. Ahmandinejad made   a repeat performance, thanks to his tainted re-election back home.

The American president stirred delegates from 192 nations with a lofty speech, executed with his now trademark flourishes. It was aimed at pleasing a largely anti-Bush administration crowd by putting as much rhetorical daylight between himself and the previous president as possible.

“I took office at a time when many around the world had come to view America with skepticism and distrust,” Obama said. “Part of this was due to opposition to specific policies, and a belief that on certain critical issues, America has acted unilaterally, without regard for the interests of others.” But he cautioned the world against “misperceptions and misinformation” that have “fed an almost reflexive anti-Americanism.”  He was already changing things, he said.

Obama was applauded for prohibiting torture on his first day in office, for ordering the closure of Guantanamo and for vowing to extract all U.S. combat troops from Iraq by 2011. But said he wouldn’t apologize for pursing American interests, including prosecuting a war in Afghanistan against the Taliban.

The audience was pleased when he said the U.S. had paid its U.N. bills and when he called for a Middle East settlement that “ends the occupation that began in 1967.” Apparently it was the first time an American president had called it an occupation.

The climate, the economy and nuclear proliferation can only be solved collectively, Obama said in a major departure from Bush. “Those who used to chastise America for acting alone in the world cannot now stand by and wait for America to solve the world’s problems alone,” he said.

The president was escorted from the podium into a small room behind the General Assembly speakers’ platform where the next speaker normally waits. On deck was Gadhafi.

But the Libyan leader had been sitting in the audience all along listening to Obama. And there he sat for 10 minutes, as many delegates rushed to greet Obama, causing an awkward pause, before Gadhafi sauntered onto the stage to launch a 96-minute, one-man show.

Speakers are restricted to 15 minutes. Having never been to the U.N. before, it seemed he used up 40 years of allotted time in a single go.

Speaking from crumpled yellow, legal pad sheets and mostly off the top of his head, which was covered in a black hat, Gadhafi, the showman, did not disappoint.

Raising his flowing brown sleves to wave and then toss aside a copy of the U.N. charter, he blasted the veto of the five Security Council permanent members, singling out the U.S. for profiting from many of the 65 wars he said the U.N. had failed to prevent since its inception.  “If Libya attacked France, the U.N. would have to stop it,” he said. “But these wars weren’t stopped.”

“It should not be called the Security Council, it should be called the Terror Council,” he said. “We cannot live under the terrorism of the superpower — Africa needs a permanent seat.”

Gadhafi said Africans left for Europe in search of the “wealth looted” from the continent, which should be repaid with $7.77 trillion.  Because Italy had apologized for colonizing Libya and agreed to pay $250 million over 20 years there was no longer Libyan emigration to Italy, he said. Despite this criticism, Gadhafi praised Obama as a “son of Africa” and “my son.”  He accused Ronald Reagan of sending “poisonous roses” in the form of cruise missiles to Libya in 1986. “But what our son Obama said today is completely different today,” Ghadaffi said. “America cannot solve problems alone.”

Obama was but a “glimpse in the dark” however, and after he leaves office “we may go back to square one.”

“Can you guarantee how America will be governed after Obama?” Gadhafi asked, wheeling  around to look at a startled Secretary General Ban Ki-moon sitting above him. “As far as I’m concerned he can stay president of America forever.”

Ahmadinejad, who spoke later in the day, was less trusting of Obama.  “We must all remain vigilant to prevent the pursuit of colonialist, discriminatory and inhuman goals under the cover of the slogans for change,” he said.

Iran is facing a deadline by the end of the year to suspend enrichment of uranium believed to be intended for a nuclear weapon or face possible new U.N. sanctions. Russian President Dmitry Medvedev on Wednesday signaled that Moscow might agree to new measures.

If those steps fail, analysts say the likelihood of Israeli military action to take out Iran’s nuclear facilities would increase dramatically, with or without U.S. approval.

Obama is immensely popular abroad, where there is a yearning for America to lead again, multilaterally. One wonders how this audience would react to that closing scene.

Political theater at the U.N.