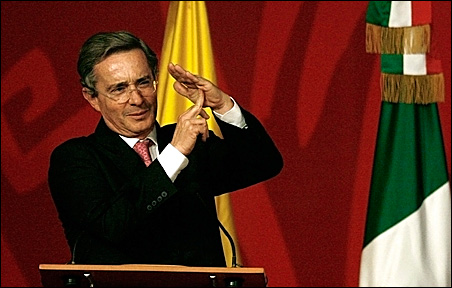 BOGOTA, Colombia — Across Latin America, presidents are pulling strings and pressuring lawmakers to change their constitutions to allow for multiple presidential terms — a trend that began in the 1990s.

Presidential re-election is a controversial issue in Latin America because many nations were ruled by abusive military dictators who refused to leave office peacefully. In addition, the courts, the media and other institutions that serve as checks on presidential power were often weak.

As a result, when democracy took hold, most of the new constitutions in these countries banned presidential re-election. But the emergence of a string of charismatic, successful leaders in the 1990s convinced politicians and voters to amend their constitutions to allow for second, and in some cases, third terms. Colombia’s Alvaro Uribe is the latest Latin American leader hoping to hang onto his job. The House of Representatives is scheduled to meet Tuesday to vote on a bill to hold a referendum that could pave the way for Uribe to stand for a third four-year term in the 2010 election.

But Uribe should be careful what he wishes for. In many cases, second and third terms haven’t worked out so well.

The Bad: Menem’s second term was marred by corruption scandals and an economic slowdown. He tried and failed to amend the constitution to run for a third consecutive term in 1999. After sitting on the sidelines and facing numerous lawsuits, he was allowed to run for a third term in 2004. Menem won the first round of voting but pulled out of the run-off when he appeared headed for certain defeat.

ALBERTO FUJIMORI: President of Peru, 1990-2000
The Good: His economic policies helped end hyperinflation and usher in a period of rapid economic growth. He was widely credited with defeating the Shining Path guerrillas following the 1992 capture of the group’s leader Abimael Guzman — though remnants of the rebel organization continue to carry out attacks. A new constitution in 1993 allowed him to run for re-election in 1995.

The Bad: Fujimori closed the Congress in a so-called “self-coup” in 1992 and was accused of human rights abuses in the war against the guerrillas. His allies in Congress “reinterpreted” the constitution, which opened the door for Fujimori to run for a third five-year term in 2000. Though he won, the election was tainted by fraud and shortly afterward Fujimori fled to Japan and faxed his resignation from Tokyo. On April 7, 2009, he was found guilty of human rights abuses and sentenced to 25 years in a Peruvian prison.

HUGO CHAVEZ: President of Venezuela, 1999-present
The Good: Chavez, a former paratrooper and failed coup leader, became the first Venezuelan president from working-class roots. Amid an oil-fueled economic boom, he spent billions on health care and education. Under a new constitution, Chavez, who later endorsed socialism, won a second term in 2000 and a third term in 2006.

The Bad: Chavez has been widely accused of squandering the country’s oil wealth, cracking down on the media and concentrating power in his own hands now that his allies control all three branches of government. Growing opposition led to a failed 2002 coup attempt against his government. Chavez has vowed to rule until 2021 and he may get the chance. In February, voters passed a referendum to eliminate presidential term limits.

RAFAEL CORREA: President of Ecuador, 2007-present
The Good: A former government finance minister, Correa came out of nowhere to win the 2006 elections. He has close ties to the country’s indigenous population and pledged to fight poverty and stamp out corruption. He has criticized foreign banks and forced the U.S. military — which ran anti-drug flights from an air base on the Pacific coast — to leave the country. He rewrote the constitution, giving more rights to the poor, women, indigenous communities and emphasizing environmental rights — and allowing presidents to run for two consecutive terms. He won a second term in April under the new constitution.

The Bad: Correa has sparred with the media, claiming that journalists act like “wild beasts.” He filed a lawsuit against the Quito-based La Hora newspaper over a critical editorial. The Correa government has repeatedly clashed with Colombia, Ecuador’s most important regional trading partner, over political and military issues.

ALVARO URIBE: President of Colombia, 2002-present
The Good: Uribe’s U.S.-backed military has dealt a series of blows to left-wing guerrillas while thousands of paramilitary fighters have disarmed. Homicides and kidnappings have been reduced and improved security paved the way for an economic renaissance. The pro-Uribe Congress amended the constitution so he could run for a second term in 2006, which he won. Legislators are now pushing to change the constitution yet again.

The Bad: Uribe’s intelligence service has been accused of spying on political opponents. Dozens of pro-Uribe legislators have been jailed for collaborating with right wing death squads. Thousands of paramilitaries have rearmed to smuggle drugs. As Uribe pushes to change the constitution to run for a third term next year, he has been accused of amassing too much power.

MANUEL ZELAYA: Ousted president of Honduras, 2006-2009
The Good: Zelaya tried to resolve rampant gang violence in Honduran cities and pushed for broader citizen participation in government. Though he comes from a family of loggers, he promoted conservation programs for Honduran forests. During his first year in office, Honduras registered strong economic growth.

The Bad: After forging closer ties to the Chavez government in Venezuela, Zelaya planned to hold a non-binding referendum to gauge public opinion on the issue of presidential re-election, which is banned by the 1982 constitution. The move was denounced by the courts, the military and even the majority of Zelaya’s Liberal Party as an illegal power grab. On June 28, 2009, the day the referendum was to take place, Zelaya was ousted in a military coup.

Return of the dictators: Alvaro Uribe is the latest Latin American leader to push for more time in office