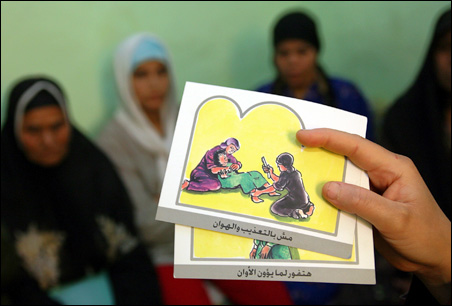 STOCKHOLM, Sweden — When she was 11, a Swedish-born girl was taken on vacation to her mother’s native Somalia. The mother wanted to “make her daughter clean” and paid a man to cut off her daughter’s clitoris and labia while two women held her down.

Afterward, the girl was stitched to her urethra.

No anesthesia was used.

Last year, at age 19, a Swedish court convicted the mother for those illegal acts, awarding the victim record demages.

Scandinavians — rather than quietly recoiling as immigrant mothers take their Europe-born daughters on vacation to Africa be circumcised — are fighting the traffic in female genital mutilation (FGM).

Sweden, Norway and Denmark are doggedly pursuing perpetrators of FGM, practiced by African and Middle Eastern cultures. Those perpetrators are mostly the immigrant mothers of the young girls. Jail sentences, record damages and controversial immigration laws are Scandinavia’s weapons in this war. Meanwhile Africans — who have immigrated with their families for a better life in northern Europe — wring their hands, imploring Westerners to understand that they are doing what they think is best for their daughters.

“The reasons given for female circumcision are traditional, cultural and religious. It is believed to encourage cleanliness, to control promiscuity, enhance the males’ sexual pleasure, preserve virginity and protect against unwanted pregnancies,” said Timnit Embaye of the International Organization for Migration (IOM) in Kenya.

But Scandinavian leaders refuse to interpret tolerance of female circumcision as politically correct.

FGM “is a very serious assault on children,” said Norway’s Secretary of Justice Knut Storberget. “It is important that they will be given a chance to value this independently when they are old enough to understand.”

In Scandinavian countries, female circumcision is illegal even if it happens in another country and even if the practice is legal in that country. It does not matter if the victim said yes, it is still illegal. Perpetrators — such as a girl’s parents — are being prosecuted upon return to Scandinavia and face up to 10 years in prison.

In Norway, the Immigration Appeals Board has allowed African families to remain in the country even if they do not fulfill immigration criteria. The board fears that sending families back to Africa will leave their daughters vulnerable to circumcision. In 50 cases of asylum applications rejected by the Norwegian Directorate of Immigration, appeals were filed not by the families as usual, but by the appeals board itself.

“Female genital cutting is a serious assault and contradicts basic human rights,” said Jan Olav Barstad of the appeals board. Earlier this year a Danish court handed down the country’s first jail sentence for carrying out female circumcision. A 40-year-old mother from Eritrea, where circumcision is practiced among more than 98 percent of the female population according to the World Health Organization (WHO), was sentenced to two years in jail after forcing her two daughters, 10 and 12, to be circumcised on a trip to Sudan in 2003. When the parents planned another trip to Sudan with their 6-year-old daughter, the two elder girls alerted other adults. The police seized the parents, and the shocking story took center stage in Danish media for months.

The father claimed he had no idea what was happening and was acquitted of any charges.

“Although women are often responsible for the practical arrangements, members of the extended family are usually involved in the decision-making,” said Margaret Chan, WHO’s director-general, in a statement. “Female genital mutilation is a manifestation of gender inequality. It represents society’s control over women.”

Without support from men in societies where FGM is practiced it will never be stopped, experts say.

“There is often an expectation that men will marry only circumcised women,” Chan said. “Anyone departing from the norm may face harassment and ostracism.” In Eritrea, if a girl is not a virgin, she will be returned to her parents’ home after marriage. Circumcision is seen as evidence that a girl is a virgin.

Embaye of IOM, who is originally from Kenya where circumcision rates affect about 32 percent of the female population, said that for these reasons mothers are reluctant to object to the circumcision of their daughters.

“Women in most African communities are taken as second-class citizens. Although the mothers may not want to circumcise their daughters, it is often very difficult for them to openly oppose the practice,” she said. “It would be a bold woman to stand up against a practice that has been endorsed by all her women ancestors for centuries.”

So Scandinavian governments are trying to stand up for the women. The Swedish government has launched a national campaign trying to stop female circumcision in Sweden, including among immigrants without citizenship. It has also moved to support girls and women in Sweden who already are victims of circumcision. The act directs Swedish schools, preschools, hospitals, local health centers, social services, police authorities and prosecutors to understand, prevent and deal with circumcision. Police and prosecutors have attended regional conferences on how to do that.

A new law in Norway that goes into effect nationwide Jan. 1 will offer free genital screenings to all girls emigrating from countries where 30 percent or more women are circumcised. If the offer is not accepted, immigration authorities can alert the Children’s Welfare Institution. Girls who reside in Norway will have health checks in the fifth and 10th grades.

“Genital cutting is illegal and results in incurable damage for the victims,” said Norway’s Secretary of Health Bjarne Hanssen. “Therefore, we launch this additional rule.”

Laws regarding female circumcision were adopted in Sweden in 1982, in Norway in 1986 and in Denmark in 2003. In the U.S., it has been a federal crime since 1997 to conduct female genital mutilation on anyone younger than 18.

However, IOM believes approaches must be delicate.

“Forceful means — including laws — will not bring any success,” Embaye said. “The approach should be respectful and not militant. The whole issue needs careful talking and patience where the communities concerned are slowly but readily educated.”

But patience and slow action is not the Scandinavian approach. Fourteen reports on female circumcision are under investigation at the Oslo Police Department and in June, Norway’s parliament made a move that is likely to increase that number even more. The statute of limitations was changed from 10 years after the offense occurred to 10 years after the victim turns 18.