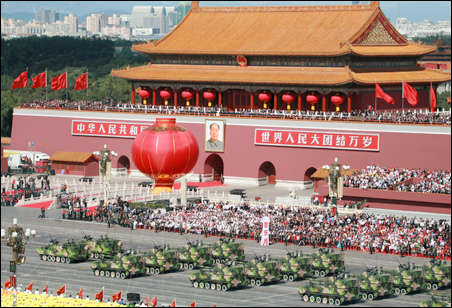 REUTERS/China Daily
Tracked carriage motor howitzers take part in a military parade to celebrate the 60th anniversary of the founding of the People’s Republic of China, in central Beijing, Thursday, Oct. 1, 2009.

HONG KONG, China — One month ago, Chinese journalists flocked to cover renewed violence in Xinjiang province, as ethnic Chinese blamed the Uighur minority for a rash of mysterious hypodermic-needle attacks.

China’s media is among the most restricted in the world, so it wasn’t entirely surprising when reports emerged that police had beaten and detained three of the bolder television journalists, accusing them of inciting inter-ethnic violence.

Except, this trio hailed from Hong Kong, the one beacon of democracy in all of China. So news of their treatment struck a nerve in a territory that London returned to China 12 years ago, after 150 years of British rule. Hundreds of Hong Kong journalists took to the streets to demand not only an apology from the Chinese authorities, but even an investigation of the event.

“Press freedom and rule of law are core values of Hong Kong society,” said Yin-ting Mak, chairwoman of the Hong Kong Journalists Association. “That’s why people were so angry, because this was the most vivid, most extreme example of violating these values.”

The incident exposed ongoing tensions within the “One Country, Two Systems” policy that underpinned the British handover and lies at the heart of China-Hong Kong relations today.

This helps explain why this week, as Beijing celebrates 60 years of the “People’s Republic of China” and Communist Party accomplishments, the reaction is far more mixed in politically polarized Hong Kong. After all, Hong Kong has shared only one-fifth of that history, and many locals descend from the Chinese refugees who fled since the 1949 Communist takeover. Pro-Beijing factions revel in the motherland’s remarkable economic growth and prominence on the world stage — both embodied by the gleaming new military hardware the celebration will showcase.

“We all know we live in the People’s Republic of China, and the central government is run by the Communist Party,” said Horace Cheung, vice-chairman of the Democratic Alliance for the Betterment and Progress of Hong Kong. “We just want to celebrate the New China and the great success it’s achieved.”

The “pro-democracy camp,” though, is wary of any effort to erode an arrangement that uniquely sees a tiny island of citizens enjoy civic freedoms denied the rest of their compatriots. (Hong Kong even fields its own Olympic team.)

Underscoring the point, little news of the journalist protests has trickled onto the mainland.

“Hong Kong people aren’t really politically active in terms of trying to bring about political change, but it’s a very different matter if Beijing tries to roll back their civic freedoms,” said Nicholas Bequelin, a China analyst with Human Rights Watch who’s lived in Hong Kong 10 years. “They don’t want Hong Kong to become just another Chinese city, but to keep their specificities.”

In this dynamic metropolis today, Hong Kong officials — sometimes criticized here as too servile and non-confrontational with Beijing — have already launched a slew of anniversary activities, from carnivals and parades to commemorative stamps, books and exhibits.

In a shop of traditional Chinese medicines, manager Ah Chui says business is booming. Some 70 percent of his customers now come from the mainland for good deals on dried items like ginseng, seahorses, deer tails, swallow saliva and cod-fish bladder, all stored in large glass jars along the wall.

“As long as the government continues the economic growth and stability, then I’m pro-government,” said Chui, 60.

Around the corner, in a small restaurant specializing in turtle soup and turtle jelly (best served with a dash of sugar), two female workers say they’d join in festivities if they didn’t have to dote on hungry customers.

“History’s in the past, and we’re back in China with a sense of belonging,” said one of the middle-aged women, who wouldn’t give her name in case the owner objected. “It’s very natural that we’d want to celebrate with the whole country, because China today is very strong.”

Coby Kwok, strolling down stylish, neon-emblazoned Sai Yeung Choi Street with her friend Goldie, describes how her now-deceased grandfather often recalled his flight from Communist China decades earlier. That antipathy was transmitted to her, but for an additional reason.

“China is under-developed,” said Kwok, a 28-year-old garment-factory worker. “I don’t want to be one of them.” Then there are those who identify with Hong Kong’s distinctive atmosphere, the way a New Yorker identifies with that inimitable city.

“If someone asks me ‘What are you?’ I say I’m a Hong Konger,” said Jo, 52, a coffeehouse barista. “It’s not that I have negative feelings toward China. I just don’t feel connected to it.”

In one more sign of the gulf between Hong Kong and Chinese society, the “Hong Kong Alliance in Support of Patriotic Democratic Movements in China” will seize upon the holiday to perform a stunt unimaginable on the mainland: a 60-hour hunger strike to spotlight China’s human-rights record.

The alliance is best-known for annual candle-lit ceremonies to mark the June 4, 1989, Tiananmen Square massacres, when Chinese troops mowed down pro-democracy protesters. This year’s event, commemorating the 20th anniversary, attracted some 150,000 participants, triple the norm, said Richard Tsoi, who co-founded the alliance 20 years ago and serves as a vice-chairman.

Since so many mainlanders now live or travel here, the Oct. 1 anniversary “also represents an opportunity for us,” said Tsoi, who is banned from visiting the mainland.

“With all the propaganda about China’s achievements, we want to be an alternative voice, to provide the truth,” he said. “Economic growth is fine, but what about human rights?”