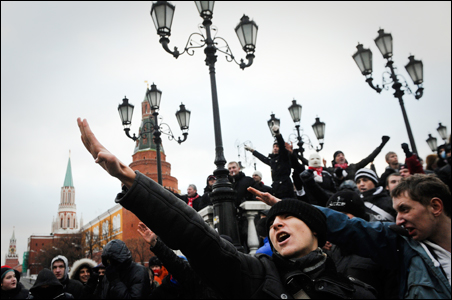 MOSCOW, Russia — A surge of far-right nationalist violence is sweeping through Russia, leaving at least two dead and dozens injured in recent days as soccer hooligans led by neo-Nazi groups capitalize on a wave of discontent.

On Dec. 11, at least 5,000 men and women flooded Moscow’s Manezh Square, just outside the Kremlin, flashing Nazi salutes and shouting racist slogans. They savagely beat passersby who looked as though they were from central Asia or the Caucasus, Russia’s mainly Muslim southern region. At least 20 people were hospitalized. One man is reported to have died from his injuries.

Clashes with riot police ensued. Video images showed hundreds of officers incapable of controlling the violent crowd. Several men from the Caucasus were beaten as police stood by helplessly.

Human rights activists have long been warning that Russia’s simmering tensions on the far-right could spill over.

As Moscow recovered from the public disorder, which reached a level unseen for years, far-right football fans gathered in St. Petersburg on Dec. 11 and in the southern city of Rostov-on-Don on Dec. 12, shouting racist slogans. A Kyrgyz man was stabbed to death in Moscow on Sunday night.

Police went on high alert Monday evening, shutting down Manezh Square, the shopping mall that lies underneath it as well as nearby metro stations, fearing a repeat of Saturday’s events. Far-right groups have called for a fresh gathering on Wednesday.

The spark that set off the violence was the killing on Dec. 6 of Yegor Sviridov, a member of the fan club that supports Spartak, one of Moscow’s most popular soccer clubs. He was shot in the head during a fight with several men from the Caucasus. The club called for revenge, and the next day more than 1,000 people shut down one of Moscow’s main arteries.

On Monday, the website for the club, Fratriya, posted a message saying it only supported legal means of protest. Yet it continued to host a video from the Dec. 7 street closure, showing hundreds of men marching with flares, shouting “Russia for Russians” and other racist slogans.

Despite signs of discontent — soccer fans in St. Petersburg clashed with riot police as early as mid-November — the outbreak of violence caught Moscow by surprise.

“There are few who understand what is happening,” said Galina Kozhevnikova, deputy head of the Sova Center, a Russian NGO that monitors violence against minorities.

“The government doesn’t understand what to do now that it’s let the genie out of the bottle,” she said.

The Russian government has long tolerated far-right nationalist groups. Every year, they are allowed to gather for an annual rally. This year was no exception, and the far-right Slavic Union gathered 5,000 people despite the fact that it was technically banned last year. While the neo-Nazis are given permission to march, similar requests from the liberal opposition are routinely rejected.

“It’s not a question of government sympathy or antipathy, it’s a question of loyalty,” said Kozhevnikova. “If a group is loyal to the government, it can do whatever it wants.”

Government officials have at times played to populist fears over immigrants and migrant laborers, particularly in the wake of the financial crisis, when unemployment skyrocketed. Moscow’s new mayor, Sergei Sobyanin, has made that a key platform since coming to power two months ago, saying he believed Muscovites should be given priority when it comes to jobs.

Vladimir Putin, Russia’s powerful prime minister, has yet to comment on the riot in Moscow. President Dmitry Medvedev used his Twitter feed to make a statement on Sunday night, minutes after tweeting about attending an Elton John concert.

“Everything is under control on Manezh Square and in the country,” Medvedev wrote. “All the inciters will be brought to justice. All of them, without question.”

Meeting with his security council on Monday, Medvedev warned: “Actions aimed at inciting racial, ethnic or religious hatred and enmity are particularly dangerous. They threaten the state’s stability.”

He continued, “The recent events in Moscow — the pogroms, the attacks on people — must be prosecuted as crimes and those responsible must be punished.”

About 65 people were detained during the Moscow riot, and all were released within 24 hours.

The relationship between soccer fans and far-right nationalists is, as in many European countries, a complicated one in Russia. They are often treated as “guns for hire,” carrying out brutal beatings for cash.

Oleg Kashin, a journalist who was savagely beaten one month ago, has said his attackers appeared to be soccer hooligans.

They are overwhelmingly male and young, organized around fan clubs and therefore easy recruits for extremist groups.

“The only thing that saves us is the fact they have no leader,” said Kozhevnikova, speaking of the far-right in general. “Once they do, we’ll have a Nazi putsch.”

Nationalist sentiment runs high in Russia and racism is easily tolerated, among the public, the government and the media. (One Russian tabloid has taken to calling Africans “overly tanned.”)

Yet the Sova Center has recorded a drop in violence this year, noting that while its statistics are incomplete because of the difficulty of gathering true numbers in Russia, 36 ethnic minorities have been killed so far this year, versus 83 last year. So far, 340 have been injured, compared to 434 cases documented last year.

The violence, and its nature, will likely cause global concern. The Dec. 11 riot came less than two weeks after Russia was awarded the right to host the 2018 World Cup.