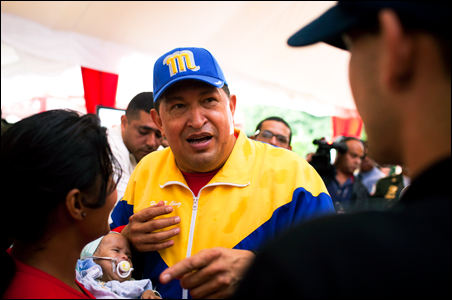 CARACAS, Venezuela — President Hugo Chavez’s supporters have been busy preparing for the new year — and for Venezuela’s new, opposition-filled legislature. Over the past two weeks, lawmakers loyal to the president have passed a raft of new measures, including a law that gives him the power to rule by decree for the next 18 months.

Chavez says he needs the law to aid the victims of floods and mudslides, which have left some 130,000 homeless. But opposition candidates, who won 67 of the National Assembly’s 165 seats in September, accuse Chavez of usurping their power before they take office this week.

Teodoro Petkoff, editor of the opposition daily newspaper Tal Cual, called the move unconstitutional, but unsurprising. Since the opposition boycotted legislative elections in 2005, Chavez has enjoyed a National Assembly monopolized by his supporters.

“Chavez’s answer (to the opposition’s gains) has been to protect his autocratic control … by introducing a law to make himself the legislative power,” Petkoff said.

It wouldn’t be the first time Chavez’s government has used its power to override unwanted results. After Caracas elected an opposition mayor last year, the National Assembly passed a law that allowed the president to appoint an official above him. Critics have also accused Chavez of using laws and targeted corruption probes to sideline his opponents — allegations Chavez denies.

Now, Chavez could use the decree powers to push through reforms rejected by voters in a 2007 referendum — such as one that would allow him to appoint regional authorities above elected mayors and governors, Petkoff said.

Chavez, who has held such powers three times in the past, said they’re necessary to help those affected by heavy rains. Thousands of homeless are taking refuge in hotel rooms and Chavez has used the powers to create a $2.3 billion fund for reconstruction efforts. But he has also used them to create 10 military districts — many of them in opposition-led states. While it’s not clear how these districts will be administered, critics fear that military rule could be used to override regional authorities.

Chavez has dismissed allegations that he’ll use the powers to turn the country toward dictatorship. Venezuela is heading for “democracy, democracy and more democracy,” he said recently. “Only it’s a new democracy.”

Sheladin Hostos, a 36-year-old medical student at a government-run university, said she approves of the measure regardless of Chavez’s intentions. Chavez needs more power to ensure that opposition lawmakers don’t dismantle his efforts to provide education, health and other benefits to the poor, she said.

“Many people, especially the lower classes, are in agreement with these laws,” Hostos said. “He needs more power to block” the opposition.

In addition to the decree powers, pro-Chavez lawmakers have passed an array of laws that will prohibit some non-governmental organizations from receiving foreign funding, regulate the internet, allow for the suspension of lawmakers who leave their political party, and pave the way for government intervention in banks.

Watchdog groups including New York-based Human Rights Watch have criticized changes made to a telecommunications law that make it easier for the government to revoke TV and radio licenses, or punish internet-based media that “incite or promote hatred.” Some fear that Chavez’s government could use the new rules to crack down on fiercely critical media outlets, such as TV channel Globovision.

But Hostos, for one, supports stricter controls on television and the internet. Since the telecommunications law was first passed six years ago, she no longer has to worry about her three children viewing racy Venezuelan soap operas in the late afternoon, she said.

Opposition lawmakers have called the laws a “coup d’etat.” In a statement last month, the main opposition coalition called on Venezuelans to take to the streets in peaceful protests. But many opposition supporters, including 31-year-old Geronimo Gonzalez, say such protests will only end in tear gas and water cannons, as they often have in the past.

Gonzalez, a computer technician, said the opposition must work to identify a candidate who can compete with Chavez in 2012. Chavez is using undemocratic means to pursue an ideological project — one that has done little to reduce problems such as rampant crime and a stagnating economy, Gonzalez said.

“It’s very sad,” Gonzalez said. “It’s been many years, and these new laws won’t resolve Venezuela’s problems, either. They are for a project, a political and ideological project, and nothing more.”