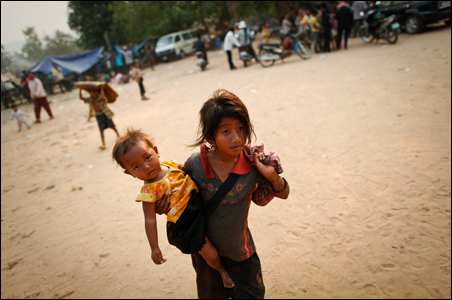 REUTERS/Damir Sagolj
Displaced Cambodians carry their belongings after fleeing from the area near the border between Thailand and Cambodia.

BANGKOK, Thailand — For days, primary school headmaster Prawat Panomsai warned his pupils that war was nigh.

When the shells finally rained down on Friday, the students knew just what to do. They ran like mad into their backlot bunker, a few drainage pipes fortified with sand bags, and listened as mortar rounds quaked hilltops along the Thai-Cambodian border.

Thai and Cambodian forces remain locked in tit-for-tat shooting and shelling near Phreah Vihear, an 11th-century Hindu temple and United Nations heritage site. Both sides claim the other invaded its sovereign territory.

The clashes have obliterated villagers’ homes and even demolished parts of the stone temple. So far, 34 Thais are injured, one Thai civilian and one Thai soldier are dead, and troops have evacuated more than 6,000 Thais living in the conflict zone.

Reports are more murky from Cambodia where, according to official reports, at least two soldiers were killed. Some Thai newspapers, however, report Cambodian casualties in the dozens.

“It’s obvious the troops have been preparing for the big fight,” said Prawat, whose school sits just inside the militarized zone. “They’ve been bringing tanks, armed vehicles and a ton of soldiers up the mountain. I’ve even found artillery cannons hidden in the jungle. If they go full force, there’s no way the Cambodians will survive.”

The two nations are ostensibly warring over less than two square miles of scrubby land. But this disputed territory — devoid of gems, oil or any valuable resource — has also become the focal point of a struggle to preserve national honor and save political face.

The turf has been disputed since the early 1900s when French colonialists, then in control of Cambodia, ignored the natural watershed and drew up the border to keep the temple on their side. Thais have since challenged these colonial maps and a 1962 World Court ruled that the ruins are rightly Cambodian.

The spat was largely forgotten until 2008, when the U.N. hailed the temple as World Heritage site within Cambodia. The Thai military subsequently ringed the site with troops and the Cambodians followed suit.

Though gunfire has broken out sporadically since then, leading to fewer than 10 acknowledged deaths on either side in recent years, the two armies have largely stared at one another in silence as their leaders struggled to settle the quarrel diplomatically.

Diplomacy, however, has not satisfied a faction of Thai nationalists that has helped draw Thailand into conflict. In recent weeks, they have practically bayed for aggressive action.

Several hundred members of the group, called the “Thai Patriots Network,” are now encamped around the Thai prime minister’s compound. They are demanding the government reclaim the disputed zone.

The conflict, however, has become intractable in part because its members walked into the militarized area with video cameras to prove Thai sovereignty.

The patriots network is largely a regrouping of the right-wing “Yellow Shirts” faction, which stormed Bangkok’s chief airport in 2008 to help oust Thailand’s ruling party. (Fed up with an “uneducated” public electing leaders they deemed corrupt, the group’s leaders proposed appointing all but 30 percent of the country’s politicians.)

The ex-general now attracts crowds with a mix of flag-waving rhetoric and a militant tone uncommon to Buddhist spiritual leaders. A banner at the encampment’s gate depicts the World Trade Center on fire with the Thai-language warning, “Wealth is the cause of violence.”

At the encampment, Chamlong has excited crowds with talk of Thai F-15 fighter jets zooming toward the disputed zone. He has readied them to siege government buildings in an attempt to expel Thai Prime Minister Abhisit Vejjajiva, who has not adequately defended Thai soil, Chamlong said.

Despite his aggressive stance, Chamlong’s credentials as a pious Buddhist are seldom questioned by his followers. At the rally site, visitors line up to prostrate at his feet, a sign of respect typically reserved for monks and royalty. He has famously vowed to preserve his spiritual purity by sleeping on a floor mat and remaining celibate, even though he is married.

At his ongoing rallies, the firebrand Buddhist has even riled up elderly devotees with an itch to fight.

“Just give me training. Show me how to shoot or throw hand grenades and I’ll fight for free,” said Krungsri Thitapura, a 77-year-old protester with silver whiskers and frail limbs. “I remember when the Khmer Rogue sent Cambodians running across the border. We helped them then. The old men in Cambodia should remember what we did for them.”

The Thai nationalists are equally fired up by the detention of their martyrs. Two network members remain in a Phnom Penh prison cell after Cambodian troops captured them for trespassing into the disputed zone in December.

Though Thai sympathizers have hailed their bravery, the Cambodian courts charged the pair with espionage.

Veera Somkwamkid has received an eight-year prison sentence and his accompanying aide, Ratree Pipatanapaiboon, received a six-year sentence. Five others on the trek, including a parliamentarian with the prime minister’s own party, were released after roughly a month in prison.

“We fight this case to confirm the truth. This land is Thai!,” said Veera’s attorney, Karun Sai-ngam, outside the Thai premier’s compound on Friday.

He had just returned from the Cambodian capital with a declaration: His client would not concede to their courts and deny the soil’s Thai ownership. “He has chosen the fighting path,” Karun said.

As the border fighting continues in fits and starts, the U.N. Security Council is looking over reports from both sides insisting the other shot first.

Indonesia’s foreign minister has flown between Thailand and Cambodia to broker peace on behalf of the Association of Southeast Asian Nations. Cambodian Premier Hun Sen has even raised the possibility of bringing in U.N. peacekeeping troops.

“We’re not angry, but we are prepared for the clashing,” said Prawat, the school headmaster. “We can’t allow Thailand to sacrifice its honor.”