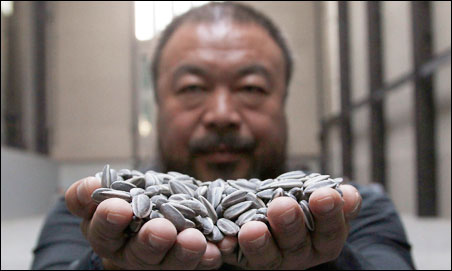 BOSTON — China’s Communist Party usually gets its way. It is, after all, one of the wealthiest governments in history. It underwrites more U.S. debt than any other country. It tolerates no opposition, and rules by dictate nearly a quarter of humanity.

But one individual poses an unusual quandary for the communists: Ai Weiwei. The government arrested him at Beijing airport on April 3 and has held him ever since.

The problem is, Weiwei is not a typical prisoner. He might be more trouble in detention than he is as a free man.

Weiwei is wildly famous around the world as China’s leading artist. He’s had major shows at London’s Tate Modern, at Munich’s Haus der Kunst and the Venice Biennale. Working with Swiss architecture firm Herzog and DeMeuron, he designed Beijing’s most iconic modern landmark, the “Bird’s Nest” National Stadium, the site of the party’s 2008 Olympic coming out party.

Like the Bird’s Nest, Weiwei’s art and his personality are deeply alluring. His work is objectively beautiful and interesting. It’s also easily accessible, even to people who have no interest in art.

He takes drab ancient urns — “cultural relics” as the Communists call them; items that make eyes glaze in museums — and breathes life into them by dousing them with vibrant colored paint. He filled the Tate’s massive turbine hall with 100 million hand-made, hand-painted sunflower seeds. For the art world, the Tate installation was commentary on so many things Chinese — the massive numbers, consumption, the cheap labor, the stereotype of Asian uniformity.

But it was also serious fun: Where other artists may have put the installation behind velvet ropes, Weiwei invited museum-goers to walk around on the porcelain seeds, to roll around on them, to pick them up and play with them — but not to steal them; like much of his work, they sold for a fortune. (Toward the end of the exhibit, the paint used on them was found to be laced with lead, so they were eventually cordoned off.)

In an excellent, 2010 New Yorker profile, Evan Osnos described the artist as China’s Andy Warhol, his studio a “hive of eccentric creativity that one friend calls ‘a cross between a monastery and a crime family.’”

Weiwei is also telegenic in his own manner, as is immediately evident in the work of Alison Klayman, an American journalist who followed him for two years for the forthcoming documentary “Ai Weiwei: Never Sorry.” He’s an affable imp, a portly teddy bear of a man with a Ho Chi Minh beard and a mildly infantile accent when he speaks English. (GlobalPost’s membership program interviewed Klayman and showed her work in a June 2 webinar).

He also has a highly-evolved mischievous streak. Friends call him an artistic hooligan. New York Times art critic Holland Carter dubbed him a “scholar clown.” While dissidents and activists may typically be thought of as serious and angry people, Weiwei revels in irreverence.

The Museum of Modern Art in New York owns a series of photos — ironically titled “Study of Perspective” — featuring Weiwei’s erect middle finger saluting the Eiffel Tower, the White House, the Mona Lisa and other icons of culture and power.

Flipping the bird and other forms of the word “fuck” are, in fact, signature themes in Weiwei’s art. Last month, collectors in Hong Kong bid for a beautiful sculpture called “marble arm,” of a svelte bicep and forearm leading to a meticulously manicured middle finger.

Weiwei’s Beijing studio is called “Fake design.” In part, that’s a reference to the fact that he’s had a wildly successful career in architecture despite having no formal training. But it’s also a mildly naughty joke: when Chinese pronounce the word “fake” it sounds just like the English expletive.

Fueling the mischief and giving him a target is the fact that Weiwei has had a contentious relationship with the Communist Party essentially since birth.

When he was young, his father Ai Qing, one of the country’s foremost poets and an early supporter of Mao Tsetung, was exiled to Xinjiang, in China’s remote west. The elder Ai was forced to clean toilets for many years. The party later relocated the family to a Gobi Desert outpost, where they lived in a cavern used for birthing farm animals. It was a humiliation that still apparently burdens his son, and inspires him to fight injustice.

As an adult, Weiwei can “seem congenitally incapable of cooperation,” as Osnos put it. Despite his contribution to the Bird’s Nest Stadium, he refused to attend the lavish Olympic opening ceremony. Instead, he used his notoriety to label the games a “fake smile,” put on by the party to fool the world.

n recent years, his work has become increasingly political. In an apparent reaction to the Communist Party’s predilection for censorship and oppression, Weiwei has embraced transparency.

Before his arrest, his studio was often crowded with journalists. For her documentary, Klayman recorded him for some 200 hours, including private moments with his family. And he embraced a dangerous (for China) obsession with exhibiting his life and thoughts online, through his now-banned blog, and via a Twitter habit that sometimes burned many hours of his day. Although he tweets in Mandarin in a country where the messaging service is officially banned, he has more than 85,000 followers.

Weiwei’s travails with Communist officials reached a new nadir after the 2008 Sichuan earthquake. As Klayman recounts in a PBS Frontline feature, a disproportionate number of the 70,000 fatalities had been in schools and other public buildings. These victims allegedly perished because of what the Chinese call “tofu construction” — shoddy workmanship in which the government officials in charge apparently sold off supplies and minimized costs so they could line their own pockets.

After the quake, the authorities clamped down on news of the controversy, refusing to release the names of the many schoolchildren killed. So Weiwei deployed volunteers to scour the disaster area, compiling a list of more than 5,000 names.

As the tension grew, so did Weiwei’s mischievous responses, in a cat-and-mouse game with the party that became perhaps his most courageous body of art. Officials mounted massive surveillance cameras outside his studio, so he took photos of them and posted them online, and he created marble likenesses of them.

On one trip to Sichuan, police broke into his hotel room at 3 a.m. and beat him, so he tweeted it, posting audio from the incident online; photos of the altercation made it into a European gallery and news magazine. In January, officials destroyed his new, million-dollar studio in Shanghai, a building that they had urged him to construct.

He filmed the demolition and declared it one of his most powerful works; Klayman’s footage of the event shows him in an orange hard hat, grinning with pleasure as a building that took him two years to construct turned to rubble. Each time the government tried to intimidate him, he used their own assaults against them, turning it into art and distributing to his followers.

With Weiwei in detention as part of a widespread crackdown to prevent a Chinese Jasmine Revolution, the question now is whether he’ll ultimately prevail once again.

It’s in no country’s interest to have such a renown and creative citizen behind bars. It is particularly awkward for China’s rulers to oppress the man who designed the venue for their coming out party. Moreover, in its quest to climb the economic value chain and provide its millions of new graduates with jobs, China is at a moment where it needs to embrace creativity, to innovate and to develop the arts, entertainment and other high-value sectors.

By detaining him, the party has effectively neutralized his activities. But they have also introduced him to millions of people who didn’t know him before. Google searches for his name have spiked since the arrest. And his arrest has inspired protests in the art world and beyond, becoming a thorn in the side of the party.

Unlike other dissidents, Weiwei has a charisma that can’t be imprisoned. His art will live on, regardless of what the party does to him.