News
Good Jobs
MinnPost's Good Jobs beat is made possible by a grant from MSPWin, a philanthropic collaborative committed to strengthening the workforce in the Twin Cities metro area. MSPWin plays no role in determining the content of the coverage.
March 2, 2016

Haas, 18, has long yearned to become a certified nursing assistant at the senior living community, where she’s served for the past two-and-a-half years as part-time wait staff.

Initially, Haas planned to continue with her old job at Friendship Village until she completed high school, and then earn an associate degree before applying for the nursing assistant job — a path she says might have cost her $14,000 in college tuition and another two years in the classroom.

But last year, the Kennedy High School senior learned about a program in her Bloomington School District, the Career and College Academy — an initiative geared toward students who are interested in receiving career skills and college credits while still in high school.

For some, the academy’s program is a pathway to living-wage jobs immediately after high school; for others, it’s a steppingstone to college. For Haas, it’s both. “I will start my full-time job in a couple of months,” said Haas, who eventually wants to become a registered nurse. The best part: “The courses I’m taking here also count toward a nursing degree,” she said.

The Career and College Academy, which was brought to Minnesota by the Greater Twin Cities United Way and made possible by a partnership of community colleges, government agencies and employers, is part of a nationwide effort to provide high school students like Haas with a path to well-paying jobs.

At the academies — which are now taking shape in several other school districts throughout the metro area — students learn from college instructors, earning credits and skills that allow them to further their education or begin a career. Students can choose from four different fields: health services, information technology, construction trades or criminal justice and law enforcement.

In Bloomington, for example, students are bused each weekday to a Career and College Academy building, where they’re taught by college instructors from Normandale Community College, Dunwoody College of Technology and others. Students in the construction program, meanwhile, shadow professionals in the work force as well as attending class. 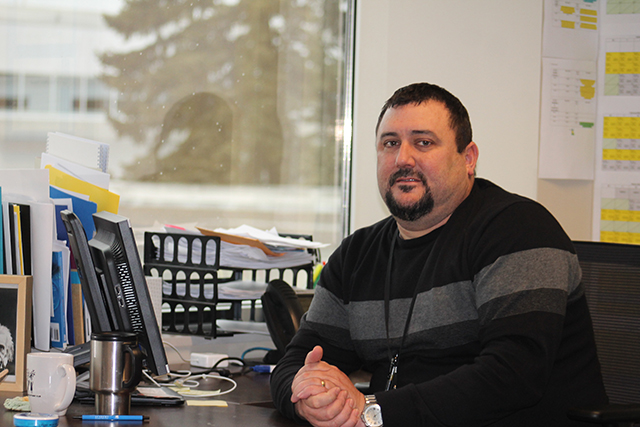 “This program is for all high school students, whether they want a career right out of high school or whether they know they want to continue their education for a four-year degree or a two-year degree,” explained Gary Kressin, the academy’s director. “So we try to intertwine as many certificates as possible that will help them.”

In the next several years, the program will enroll as many as 4,500 students from the Bloomington, Burnsville and White Bear Lake school districts. Leaders of the Career and College Academy say such programs offer the best way to link students to employment opportunities and college educations.

“When students are learning in an environment that’s connected to a subject they care about,” noted Greater Twin Cities United Way President and CEO Sarah Caruso, “they tend to work harder and get better because they’re both interested in the subject and see the value of what they’re learning.”

She added: “This program has very strong data. We’re bringing a proven program to Minnesota. We’re not experimenting.”

For decades, foundations and governmental agencies across Minnesota have put money into work-force services — without really changing many of the pressing unemployment issues the state faces. The Career and College Academy seeks to change that by tackling “the core problems” in high school education, Caruso said.

Some of the students may not be interested in subjects they study, said Caruso, because they don’t see the connection between the classroom and life after school, leading many of them to drop out of high school.

That’s not just bad for those students. It’s bad for the economy. By the end of the decade, after all, 74 percent of all jobs in Minnesota will require post-secondary education, according to a 2013 report from the Pew Research Center. Moreover, the state is projected to add more than 200,000 jobs as the baby boomer generation leaves the work force for retirement.

Yet Minnesota isn’t on track to fill the growing job vacancies. Enter the Career and College Academy, which not only hopes to prepare workers for profitable careers, but to help sustain the state’s economy.

Not all the 19 students in Haas’ medical terminology class recently were in the course to train for immediate employment after high school. Gloria Arpellet, for example, plans to attend a four-year college this fall — hoping to eventually go to medical school to become a pediatrician.

The 16-year-old immigrant from Ivory Coast first enrolled in the career academies program to decide whether she wanted to pursue a future in the medical field. First, she took a class that introduced her to the health field.

And she’s now in the same medical terminology class as Haas to learn the language of the health field. “I enjoy it,” Gloria said of the program. “It’s a good opportunity.” 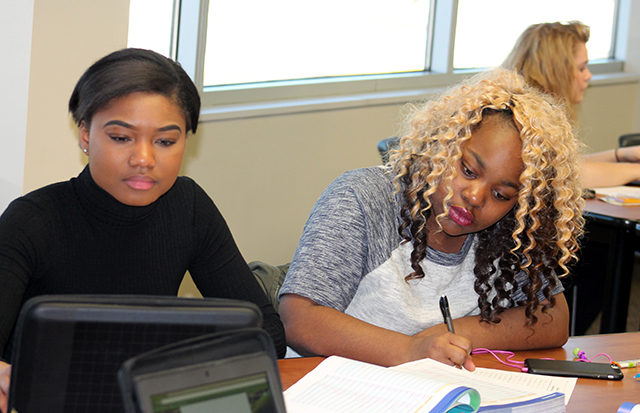 MinnPost photo by Ibrahim Hirsi
Ebony Shackelford and Gloria Arpellet work on an assignment during a medical terminology course at the Career and College Academy in Bloomington.

Gloria, who came to the U.S. in 2011 and whose parents remain in the West African country, wasn’t sure what she wanted to get out of the medical field before registering for the program.

After more than five months in the program, not only is Gloria mastering the medical terminology — which she admits feels like a foreign language — she’ll have a good grasp of the various professions in her chosen field and secure four college credits while still in high school.

“It was a way for me to actually decide whether or not I wanted to work in the medical field before I go to college and start spending money toward a field I wouldn’t maybe want to go to,” she said of the career program. “It’s also giving me an advantage over my fellow students who will be in classes with me next year because I already took this class.”

Like Haas, 17-year-old Emma Johnson is using this course to get a head start in college courses — and to begin a nursing assistant job at Friendship Village of Bloomington, where she recently became employed as a dietary aide. She plans to use her earnings from the nursing home to pay for her tuition to pursue a nursing program at Normandale Community College.

“These career classes are a lot different than the typical high school classes,” Emma said. “These classes will help me in life and push me forward in my career.”