News
Good Jobs
MinnPost’s Good Jobs beat is made possible by a grant from MSPWin, a philanthropic collaborative committed to strengthening the workforce in the Twin Cities metro area. MSPWin plays no role in determining the content of the coverage.
Dec. 22, 2016

William Hiniker is pursuing an associate degree at Dunwoody College of Technology, and he’s pretty confident about his future.

“I know that once I finish this program, I can get a job pretty much anywhere I want,” said Hiniker, who’s worked as a mechanic at a Shakopee landscape company and served in the U.S. Army as a combat engineer. “There’s no doubt about it.”

In today’s slow-growth economy, that isn’t something many first-year college students can say for certain — unless they’re like Hiniker, who will graduate with a degree in automated systems and robotics.

As technology continues to transform the workforce, such rosy employment prospects of folks like Hiniker has led community colleges across the state to expand programs that have just about anything to do with robotics and automation. Hennepin Technical College, for example, now has added 14 courses in its automation robotics engineering technologies (ARET) program since 2010.

The rise of the machines

For decades, American economists have debated the economic impact that automation and robotics will have on the workforce. Some say robotics will kill jobs; others say is could actually improve the economy. But both groups seem to agree on one phenomenon: that technology is advancing so quickly that it’s changing the labor market in profound ways, in industries as disparate as agricultural production and retail, replacing jobs that provided an economic lifeline to millions of Americans.

In manufacturing, of course, many jobs have already been eliminated due to automation, including the metal stamping, injection molding and welding work Hiniker’s father did for more than 20 years in Michigan. “I don’t want to call it dump equipment, but it’s more like people standing in a line, taking parts, assembling and packaging them by hand,” Hiniker said. “My dad used to make jack posts, those tubes you could find in most basements. They’re tedious jobs that don’t exist anymore.”

In response to those forces, the curriculum at Hennepin Technical College — like many automation and robotics programs across the state — has evolved since it was established in 1975. Back then, the program was called “packaging machinery systems” because it focused on fixing parts, packaging and machinery.

In the early ’80s, it was renamed “automated packaging systems.” As more artificial intelligence and automation took root in the workforce, schools such as HTC expanded their automation and robotics programs to meet workforce demands.

Even so, the need for skilled automation and robotics workers continues to grow. In automation alone, there were almost 1,500 job openings last fall, according to Hennepin Technical College Precision Manufacturing Director Matt Leaf.

And though more and more students are enrolling in these programs, Leaf said, it’s not enough to make “a dent in the amount of openings” that the state has in the robotics and manufacturing sector. “This does not factor in what’s going to happen in 5-10 years when more baby boomers are retiring,” he added.

Sometimes, Hiniker finds himself comparing his father’s experience of 30 years in manufacturing to his own interest in automation and robotics. The end result of his thought process is often the same: “This is the business of putting people out of a job, basically.”

But he also knows he can’t fight the changing workforce. So he’s been looking into what he might be doing when he graduates next year. In his hometown in Michigan, for instance, he came across numerous companies that design automated assembly lines, which creates various jobs for workers with automation skills. “So you have people setting up conveyor belts and sensors and assembly equipment,” he said. “They have people that go to these different factories and set up the machines and program the controllers.” 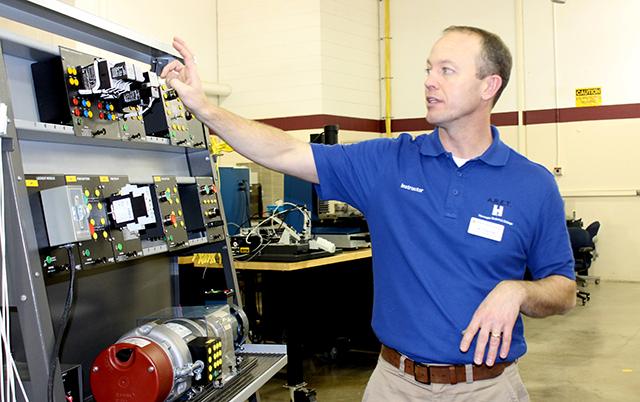 At Hennepin Technical College, Leaf said, enrollment of students interested in automation and robotics has more than doubled in recent years. “It’s a simple math problem,” he said. “We’re talking about spending $11,000 to get a two-year degree, and you can earn $50,000 a year without working any overtime. That’s incredible.”

E.J. Daigle, the head of Dunwoody’s robotics and manufacturing technology, assures his students that automation jobs aren’t limited to the manufacturing sector only, said Hiniker and Coleman. They’re everywhere, even at local carwashes. “All automated carwashes across the city are on programmable logic controllers and they can tell whether there are soaps and liquids in them and what level they’re at. It will send an email to the maintenance tech, who then refills the machine.”

Hiniker added: “I feel confident enough now, just with what I know from second semester, that I could probably go to the Holiday carwash right now and tap into that thing.”