News
Good Jobs
MinnPost’s Good Jobs beat is made possible by a grant from MSPWin, a philanthropic collaborative committed to strengthening the workforce in the Twin Cities metro area. MSPWin plays no role in determining the content of the coverage.
Jan. 13, 2017

For many years, professional drivers struggling to make headway in Metro Transit’s extensive hiring process had nowhere to turn. That changed last year when the agency created free classes aimed at helping applicants make the cut.

Initially, those classes focused only on answering application questions for bus-driving jobseekers and providing them with assistance in filling out online applications, which requires computer skills that many candidates don’t possess.

Several months into the online application assistance program, however, the agency’s outreach coordinator, Wolf Tattenbach, noticed a common trend among candidates: Many of them were failing the screening test, which includes questions about map reading, customer service and driving skills.

“Once we got them in and helped them apply,” Tattenbach said, “they would call me and say, ‘Oh, I applied but I did terribly on the map-reading test,’ or ‘I didn’t understand the customer service.’ There are these cultural nuances that they were not able to really grasp.”

This realization led Metro Transit to launch a series of commercial driver’s license (CDL) permit study sessions — which are available at various community centers in the Twin Cities — to help applicants get ready for the test.

Since they began last year, the sessions have become popular among those hoping to be professional drivers in the Twin Cities — and they have grown in curriculum and attendance. In 2016, for instance, the sessions were offered four times a year. This year, they’re available every other month.

Today, the current sessions — which will run through Jan. 26 — are offered six hours a week at south Minneapolis’ Urban Ventures on Tuesdays and Thursdays and at north Minneapolis’ Twin Cities Rise on Wednesdays.

On a recent afternoon, five applicants gathered at Twin Cities Rise — a workforce readiness organization serving metro-area communities — to go through CDL permit test tips with Tattenbach, who is teaching the sessions for the second year.

Most participants in the sessions are individuals who have submitted a bus-driver application to Metro Transit and are scheduled (or planning) to take the mandatory pre-employment test or those who have failed the test and are preparing for a retake.

Come drive with us

In addition to the sessions, Metro Transit has recently launched a “come drive with us” marketing campaign to recruit potential drivers at a time when the agency continues to lose drivers to retirement.

“We started to reinvent ways to reach further and cast our net wider beyond the traditional methods of recruitment,” said Christine Kuennen, Metro Transit assistant director of bus transportation. “We invest in outreach, boots on the ground and connections to these community groups to really highlight Metro Transit as a premier employer and bridge barriers in applications.” 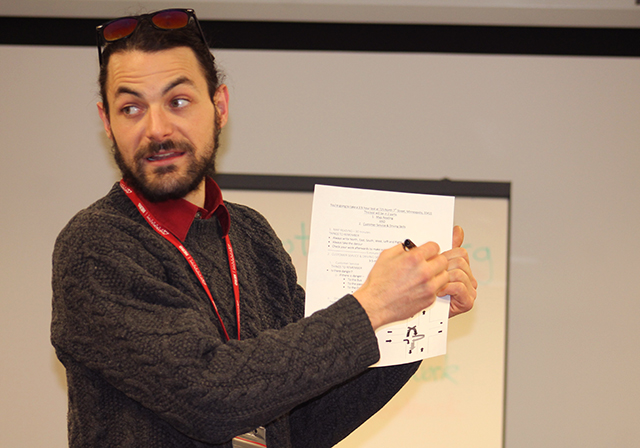 The campaign includes “we’re hiring” and “help wanted” signs on Metro Transit buses and buildings and flyers advertising bus-driving jobs, that the state agency representatives say have become more in-demand since 2014 when more operators shifted to jobs with the Green Line light rail.

On top of that, the campaign takes the hiring message to community centers and neighborhood gatherings as well as disseminating the information through the Twin Cities ethnic media organizations that communicate in the Somali, Spanish, Oromo and Hmong languages.