News
Good Jobs
MinnPost's Good Jobs beat is made possible by a grant from MSPWin, a philanthropic collaborative committed to strengthening the workforce in the Twin Cities metro area. MSPWin plays no role in determining the content of the coverage.
March 8, 2017

As high schools, especially those in Greater Minnesota, struggle to offer vocational training for in-demand career fields like healthcare, manufacturing and construction, legislators are looking to make student access to what’s known as career and technical education (CTE) a little easier.

On Monday, Rep. Jim Nash, R-Waconia, proposed legislation that would allocate $1 million in tax credits for businesses as part of a plan to create a vocational apprenticeship pilot program at 10 high schools across the state.

“We put a lot of focus on creating opportunities for students to go to a 4-year college and to pursue a great career that way,” Nash told reporters, adding that support for students interested in trade professions has largely fallen by the wayside. “We have been a country, for years, that has been very much built by hard work, people using their hands. And I think we’ve deemphasized that to the point where we have to do something like this to reinvigorate it.”

The bill, HF 1944, would create Vocational Postsecondary Enrollment Options (VPSEO) for high schoolers age 16 or older. Much like traditional PSEO courses — which offer secondary students an opportunity to study at a participating postsecondary institution for dual credit — VPSEO courses would take students out of the classroom and allow them to study on site, whether it be alongside an electrician, a welder, a builder, a CNC machine operator or some other trades expert. Each apprenticeship would last at least eight weeks, with the participating student averaging 10 hours on site per week.

“We want them to actually be in the business and be alongside that person that’s going to be apprenticing them and be hands on — on the gear, or on the machine that they’re learning on — because that’s where the real value comes [from],” Nash said.

As proposed, students enrolled in an apprenticeship would be guaranteed high school credit. Looking at PSEO as a model, Nash says he’d like to work it out so that students get postsecondary credits as well.

Patrick Devine, superintendent of Waconia Public Schools, said he sees the bill as a way to generate more excitement around the trades in schools. “I know those students that want to go that path sometimes feel like they shouldn’t go there because we’ve been pushing the 4 -year college so hard with every student in the college prep journey that we’ve had,” he said. “It’s been a great journey, but we don’t want to leave kids out there that have different passions.”

Brad Lundell, executive director of Schools for Equity in Education, a consortium of districts across the state, echoed the need to support students who are interested in entering the workforce straight out of high school. And that doesn’t necessarily mean they won’t end up going to college later on, perhaps with a clearer objective. 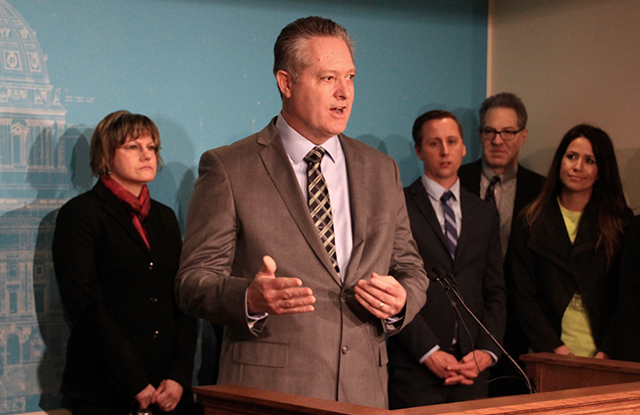 MinnPost photo by Erin Hinrichs
Superintendent of Waconia Public Schools Patrick Devine sees the bill as a way to generate more excitement around the trades in schools.

“Often times what we see with students who go into vocational courses [is] sometimes, after a few years, they might head back to college because they understand the needs,” he said. “They can go further with what they’ve learned in an applied setting.”

Even without any college experience, those who enter the trades can “live the American dream,” says Melissa Redman, general manager of T. Scherber, a local demolition and excavating business. Offering an example, she says they have a 23-year-old employee whose annual salary this past year was $79,000. He doesn’t have a college degree — or the accompanying debt. “This is very exciting for small business owners to be able to connect with the next generation of workers,” she said.

The proposed legislation offers up to $2,000 in tax credits per apprentice to help offset the expenses incurred by participating businesses. If approved, interested high schools and businesses that agree to work in partnership can begin applying to the pilot program by Nov. 1, 2017. Applicants would be selected on a first-come-first-served basis, with program implementation beginning at the start of 2018. By Feb. 1, 2020, the Legislature would review the cost, reach and impact of the pilot program.

“I hope we will be able to have this signed into law this year so we can study the results, see how it’s working,” Rep. Jenifer Loon, R-Eden Prairie, said. “And if it’s working well, let’s roll it out across the state because we are not reaching all the students we need to with their plans for post-high school. This is another way to make sure we are individualizing opportunities and education for all of our students.”