News
Good Jobs
MinnPost’s Good Jobs beat is made possible by a grant from MSPWin, a philanthropic collaborative committed to strengthening the workforce in the Twin Cities metro area. MSPWin plays no role in determining the content of the coverage.
May 26, 2017

Though manufacturing executives across the state are optimistic about the financial future of their companies and project revenue growth, they’re struggling to attract qualified workers to help them get there.

That’s according to a recent The State of Manufacturing report by Enterprise Minnesota [PDF], a nonprofit consulting organization that works with employers in the industry and helps raise awareness about manufacturing in the state.

Since it began conducting the annual survey in 2008, Enterprise Minnesota has seen an increase in the economic confidence among manufacturers as the economy has improved following the Great Recession.

Today, 94 percent of manufacturing executives statewide say they’re confident about their futures, the highest number researchers have recorded in the past nine years, and only 6 percent say they’re not.

These companies are also projecting significant growth in both their revenues and number of employees, and that growth is especially widespread among small manufacturers in the Twin Cities metro area and in Greater Minnesota.

The struggle to find qualified employees has remained a consistent concern for manufacturers, one that’s particularly acute for larger employers and those in Greater Minnesota. 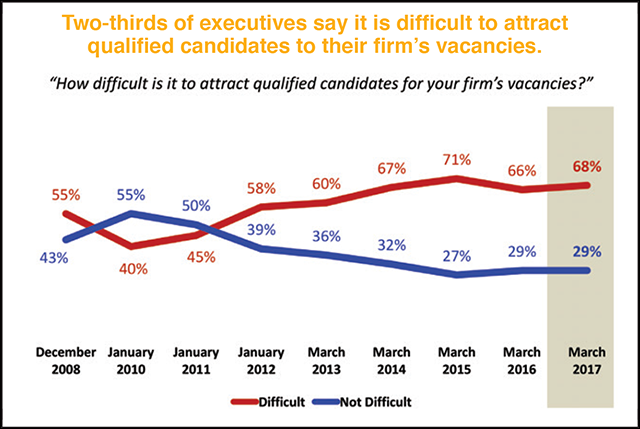 In fact, manufacturing executives noted that attracting and maintaining qualified employees is the biggest challenge the industry faces, with 68 percent saying they can’t find enough skilled workers. “The difficulty is even more pronounced in Greater Minnesota (75 percent) than in the metro (62 percent),” notes the report. “Perhaps because of this, the concern over qualified workers has grown by 40 percent in Greater Minnesota, while only 23 percent in the metro.”

There are several reasons why these companies are struggling to find the employees they need. One reason is that applicants don’t have the skills or education required to do many of the jobs available, say executives. Another is that fewer people are interested in applying for manufacturing jobs — or the companies are too small to competitively recruit and retain qualified workers.

There’s yet another challenge for manufacturing companies in Greater Minnesota: Young people are increasingly leaving the area for larger urban areas.

For manufacturers throughout the state, the most in-demand employees are entry-level machine operators, assemblers and welders.

“Only 4 percent of manufacturers say their greatest need, when it comes to hiring employees, is to get employees with four-year college degrees,” said Rob Autry of Meeting Street Research, which conducted the survey for Enterprise Minnesota, during a presentation of the study at the Minneapolis Convention Center earlier this month.

‘They have to innovate things’

The need for skilled workers is even more important now, said Enterprise Minnesota Executive Director Bob Kill, as baby boomers continue to age out of the workforce. That’s because their retirement is having an impact on about 30 percent of manufacturers across the state.

“They realized the average manufacturing workforce is aging,” Kill said of the executives. “With the shrinking workforce to recruit from, they have to innovate things, and I think they are.”

Kill talked about how more and more companies continue to partner with nonprofit organizations, high schools and community colleges in an effort to recruit and provide students with paid internships — as a way to entice young people to careers in manufacturing.

Such career pathway initiatives have in recent years become more common in both the Twin Cities metro and Greater Minnesota communities. “It’s been a looming issue for a long time,” Kill said. “Now, businesses, academic institutions and economic development agencies are banding together … to address these issues.”

Another way companies are addressing the skills gap, Kill added, is that many executives have talked about improving wages — with 95 percent of them expecting some sort of employee pay increase in the coming years.

The big concern for Minnesota manufacturers: a lack of workers