News
Good Jobs
MinnPost’s Good Jobs beat is made possible by a grant from MSPWin, a philanthropic collaborative committed to strengthening the workforce in the Twin Cities metro area. MSPWin plays no role in determining the content of the coverage.
May 30, 2017

Last summer, when Amazon completed its gigantic fulfillment center in Shakopee and announced it was hiring thousands of employees, some people wondered how workers would get there.

Today, the answer is apparent on the streets of Minneapolis’ Cedar-Riverside neighborhood: The company sends coach buses that take hundreds of employees to and from its Shakopee campus every day.

On a Thursday last week, Abdulhakim Dirir was among dozens of Amazon workers clinging to their lunch bags as they slowly streamed out of the bus at 5:45 p.m. after a 10-hour shift of sorting packages.

“I work six days a week,” said Dirir, who lives in one of the Riverside Plaza high-rise apartments and has been an associate with Amazon since October. “The bus picks me up in the morning and drops me off in the evening. It’s really convenient.”

The service in Cedar-Riverside is similar to those established in other places where Amazon has large workforces, including Seattle and New Jersey. It grew out of a partnership Amazon established with the Confederation of Somali Community of Minnesota, the nonprofit run by Minneapolis City Council candidate Mohamud Noor, as part of a workforce program that linked local employers with workers from the neighborhood.

That program, Shaqodoon, helps job seekers with everything from writing resumes and cover letters to hosting job fairs and providing employment application assistance.

A few months after it was started, Shaqodoon came to the attention of an Amazon executive looking to find low-skilled employees for the Shakopee warehouse — jobs that pay between $13 and $16 an hour, and that come with health care benefits and tuition assistance.

Noor said he told the executive that many people in the neighborhood don’t have reliable transportation to get to Shakopee. Hence the buses. By November, Amazon sent its first shuttle to Cedar-Riverside, transporting hundreds of employees the company had hired for temporary jobs for the holiday season.

Amazon did not respond to several requests for comment. 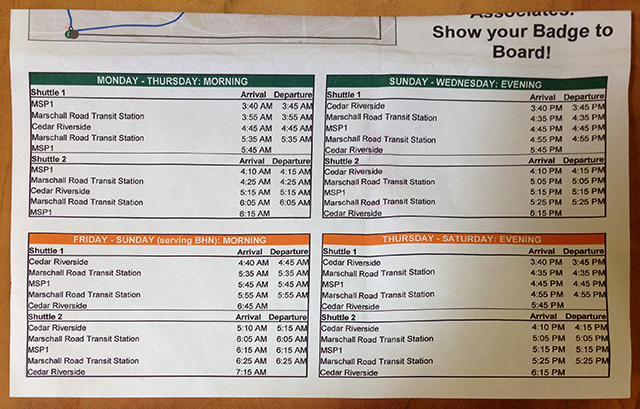