On Friday, Jolon Cotter reached an important milestone: He concluded a three-month summer internship at the Arlington Hills Community Center in St. Paul — a program that has helped develop the skills he’ll need to survive in today’s workforce.

That hasn’t always been the case for Cotter. Just a couple of months ago, when the 16-year-old first thought of looking for a job, he didn’t know where to start, or even how to write a résumé. So he turned to Right Track, a program that — in partnership with the City of St. Paul, local high schools and business leaders  — connects young people to paid summer internships.

This summer, Cotter was among hundreds of young St. Paul residents who received employment training and summer jobs through the program, which was established in 2014 to prepare the next generation of workers and address unemployment issues in the city’s communities of color.

Not only is Cotter now capable of searching for jobs, writing a résumé and preparing for interviews, he also has people he knows he can turn to if he ever encounters challenges in the workplace. “I’ve had the opportunity to meet people who can mentor me and help me learn how to progress in my future career,” he says.

The birth of Right Track

For more than a decade, the City of St. Paul offered disadvantaged and at-risk high school students paid summer jobs in community services through what was known as the Youth Jobs Corps (YJC) program.

Because the City of St. Paul was the only source of the program’s funding, though, YJC could only accommodate a couple of hundred students. But as the state’s economy began to strengthen, local business leaders started to consider providing internships.  That way, employers — including those in the financial, health and nonprofit sectors — would be able provide participants with both career development skills and a decent summer wage.

To reflect the changes, in 2014 YJC was rebranded as Right Track, which has two primary components: one, city-subsidized internships in government agencies; and two: employer-paid internships in various industries.

During the 2016-2017 school year, Right Track trained and placed nearly 900 young people in jobs in St. Paul, with most of those participants coming from communities of color.

“A big part of what Right Track is doing is preparing the next generation workforce,” said Asha Shoffner, who runs the program. “There are a bunch of folks that are retiring. If we don’t help properly prepare young people to fill those roles, then our workforce is going to be in trouble.”

At the beginning of each school year, Shoffner and her team visit high schools and community centers in St. Paul to promote the various employment training and jobs offered under Right Track.

Those recruited for the program then participate in a series of training sessions providing core skills, such as résumé writing, networking, leadership development and workplace communications.

“We talk about the importance of prioritizing and organizing your schedule,” said Sterling Brown, a program liaison. “We tell them that it’s important to work and to hang out with their friends; but they need to schedule that time out.”

After the training, the students have the option to choose from a list of companies where they can do their summer internship. Some are placed in part-time jobs; others full-time. All get paid at least the state minimum wage. 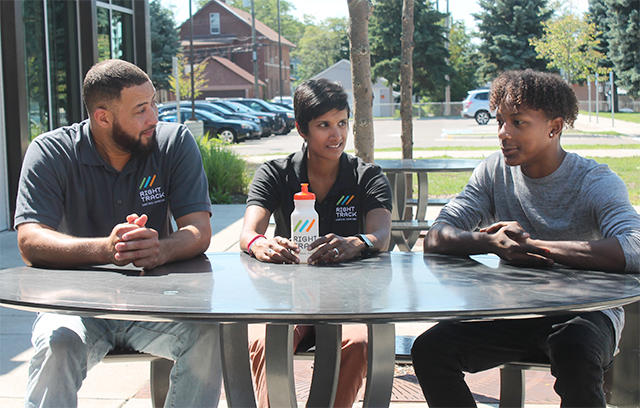 Once the students land their internships, they continue participating in Right Track’s weekly training program to learn about financial literacy, workplace communications and professional development skills in Excel, PowerPoint and Microsoft Word.

“Our students are getting work experience,” Shoffner said. “But they’re also getting that extra support from our supervisors and program liaisons in order to gain leadership skills and personal growth.”

During his June-August internship at Arlington Hills Community Center, Cotter said, he played a leadership role in setting up the center’s annual Munchies, Movies, and Music (MMM) event.

“MMM was meant to bring youth together and connect them to the community and get people show off their talent,” he said. “I got to experience what it’s like to take charge and organize something with a group and have it work out.”