The 2016 election brought a renewed national focus on the plight of the blue collar worker in the modern American economy. With the bulk of growth in well-paying jobs happening in more skilled sectors, where is the worker without a four-year degree to go to find work?

Minnesota, for one, according to a new report from researchers at Georgetown University's Center On Education and the Workforce, which ranked Minnesota among the top states for share of good jobs for workers without bachelor’s degrees, after Wyoming, New Jersey, Maryland, Connecticut and Utah.

Nearly half — 45 percent — of “good” Minnesota jobs, by the study’s definition, were held by workers without a bachelor’s degree, compared to 50 percent in Wyoming, the top state, and 33 percent in Kansas, the bottom state.

The researchers defined a good job as one that paid $35,000 or more annually, or $45,000 or more for workers age 45 and older. The cutoff, $35,000 is about $17 an hour, which is what some experts call a living wage, with the assumption that workers over age 45 should be making more money than younger workers.

“It’s the beginning of self-sufficiency, the beginning of entry to the middle class,” said Jeff Strohl, the director of research at Georgetown’s Center on Education and the Workforce and an author of the report.

Top 10 states for share of good jobs for workers without a bachelor’s degree
The researchers defined "good jobs" as those that pay over $35,000 annually or over $45,000 for workers who are age 45 and older.
Source: "Good Jobs That Pay Without a BA," Georgetown University

There used to be a lot of these good jobs available, largely in manufacturing.

Between 1991 and 2015, the share of good jobs held by workers without a four-year degree dropped from 60 percent to 45 percent. Not only has globalization changed the dynamics of manufacturing, with many goods sold in the U.S. made overseas, but manufacturing is one of the biggest casualties to automation. Much of the overall decline in good jobs available to workers without a four-year degree is attributable to the manufacturing industry employing fewer and fewer people, Strohl said. 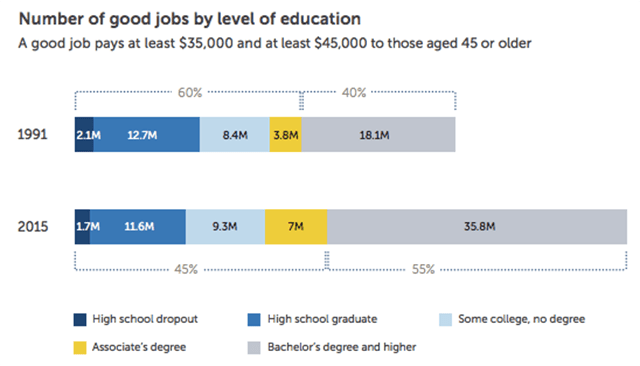 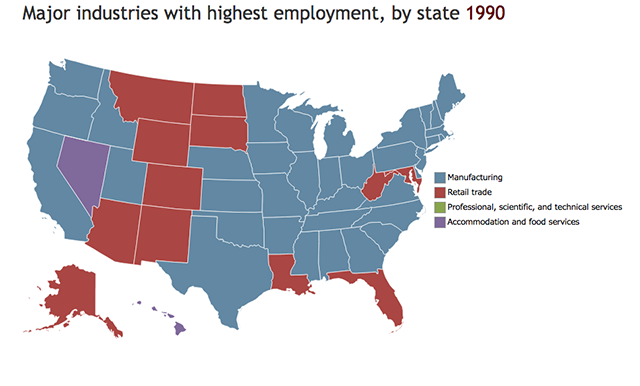 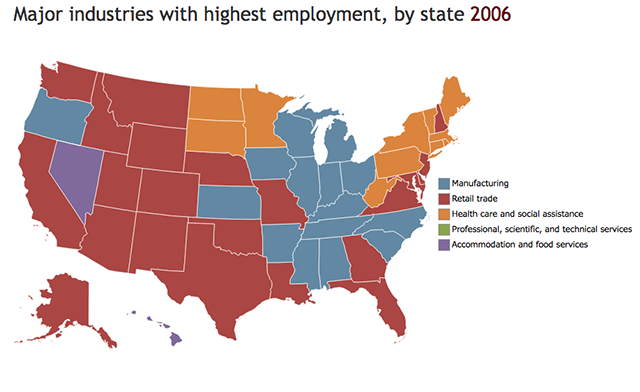 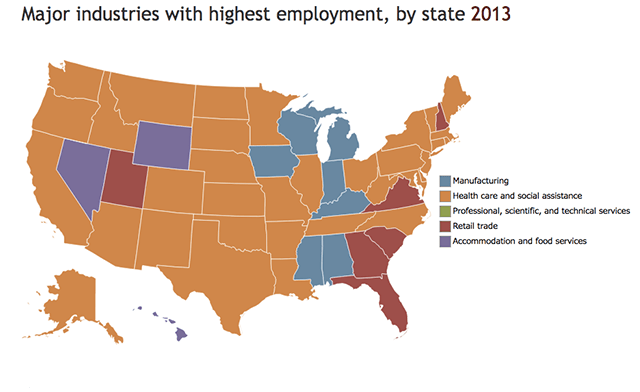 The decline in employment in manufacturing doesn’t mean there are no opportunities for workers without advanced degrees. Growing industries that provide good jobs to those without a four-year degree include financial, consulting and business services, wholesale and retail trade, construction, leisure and hospitality, health care, government and education services, and natural resources.

In terms of demographics, 70 percent of good jobs available to workers without a four year degree are held by men. While the share of good blue collar jobs held by whites declined from 83 percent in 1991 to 67 percent in 2015, they still represent the majority of blue collar workers with good jobs.

One reason the Minnesota economy might be doing well in creating opportunities for workers without a bachelor’s degree is that it has higher shares of employment in fields like manufacturing and health care services. Those sectors tend to have more opportunities for people without college degrees.

In Minnesota, 11 percent of employment is in manufacturing, compared to 8.6 percent in the U.S. according to Oriane Casale, assistant director of the Minnesota Department of Employment and Economic Development’s Labor Market Information Office. Plus, Minnesota’s manufacturing sector is more focused on durable goods (goods that last for more than three years) which tend to be more expensive to manufacture and transport than nondurable goods.

Minnesota also is in a position to “export” health care, with people coming in from the region, the U.S. and the world for medical care.

“Just in terms of nursing and residential care facilities, our share of employment overall is 3.7 percent in that industry, and nationally it’s only 2.3 percent,” Casale said.

Average annual earnings are higher in Minnesota than for the U.S. as a whole for people of all education levels, Census data show, but the pay gaps between Minnesota and the U.S. tends to be bigger for those with less education.

In light of increasing automation and globalization, Strohl says workers without a bachelor’s have done a good job of adjusting to a changing economy.

Oftentimes, finding new opportunities involves going back to school in degree or certificate programs. For that reason, it makes sense to see states with good career and technical colleges, which align programs with workforce needs, come out ahead in employment of workers without a four-year degree.

“If policymakers want to get serious about restoring the health of the middle class, mapping this education and workforce landscape — both the educational pathways and the occupational pathways available to workers at different levels — is crucial,” the Georgetown report authors note.