In a tight labor market, relying on job ads is no longer an effective technique for finding qualified workers to fill job vacancies.

That’s a reality that managers at the Oakdale-based Twin City Hardware (TCH) came face-to-face with some years back as they experienced difficulties finding workers to join the company.

The chief reason TCH couldn’t attract enough employees would be familiar to almost any employer in the region: the persistent workforce shortage, which has become more pronounced as baby boomers have started to leave the workforce for retirement.

Beyond that, a couple of other factors exacerbated TCH’s struggle to draw enough workers. First, the company has expanded over the past five years, which has meant a need for more personnel to drive that growth. Second, TCH specializes in the production of doors, frames and security technology, a relatively narrow field within the construction industry — which means that most people hardly know about it, even those teaching or studying the construction profession at higher institutions.

“Most schools don’t teach what we do,” said Matt Oberlander, TCH’s operations manager. “You go to school for construction management and you learn how a building goes up and all the different subcontractors that work on it. But they never really talk about doors, frames and hardware.”

To change that, Oberlander and his team embarked on a campaign three years ago to reach out to career training programs at community colleges and universities in the Twin Cities, giving students glimpses of what TCH does and inspiring faculty members to create classes that expose students to some of the skills the company needs.  “We used to just post jobs and hope somebody good would apply,” Oberlander said. “Now we’re out there in colleges and universities, actively looking for people.”

But also did something else: Last spring, TCH launched a program that aims at recruiting new employees for potential positions — by hiring them before there are even job openings.

The eight-week program offers the employees the skills necessary to thrive in the company, which has various positions in multiple departments such as welding, woodworking, engineering, project management and customer service.

During the training, the employees gain general and specific skills as they perform entry-level tasks for different departments. They can then transition into actual jobs when someone retires or quits, or if new positions are created.

“Knowing that this industry is not something that people have experience in, we’ve decided we need to go out and find people,” Oberlander said. “Once they’re here, we train them and find a spot for them. That way, we don’t have to start over every time we’re on a short time frame.”

Reaching out to students

One way the company has been recruiting some of these trainees is through its participation in career fairs at colleges and universities in the Twin Cities metro area, including the University of Minnesota, Dunwoody College of Technology and Saint Paul College.

But TCH managers aren’t just going to these institutions to recruit potential employees. They’re also serving on school advisory boards to advocate in part for creating courses that offer the specific skills the company needs.

In these meetings, Oberlander said, he realized that it’s not just professionals in the construction industry who are less familiar with the company’s work; architects also “don’t know anything about” the field and the special skills needed to produce doors, frames and hardware.

So Oberlander made it his mission to put the information about the need for those skills before college students, school administrators and his counterparts on advisory boards. “For us, we get a good exposure and a couple of candidates out of it,” he said of the outreach initiative. “For colleges, students get a better overall picture of the construction process and some of the other little pieces.” 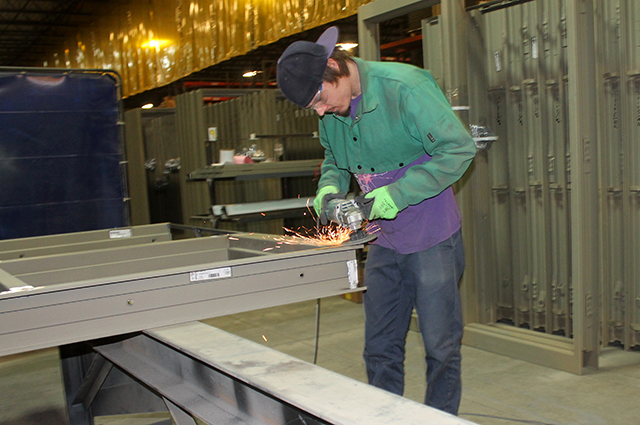 MinnPost photo by Ibrahim Hirsi
The eight-week program offers employees the skills necessary to thrive in the company.

TCH is also working on a plan to donate equipment to some community colleges as part of its campaign initiative. The effort is aimed at enhancing the skills of students interested in learning how to install doors or fix closers.

“Those types of people, when they come out, are going to have a better knowledge of what we do and they might want to come work for us,” Oberlander said. “So, supplying them with some of those materials … would enhance their learning ability. It also gets our name in front of some of those students ahead of time.”

TCH is far from the only employer that has reached out to educational institutions for potential employee recruitment. Rainer Haarbusch, dean of career and technical education at Saint Paul College, said that companies throughout the Twin Cities come to the school on a regular basis to work closely with faculty members and students.

Some of these employers, he added, attend the advisory board meetings to keep career program administrations updated on current and future trends in their respective industries. “In order to understand what an industry needs,” Haarbusch said, “we need constant feedback from employers to shape our curriculum … and to prepare our students for a better future.”

The benefits for the employers can be substantial. Because of its collaboration with the schools, Oberlander said, TCH has seen a radical improvement in its hiring process. The company today maintains a flow of ready employees that come through its college recruitment and the internal eight-week training program.

Kyle Reinsberg, a welder, is one of the latest hires to join the company through Saint Paul College. In his second semester at the college, Reinsberg — who spent three years as a butcher at a meatpacking plant — had started to look around for a job in welding.

“So I asked my instructor and he referred me over to Twin City Hardware,” he said. “What I really like about this company is the leniency during the school time.”

Reinsberg then told his classmate, Cameron Pawelski, who had been looking for a job, about an opening at TCH. Pawelski then applied for the position — and he got hired to become a welder.

Doing the metal grinding, finishing and fabrication work wasn’t an issue for Pawelski when he first started working at TCH. That’s because he already had those skills from learning welding at Saint Paul College.

What he didn’t have, however, were some of the specialty skills that TCH needed: installing wooden doors and fixing hollow metal frames. So he participated in the company’s weeks-long training program to bring him up to speed. “They do a pretty good job of teaching you that stuff,” he said. “They start off with the basics and you work your way into some more specialized things as your time grows there.”

Indeed, in today’s tighter labor market, Oberlander said, recruiting people like Pawelski with the expectation of providing them with more training opportunities has become the new normal among many employers.

“We have to go out and find those people and start building that backlog of good people now so that when we start to lose people, they’re there already,” Oberlander added.