News
Good Jobs
MinnPost’s Good Jobs beat is made possible by a grant from MSPWin, a philanthropic collaborative committed to strengthening the workforce in the Twin Cities metro area. MSPWin plays no role in determining the content of the coverage.
July 20, 2018

On a recent evening, Rica Highers arrived a little early to set up the community room inside the Ramsey County Library in Maplewood, where a group of interpreters were scheduled to meet the state’s top court administrator, Jeff Shorba, to discuss wages for independent spoken language interpreters working in district courts throughout Minnesota.

While Highers, an organizer with the Minnesota Newspaper and Communications Guild, arranged the chairs, she kept an eye on the door, asking the incoming attendees — most of whom were Spanish, Hmong and Somali speakers — to either take buttons and stickers that read “INTERPRETERS UNITED FOR RESPECT” and “INTERPRETERS DESERVE RESPECT.”

The meeting was the latest attempt to convince officials from the Minnesota Judicial Branch, which oversees courts in Minnesota, to adjust the current payment policy, which has barely budged in two decades. While members of the group awaited the arrival of Shorba, they turned to each other in twos and threes for small talk about the weather, work and the library — as if they were at a cocktail party.

Once Shorba made his entrance, though, the mood changed. There were no greetings or smiles. Shorba sat on one side of the room, the interpreters on the other. When a small number of the interpreters got up to speak, they talked about their importance in the judicial system, to people throughout the state. But more than anything, they talked about their pay, how they were treated — and what it said about who and what the courts value in Minnesota.

Many spoken language interpreters view their service in the court system as crucial as that of the defense lawyers, prosecutors and other key players in the justice system.

To ensure access to equal justice for individuals with limited English, the judicial branch employs hundreds of professional spoken language and ASL interpreters, who not only serve defendants but also victims, witnesses, prosecutors and judges on various cases, in family, civil and criminal matters.

And while $52 may seem like decent pay — the median wage in Minnesota is about $20 an hour — that number can be misleading in regards to what interpreters actually bring home. Because of the way MJB sets up schedules, said Sally Nichols, a certified Spanish interpreter who’s been working with district courts in Minnesota for the past 28 years, interpreters like her can only work four hours a day — a two-hour session in the morning and a two-hour session in the afternoon.

That means Nichols makes gross income of about $45,000 a year. And interpreters who speak ethnic languages that aren’t as common in Minnesota make less, since there are fewer opportunities to pick up work. What’s more, because interpreters are independent contractors, they don’t get paid vacation days, paid sick time, or paid holidays. “So we have to work more to make the same as other people,” Nichols said.

Certified Hmong interpreter Kazoua Yang, who worked for the state for two decades and helped create the initial interpreter payment policy in 1997, says it’s not a coincidence that MJB has different payment policies for the two interpreter groups.

While Yang acknowledges that the sign language profession is more established, she believes the disparate treatment of spoken language interpreters has a lot to do with the fact that sign language interpreters and their clients are often white, native-born Americans with a long history of challenging the state when it violates the Americans with Disability Act, which protects deaf and hard of hearing individuals.

“For me, as a person of color, I believe it’s about our color,” Yang said. “All of the ASL interpreters are white. Their clients are white. They can speak up; they can file a lawsuit. [But] all of our clients cannot even speak English.”

“When I was working for the state, if we couldn’t find a sign language interpreter, their attorney would call the state and they would sue us for not having an interpreter,” said Yang. “Immigrants and refugees are very nice that they don’t speak up and they are afraid of the system because they think they don’t have rights.”

The fight for better wages

In 2010, interpreters began to talk among themselves about ways they could improve their pay. By 2015, a group of interpreters banded together to create a group called Lingua to help drive that agenda.

Since then, Lingua has held a series of meetings with MJB officials, demanding an increase in wages for spoken language interpreters. In 2016, in response to those demands, the judicial branch conducted a market study survey, comparing its pay for contract interpreters with that of other public agencies, including the Hennepin County Attorney’s Office, the Minnesota Department of Human Services, Bloomington Immigration Court and the Mayo Clinic.

MJB found that its interpreter payment was on par with most public agencies in the state. Even so, officials increased interpreter pay by $2 an hour for the spoken language interpreters in 2017, though the rate still falls well below what interpreters make in the private sector, which can be as much as $90 an hour.

The meeting in Maplewood was intended to convey a simple message to MJB administrator Shorba: the $2 increase from 2017 wasn’t enough.

The interpreters emphasized the importance of their role in the justice system, and the fact that refugee communities in Minnesota are facing a shortage of interpreters because of better pay in the private sector. Speakers also pleaded with Shorba him to stand with them in advocating for better pay at the Legislature.

Then it was Shorba’s turn to talk. “The Judicial Council asked me to come to this meeting on their behalf to talk about some of the issues you’ve been raising,” he began.

He quickly made it clear that MJB was not going to consider a pay increase for interpreters after the changes that were made last year — a reference to the $2 per hour increase.

The mention of the $2 bump sparked a vociferous response among the crowd. “$2!” the event’s organizer, Rica Highers, shouted. “I can’t buy coffee with $2. Come on!”

“It’s an increase, whether you like it or not,” Shorba replied. “We made the increase based on a market study.” 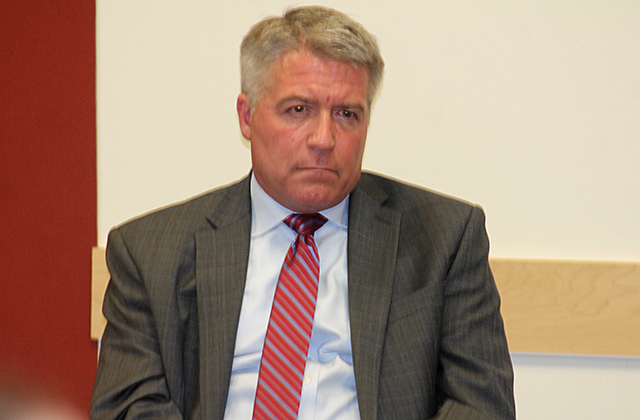 Highers pushed back against that argument, citing a 2017 MinnPost story in which Shorba  testified before a legislative committee on behalf of raising salaries for judges, saying that “we are not able to gain the interest of highly competent lawyers if we’re not able to keep salaries competitive.”

Highers asked why the MJB looked only at the public sector to decide spoken language interpreters’ payment, but the overall market rate when looking at salaries for judges. “What’s the difference here?” Highers asked. “Why is there a completely disparate set of rules being applied?”

Marianne McEvoy, a certified court interpreter and member of the Lingua group, asked Shorba a question that seemed most important to many in attendance: “Will you stand with us or not?” in asking the Legislature to give interpreters another raise.

“No,” he replied. “I will not be asking the Legislature for an increase the market rates will not support.”

The meeting ended abruptly after that, even if the interpreters efforts wouldn’t. “We’re not done,” Highers told MinnPost as she prepared to leave. “We know that there are a lot of people who are up for elections right now. They’re probably looking for us to turn out to vote in these midterm elections and this might just become one of those issues that people might vote on.”