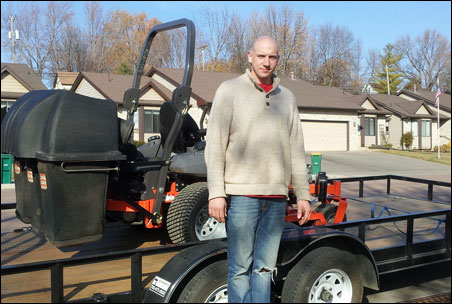 MinnPost Photo by John Fitzgerald
Nicholas Hoese is building a lawn-care and snow-removal business in the Watertown area.

This week, Rural Minnesota: A Generation at the Crossroads will be focusing on several young people who have chosen to live and work in some of Minnesota’s smaller towns — some for a little while, and some, like Nicholas Hoese, for the long haul.

WATERTOWN, Minn. — Watertown has a lot in common with its defining natural landmark, the Crow River. Both are small enough to be overshadowed by bigger neighbors but substantial enough to keep generations living by its shores.

Watertown, a city of 4,000 in northwest Carver County, has seen boom and bust periods since it was platted in 1856. It remained a regional hub with several grocery stores and plenty of amenities until the 1980s, when the farming crisis coupled with growth in the western suburbs turned the town on its head. Businesses folded and Watertown hunkered down for a long economic nap.

As Minnesota stares down another year in the Great Recession and metropolitan expansion is stunted by gas prices and lending difficulties, is Watertown doomed or will young people stay and bet their economic future on the town?

I sought out Rose Rosdahl, a pharmacist at Watertown Pharmacy and president of the town Chamber of Commerce, and asked her if she knew of any young people who were staking their claim in Watertown. Her example wasn’t far away. She put me in contact with Nicholas Hoese, a 26-year-old who has lived his entire life in Watertown.

Hoese is married, has bought a house and is building a business slowly but very surely in Watertown. Not only that, he’s a volunteer firefighter, a member of the Chamber of Commerce, and was recently elected to the City Council.

So why is he staying?

“It’s just got that great small-town atmosphere,” he said over a cup of coffee at the Crow River Coffee Company. “It’s got most of the services you need except Wal-Mart and Home Depot.”

I point out that if Watertown did have a Wal-Mart, it would likely bleed small businesses out of the town and make Watertown a very different place — neither quaint nor homey. He agreed that Watertown, flying under Wal-Mart’s economic radar, might be a very good thing and perhaps could be the key to the town’s survival.

On the edge of urban
Because it is in Carver County and Carver is one of the seven counties that make up the seven-county metro area, Watertown is under the gaze of the Metropolitan Council. So I explored its prospects in a conference call with Mark Vanderschaaf, the director of planning and growth management; Libby Starling, the council’s research manager; and Tom Caswell, the senior representative local planning assistant for the Watertown area. I recalled to them a time when U.S. Highway 212 meandered along the Minnesota River bluffs and the only access to Shakopee was over the State Highway 101 bridge or by driving past the Gedney pickle factory vats into  Chaska and taking the State Highway 41 bridge into downtown Shakopee. Today, U.S. Highway 169 blasts across the river like Bifrost and both Chaska and Shakopee are bloated versions of their former selves.

“The key in what you said is when highways come through,” Starling said. State Highway 7 runs about four miles to the south of Watertown and U.S. 12 runs about eight miles to the north, while State Highway 25 runs through town. None are more than two-lane roads. “There isn’t the money available to expand those highways, and there are no plans to do so in the future,” she said.

Caswell adds that there are 4,000 people in Watertown today and projections are for the population to double by 2030. “Even so, that’s only 8,000 people,” he said, and the growth will likely be less than predicted because economic growth trends have been slower than they’d  anticipated.

Not an Anoka or Chaska
“We don’t see Watertown being completely absorbed like Anoka was years ago, or for the density to grow so transportation needs will have to grow with it, like Chaska,” Vanderschaaf said. Starling said the Met Council does predict growth in areas such as Maple Grove and Woodbury which are along existing transportation lines, but third-ring suburbs that overdeveloped their housing inventory in the early 2000s will have to recover before they see any growth.

Towns such as Watertown, which avoided much of the housing overdevelopment, will stay as they are long into the future.

What does this mean for Nick?
If Watertown stayed the same, that would be just fine with Hoese. He was born in Watertown to Dennis and Barbara Hoese in 1985 and graduated from Watertown-Mayer High School in 2004. He kept his high-school job as a grocery clerk at the Delano Coborn’s while he pursued his dream of becoming a police officer. After taking a few classes, he decided being a cop wasn’t a good fit. He briefly considered moving up the chain at the grocery store, “but I asked myself, do I really want to be working in a grocery every day for the rest of my life?” he said.

That’s a fair question. If the answer is no, then what did he want to do with the rest of his life? “I always liked pushing snow and cutting grass,” he said.

And thus the seed of a business was born. Staying at Coborn’s, Hoese took classes at Ridgewater Community College in Hutchinson and graduated in 2008 with an Associate’s Degree in Marketing and Sales Management.

It was a year earlier that he began his snow-removal business. His parents had once owned a dairy farm, and although they auctioned off their equipment when the farm folded, they kept a skid loader. Hoese contacted local businesses and got contracts to clear parking lots and driveways. Then he went to the bank with the contracts and took out a $12,000 loan on a Chevrolet three-quarter-ton pickup and bought the plowing blade with his own cash.

“But I didn’t want to kill myself with debt,” he said, so he kept his job at Coborn’s and plowed during the winters for three years. When his truck and blade were paid off, Hoese approached area businesses about lawn-mowing opportunities.

“Again, I wanted to go into the bank with the contracts in hand with the idea that I would put every dime into a new lawn mower.” He bought a 30 horsepower Husqvarna lawnmower with a 60-inch deck for $12,000. He bought it in 2010 and has now paid it off. He also works at Marketplace Foods in Watertown.

Hopes to go full time soon
In 2009, he married Mollie, also an employee at Coborn’s, and they bought a house in Watertown on the east side of the river. He hopes to make the lawn/snow business full time soon — “50 or 60 hours a week is what I’m pushing for, but it’s tough out there. Anyone with a lawn mower can come into town and undercut your price. And if I go to other towns, I have to factor in my gas and travel time, which is important in snow removal because everyone wants their lots cleared before the business day. I’ve got my foot in the door and slowly, slowly it will happen.”

He’s been a volunteer firefighter since 2008 — “it’s kind of a family thing. I have six older brothers, and four of us have served” — and is also a member of the Chamber of Commerce. It was at a Chamber meeting that a vacancy on the City Council was discussed.

“It was only $2 to apply and no one applied, so I put my name in and ran unopposed,” Hoese said. He’s been in office for about one year.

Hoese is well integrated into the community — something he doesn’t share with many of his fellow 2004 high-school graduates. Not many of them stayed.

“I see a few at the store, but it’s not common,” he said. “Most went to college far away or just moved away.”

But Hoese has decided to make a stand in Watertown. It’s where his family is and where his business, home and wife are.

“This is where I’ll continue to be.”

John Fitzgerald is a journalist and longtime Minnesotan. He lives in Buffalo.