Part 7 in a series

Maicie Sykes, the lead keeper at the Lake Superior Zoo in Duluth, was among the first on the scene when torrential rains flooded much of the city June 20. Two-thirds of the zoo grounds were under water, resulting in the deaths of  14 animals. She talks about those first emotional hours.

I never keep my cell phone in my bedroom, but that night I did, and at 3:30 in the morning I got a call to come in. It was still raining,with police officers closing roads along my normal commute.

The zoo was inundated with flashing lights; there were squad cars in the parking lot and a fire truck had flood lights shining over mud-brown water rising from the Kingsbury Creek. It was impossible to move from one side of the zoo to the other.

Before I arrived, one of our harbor seals was found on Grand Avenue. I was in disbelief and could not grasp the  severity of the situation.

We couldn’t account for some of the major carnivores due to rising water and darkness. At that time, the major concern was that Berlin, our polar bear, might have escaped her exhibit.

We held off major action until morning light for fear that our staff may be injured. The flood water was moving fast and with unaccounted carnivores, we didn’t want to risk an animal attack.

It wasn’t until 5 a.m. that I spotted Berlin and watched her step out of her exhibit. The massive amount of water in her enclosure had allowed her to climb out.

If she was in position to possibly endanger the public, we would have had to take action. As a member of  the zoo’s firearm team, I acquired a shotgun to prepare for the possibility that she might leave the zoo grounds.

Thankfully, while we were dealing with Berlin’s escape, we discovered all the other carnivores were secure and safe.

As one of her keepers, I had cared for Berlin since 2009. As her primary trainer, I’d worked to build a strong bond with her. The possibility of her being injured or killed made me sick to my stomach. 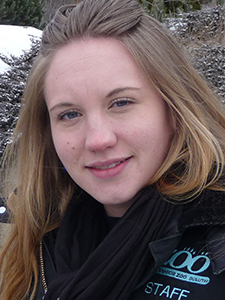 As members of the firearm team, we receive quarterly training, but you never know how you’ll react when an emergency arises.

An armed police officer and I spotted Berlin on the other side of the rushing flood water. One concern was that if she saw us, or got spooked, she’d run across the water at us.

Our veterinarian, Dr. Louise Beyea, had a tranquilizer dart gun, and went with a police officer to get close to Berlin. [Dr. Beyea] executed a perfect shot into Berlin’s rump. Upon feeling the dart, Berlin jolted and began to charge. [Beyea] and the police officer ran back into the police car and reversed up the hill. I saw Berlin charge after the car, but soon the drugs took effect and she was knocked unconscious.

Our vet staff gave her another bump of tranquilizer and rolled the 450-pound bear into a skid steer loader bucket, then placed her into the bed of the zoo pickup truck and brought her to our animal holding area at the Animal Care Center.

I was relieved that she was safe but knew that the day was far from over. The devastation was beyond comprehension, and with the amount of work to be done, there was little time to grieve that day.

That day, Berlin was taken to St. Paul’s Como Park Zoo and is now going to the Kansas City Zoo where she will live and hopefully breed as part of the Polar Bear Species Survival Plan.

After the flood, I went to St. Paul many times to visit her. Having her so close was amazing. It’s sad to think that she’ll be farther away, but I’m excited for her opportunity, and deep down, I hope that she will come back to our zoo some day.

Thursday: “Unemployed in a weak economy: ‘I found myself in a shelter’ “

Duluth flooding at zoo: ‘The devastation was beyond comprehension’