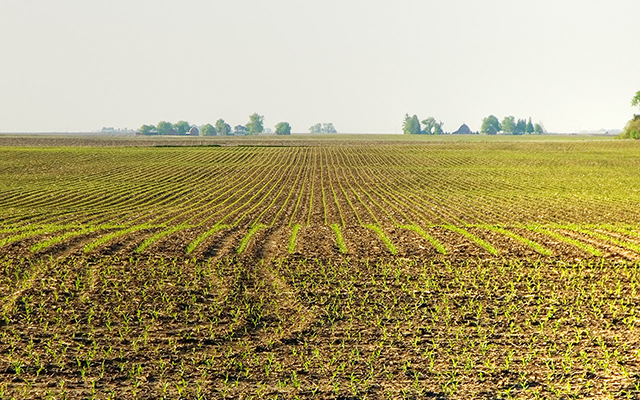 Creative Commons/David MorrisThe average cost of producing a bushel of corn has about doubled during the past 10 years.

While grain farmers have seen a rise in prices paid for their crops in recent years, they are paying more for seed, fertilizer, chemical and other costs. “We’re looking at direct expense of production of corn nearing $600 an acre on rented ground, and close to $450 on owned land,” said Jim Molenaar, regional Farm Business Management director at Ridgewater College in Hutchinson. David Little of the West Central Tribune writes that a 2012 report of central and west central Minnesota crop and livestock farms shows the average cost of producing a bushel of corn has about doubled during the past 10 years. “If we have any kind of return to prices that are more in the $4 range for corn, it’s probably a break-even year with a normal crop,” Molenaar said. With good prices comes less debt, Molenaar said. Farmers reduced their debt from about 47 percent in 2003 to 40 percent in 2012.

In related news, Minnesota farmers are hustling to get their corn in the ground. Good weather allowed the percentage of planted corn acres to jump 52 percentage points to 70 percent, though that’s still below the normal pace of 84 percent, according to the U.S. Department of Agriculture’s weekly crops and weather report. Minnesota farmers try to get their corn planted by mid-May to ensure the best yields. An average of 5.1 days were suitable for fieldwork last week. Soybeans are 23 percent planted. Sugarbeets are 89 percent planted.

Rochester homes are flying of the market, reports Mike Klein of the Rochester Post Bulletin. “Single-family homes in Rochester sold more quickly in April than they have in any April in 10 years,” he wrote. “The average days on market was less than three months — 86 days, down 34 percent from a year ago, and the lowest since 76 in April 2002, according to the newly released numbers from the Southeast Minnesota Association of Realtors.” The median sales price in Rochester was $155,000 in April, he wrote, up 5 percent from $148,000 a year ago. Klein also wrote that home sales in Austin dropped 31 percent from year earlier and the median sales price was down 3 percent to $72,400,while in the Winona/Goodview area, sales dropped 8 percent to 36 in April. The median sales price increased 16 percent to $127,000.

Up in Lake Superior, warming water is affecting big fish, a new report states. John Myers of the Duluth News Tribune writes that scientists found “Increasing water temperatures over the last three decades have made conditions more favorable for chinook salmon, walleyes and lean lake trout but less favorable for cold-water-loving siscowet lake trout.” The study, conducted by the University of Wisconsin-Madison and funded by Wisconsin Sea Grant, estimates that fatty siscowets have lost about 20 percent of their historic habitat because of the temperature changes that already have occurred. The research builds on work at the University of Minnesota Duluth’s Large Lakes Observatory, which found that average Lake Superior surface water temperatures increased 2.5 degrees Celsius between 1979 and 2006, among the most dramatic examples of climate change in North America. “I think our biggest message is that these are changes that already have happened. These are not projections of temperatures years from now,” said Tim Cline, lead author of the report.

Moorhead’s “mediocre” flood this year has some city leaders saying sandbags are no longer a necessary expense, reports Eric Burgess of the Fargo Forum.  Moorhead spent nearly $500,000 for this year’s flood, much of which was spent on 50,000 sandbags to some of the 87 homes still left on the river, City Manager Michael Redlinger told the City Council on Monday. Mayor Mark Voxland said the city has spent around $87 million since 2009 buying riverfront homes and building levees up to 42.5 feet, so paying for the sandbags should be left to those individual homeowners who have declined a buyout offer. The Red hit a preliminary crest of 33.32 feet on May 1. “We didn’t have to make sandbags, and we didn’t have to buy sandbags (the city used bags left over from 2011) and it still cost us almost a half a million dollars,” Voxland said. “The 87 folks that are left along the river really are at a point where they have to pony up something and be responsible citizens themselves for having property along the river.”  “We’re not abandoning these people,” Councilman Mark Altenburg said. “It’s just we won’t provide the same level of service.”

The Hormel Institute researchers have discovered that an agent in milk thistle significantly restricts the growth of melanoma, a deadly form of skin cancer, reports the Austin Daily Herald.  The discovery was made by a research team led by Executive Director Dr. Zigang Dong and is reported in the May 2013 edition of Cancer Prevention Research. Silybin, also known as silibinin, is a bioactive component of the milk thistle plant and has long been used for preventing allergies and liver damage. Studies have shown silybin’s preventive and therapeutic effects against colon, prostate, bladder and lung cancers. Researchers at The Hormel Institute revealed silybin’s molecular targets while investigating its effect on melanoma cell growth. Their study found silybin weakened melanoma growth. “These research findings are especially significant because, although many common cancers are declining, the incidence of melanoma continues to rise at an estimated rate of 3.1 percent annually,” Dong said. Skin cancer is the most common form of cancer in the U.S., and melanoma accounts for 75 percent of skin cancer deaths.

The August Schell Brewing Company of New Ulm has won a couple of awards from the Beverage Tasting Institute, according to the New Ulm Journal. What’s impressive is their description. Here’s BTI’s description of Schell’s Maifest beer: A “brilliant amber color with aromas of grilled pineapple, honeycomb, papaya yogurt and pepper with a round, fruity-yet-dry medium-to-full body and a long, tangy and warming pepper bread, arugula, and roasted nut driven finish.” Here’s the one for Zommerfest: A “rich old gold color with aromas of Denver omelet and butter toast with a dryish, minutely sour medium body and a tangy, Greek yogurt, melon rind, turnip, and lemon pepper-like hop finish.” I dunno, man. Tastes like beer to me.