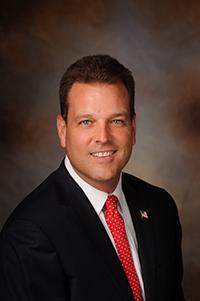 The First District GOP has chosen Aaron Miller to face Rep. Tim Walz in the upcoming election, reports Tim Engstrom of the Austin Daily Herald. “Miller, a senior account hospital manager with Revo Biologic and a command sergeant major in the Army Reserves, said being ‘a private-sector guy’ is his leading strength heading into the general election. Secondly, he has worked in health care for 15 years and wants to see Republicans provide alternatives to Obamacare, rather than call for repeals. … Miller garnered the nomination after the third ballot, when he faced off against Jim Hagedorn, a Blue Earth businessman. Mike Benson, a state representative from Rochester, dropped out after the second ballot.”

Love the warmer weather? Granddaddy, the famous 50-foot snowman in Gilman, isn’t loving it so much, according to Kevin Allenspach of the St. Cloud Daily Times. Greg Novak’s creation has begun suffering the ignominy of old age. “Warmer temperatures and wind after last Friday’s snowstorm blew down the snowman’s broom and caused one of his eyes to pop off along Benton County Road 3 several miles north of Gilman. Novak, a 54-year-old vegetable farmer, rented a lift as he did when he first decorated the snowman in February. This time, he turned Granddaddy’s smile upside down, replaced the lost eye and recovered the broom top, which now sits at the base with the words ‘See ya’ painted on one side. … Novak’s snowman, which has appeared on NBC’s ‘Today’ show and eventually drew inquiries from the BBC and the Discovery Channel, might have a little life left. ‘If it’s still in decent shape this weekend, I might go back up there and turn it into an Easter bunny,’ he said.”

Last year’s ice-out was very late and frustrated a lot of fishermen, and some predict the same this year. Not so fast, says Central Minnesota guide Ross Hagemeister. “With minimal snow remaining on the lakes and higher temperatures on the horizon, Hagemeister said, ice out may only be a few days later than in an average year,” reports Chris Reinoos of the Fergus Falls Journal. “Hagemeister, a fishing guide based near Otter Tail Lake who runs Meister Guide Service LLC, said this season’s ice out will certainly not be as delayed as last year’s, the latest ice out in recent memory. … ‘I don’t think we’re too far off. I think we’re well within reach of having a normal ice out.’ … Some bigger lakes, including Otter Tail Lake, still have about 40 inches of ice on them, but other lakes are down to 25 or 30 inches, which is much quicker to thaw.

Gustavus Adolphus College has received a license to produce one of the popular TEDx conferences, reports Amanda Dyslin of the Mankato Free Press. “Technology, Engineering and Design (TED) conferences are held at various locations that combine live presenters and TED Talks, which are videos designed to spark deep conversations and connections locally. The conferences are planned and coordinated independently by the local organizations hosting the events,” Dyslin wrote. Dave Newell, assistant director for community-based service and learning at the college, said the conference is a way to showcase the work of Gustavus alumni. Speakers can talk about any area of expertise as long as they conducted two Ted Talk videos, one focusing on bullying.

Sam Cook, or “scook,” up at the Duluth News Tribune, reports that the Fond du Lac Band of Lake Superior Chippewa has declared 13 lakes open for walleye spearing. “This marks the first time the Fond du Lac Band — or any band — has formally speared walleyes on lakes in Northeastern Minnesota under treaty rights. The lakes are part of the 1854 ceded territory, where the Fond du Lac, Bois Forte and Grand Portage bands’ rights to hunt, fish and gather are guaranteed under an 1854 treaty. Those rights have been affirmed in federal court. … The Bois Forte and Grand Portage bands will not spear walleyes in the 1854 treaty area. In some recent years, the Fond du Lac Band has netted walleyes on Mille Lacs and other lakes under their rights affirmed in an 1837 treaty. … ‘Their biologists wanted to identify lakes away from Duluth and off the beaten path,’ said Don Pereira, DNR chief of fisheries. ‘They want to keep it low-key, which is good.’ The DNR did not object to any of the lakes in which the band wanted to spear, Pereira said. ‘If we felt any of those harvest levels constituted a conservation issue, we would have objected to them,’ he said.

The Forum News Service says FX has posted the first seven minutes of “Fargo,” its single-season show that premieres April 15. “The release … set the entertainment world abuzz about the 10-episode dark comedy adaptation of the 1996 Coen Brothers’ movie that put Fargo and north-central Minnesota (and our accents) on the pop culture map.” I’ve seen the clip. The exterior footage of a desolate, snow-covered wasteland could have been shot last Friday. And I’m not entirely convinced by Martin Freeman as the main character. Sure, he’s convincingly portrayed John Watson and Bilbo Baggins. But hobbits and detectives are one thing. Bemidji? Mmmm, that’s a stretch.

Up in Fargo, the Forum reports of a Ponemah man who was recently sentenced with his ninth DWI. “James Eugene Dow, 52, was sentenced to 48 months (four years) in prison, with 213 days credit for time already served. He was also fined $210, to be paid for from his prison earnings. An additional count of felony DWI, along with one misdemeanor count of driving after license cancellation, were both dismissed at sentencing.” When Dow was arrested, his blood alcohol level was .186. Dow has eight prior DWI convictions, including one felony DWI conviction from 2012.

The Duluth News Tribune says Alyssa Lommel, the University of Minnesota-Duluth student who suffered severe frostbite, is in the market for an electronic hand. Her mother, Teri Lommel, said “After doing some looking, Alyssa has decided to go with the Pro Digits product. It’s a hand that can be programmed to perform 14 different kinds of grips.”

Also in Duluth, Peter Passi writes that the “ICO station at the corner of Sixth Avenue East and East Sixth Street will be required to hire an engineering firm to assess why the large canopy shielding its fuel pumps overturned and collapsed Sunday afternoon. … Meanwhile, the station and convenience store remain temporarily closed. The collapse of the canopy damaged an SUV, but caused no serious injuries.

The Masons in Bemidji hope someone will buy their old, decrepit lodge and do something worthwhile with it, reports Zach Kayser of the Bemidji Pioneer. Water damage from leaky pipes has doomed the 90-year-old Masonic Lodge 233. The Masons have put a $125,000 price tag on the lodge. Lodge Worshipful Master Robert Saddoris “said part of the reason the lodge was asking for relatively little money in exchange for the building was in hopes that some young entrepreneur could hypothetically afford to fix it up for a new business.” The Masons are close to closing a deal to buy the former martial arts school on Washington Avenue/Highway 71 South to house themselves and the Bemidji chapter of the Order of the Eastern Star, a national Masons-affiliated group. While the new building is smaller, Saddoris hopes better visibility will help bolster the roster of 130 members. “We’re hoping that we can get new folks interested,” he said.