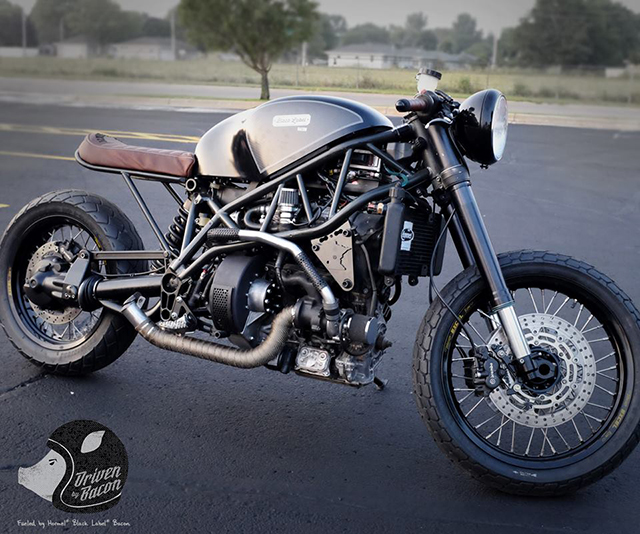 Courtesy of Hormel
This motorcycle has been retrofitted to run on bacon grease.

The headlines – and the exhaust – are the best things about this. Hormel has created a motorcycle that runs on bacon grease. Trey Mewes of the Austin Daily Herald has the details of the retrofitted 2011 Track T-800 CDI diesel motorcycle that Hormel and marketing firm BBDO Minneapolis are taking from Austin to the International Bacon Film Festival in San Diego, California. They are filming the trip to promote Hormel’s Black Label Bacon product. Under the headline “Pork torque,” the Washington Times had this quote: “The exhaust smells like bacon. So when we cruise past you, you’ll thank us,” the project organizers say, adding “If there were a bacon biodiesel tanker spill in the ocean, the fuel would be safe and mouthwatering fish food.”

Poorly placed construction signs blocked the view of oncoming traffic and caused Hannah Wilson’s death in 2012 in Eveleth, her family says. John Myers of the Duluth News Tribune reports that a court-mediated settlement stipulates that St. Louis County should give her family $100,000. Wilson, 16, of Virginia, was at the intersection of Industrial Park Drive and U.S. Highway 53 in Eveleth when she was struck broadside by an SUV. Wilson’s family said an improperly placed road construction sign blocked motorists’ view of oncoming traffic. The SUV’s driver, the county, the construction firm and the engineering firm were named in the suit. The family’s attorney said the county’s action will trigger a “confidential resolution” with other defendants that will settle the entire lawsuit.

A beef between Moorhead and the owners of a bridge spanning the Red River of the North goes before a judge today, according to Erik Burgess of the Fargo Forum. Moorhead leaders say the owners of the city’s only toll bridge are soaking drivers 75 cents at a time. The bridge owners say even though the 25-year contract between the owners, Moorhead and Fargo is up, they need more time to recoup expenses they incurred when they fixed the bridge after the river flooded. Fargo is on board with the extension, but Moorhead disputes how much the owners owe on the bridge. Mike Nelson, who is representing Moorhead, said he expects the trial to last two days.

A Duluth police officer shot a man he says was armed with a knife, reports Tom Olsen of the Duluth News Tribune. The 34-year-old man is in critical condition. Police said he was shot when he brandished a knife and refused to obey commands to drop the weapon during a domestic dispute early Monday morning. Olsen reports that this is the fifth officer-involved shooting for the Duluth Police Department in just more than four years. In the four previous incidents, prosecutors determined the officers’ actions were justified.

Underdogs Bar & Grill on State Highway 371 in Jenkins is a total loss after a fire Sunday night, reports Chelsey Perkins of the Brainerd Dispatch. Owner Bill Moen said the business closed around 10 p.m., and no one was inside when the fire started. He said the inside of the 100-year-old building is almost completely destroyed. He opened Underdogs 10 years ago in a building that has served various purposes over the century, including as a post office, church and municipal liquor store. Underdogs typically employs 10 people during the summer.

The Fargo Forum reports that a bike rider was bitten by a dog Monday afternoon. The wounded rider needs to know the dog’s vaccinations status so police are putting out an APB. Here’s the description: “The dog, possibly a pit bull or similar looking breed, was described as brown and white with a red collar.” Anyone who can identify this dog can call (701) 241-8284.

The Mankato Free Press gave some ink to the U.S. Department of Agriculture’s weekly crop report, which says Minnesota farmers are making progress on the small-grain harvest. “Minnesota’s oat harvest is 54 percent complete, the only crop ahead of average, while 17 percent of the state’s barley crop and 6 percent of its spring wheat have been harvested. The state’s corn crop is rated 70 percent in good to excellent condition, while soybeans and sugarbeets are rated 65 percent good to excellent.” So that’s pretty good then.

Speaking of grains, The Brainerd Dispatch ran a piece written by the Minnesota Department of Natural Resources on the upcoming wild rice harvest. The harvesting season runs from Aug. 15 to Sept. 30. Despite the season dates, harvesters must first ensure the rice is ripe before they knock the seeds into their canoes, the DNR says. More than 1,200 lakes and rivers in 54 counties contain wild rice, with concentrations of rice being the highest in Aitkin, Cass, Crow Wing, Itasca and St. Louis counties. Before you go out, the DNR wants you to remember these things: You can only use a non-motorized canoe 18 feet or less in length powered only by a push pole or paddles; you gather rice using two sticks, or flails, to knock seeds into the canoe and the flails can be no longer than 30 inches and must weigh less than one pound each; harvesting licenses cost $25 per season or $15 per day per person for Minnesota residents; you have to process the rice to finish it into its final food product; and the gathering process is labor-intensive. And also, it’s against the law to take any rice from waters within the original boundaries at the White Earth, Leech Lake, Nett Lake, Vermilion Lake, Grand Portage, Fond du Lac and Mille Lacs reservations unless you are Native American or a resident of one of those reservations.

Jason Mindrup, the former Brownsdale police chief, is in trouble with the law again, reports Trey Mewes down in Austin. Mindrup, 42, was arrested at the Mower County Fair for drunken behavior. He was put on a 72-hour hold because he violated pretrial conditions related to a sexual assault charge. Mindrup has been charged with sexual assault but has yet to enter a plea. Allegedly, in October 2013, “a woman accused Mindrup of sexually assaulting her in his truck after leaving a Waltham bar on Aug. 31, 2013. Mindrup allegedly denied those accusations,” Mewes wrote. Mindrup was fired in November pending the outcome of the trial. Part of his pretrial conditions was to abstain from alcohol.

The Bemidji Pioneer is keeping an eye on 2009 Bemidji High grad Courtney Gunsalus — or Courtney Guns, as she’s now known — who raised $7,000 through a Kickstarter campaign to film a music video for her song “All We Have.” Gunsalus, 23, will start filming next week with help from former BHS grad Harlan Hegna, who is now a freelance director in California. “All We Have” is featured on her CD, “Never Let the Dust Settle,” of all original songs. After they film the video and release it on YouTube, she and her band will travel to Nashville. “It’s hard to get somewhere with a music career when you live in northern Minnesota,” she said.