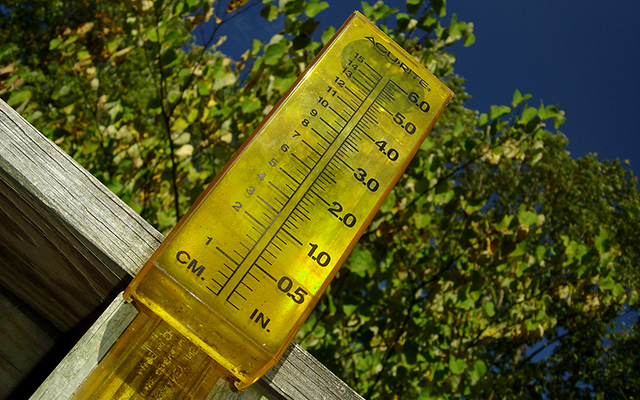 As farmers in Southwest Minnesota continue the harvest, they are uncovering soil damage from the heavy June downpours that had been hidden by the crop canopy. Julie Buntjer of the Worthington Daily Globe reports that the series of June storms that dumped as much as 20 inches of rain on area fields created huge gullies and erosion that will affect future harvests. Normally, farmers would seek financial help from the state after such a disaster, but the Legislature did not go into special session after the flooding. “We usually seem to be the forgotten area of the state. The farther you get away from the metropolitan area, there seems to be less interest,” Nobles County Soil and Water Conservation District Manager Ed Lenz told the Globe. Doug Bos, assistant director of Rock County Land Management, agreed, telling Buntjer “apparently because it’s an election year, no one wanted to have a special session.” Bos said silt washed onto lower plains, in ditches and filled waterways. “Along Beaver Creek and the Rock River, there are guys that have acres of sand across their field — it’s a mess,” he said.

Dana Melius of the St. Peter Herald put a Nicollet County-specific spin on the weekly crop report, stating that the soybean harvest was moving apace but wet conditions have the corn harvest about two weeks behind the norm. Melius reports that statewide, farmers are averaging 42 bushels of beans per acre, but in Nicolette County some are getting as many as 58 bushels per acre.

This story gets a little confusing, so stay with us. An internal investigation is under way in Freeborn County after a sheriff’s deputy who is running for sheriff reportedly got into an altercation with someone sporting some negative advertising on his lawn. The story, from Sarah Stultz of the Albert Lea Tribune, says that deputy Kurt Freitag, who is running for sheriff, was off duty on Sept. 30 when he stopped by Albert Lea resident Jim Bronson’s home to complain about a sign on Bronson’s property. The sign was one of Freitag’s that had been modified with a circle and a slash. Freitag claimed that since his campaign printed the sign, he owned it and could remove it. Freitag says that as he got hold of the sign, Bronson tried to “chest bump” him, which caused him to drop the sign. Bronson picked up the sign, took out the wire support, crumpled up the sign and tossed it on the ground to be retrieved by Freitag’s wife, Cheryl. Bronson, however, said the sign was placed on his property without his consent, and when the Freitags came to claim it, Kurt Freitag “chest butted” him and Bronson was forced to push Freitag back. Then Cheryl Freitag tackled Bronson from the side. Bronson fell on the sign and the couple wrestled with him until Kurt Freitag got hold of the sign. At this point, an officer and a detective arrived and mediated the incident, after which the Freitags left with the sign and no charges were filed.

Someone broke into the concession stand at Trojan Field in Worthington on Monday, reports the Worthington Daily Globe. Coolers and a popcorn machine were damaged, and food and drink items were destroyed.

If that weren’t bad enough, a woman was pressed for change while she was washing her clothes in an Austin laundromat, reports Jenae Hackensmith of the Austin Daily Herald. Apparently, a woman entered the Maytag Laundromat at midnight and asked a woman doing her laundry for a cigarette. Since the victim didn’t have any cigarettes, the woman asked for money. She gave her the $3 in coins she had on her person. The woman ordered her to look in her car. The victim went to her car, locked the doors and called 911. Police arrested the woman, and the victim’s $3 was returned. No word on the status of her laundry.

The St. Cloud prison, that granite behemoth south of St. Cloud on Highway 10, is turning 125. David Unze of the St. Cloud Daily Times says that the 400 people employed at the Minnesota Correctional Facility – St. Cloud consider themselves to be a family. Employees tend to work there a long time and socialize together when they are off duty. The prison has a budget of $28 million and houses about 1,000 inmates. Rich MacDonald, an economics professor at St. Cloud State University, says the 400 employees likely add another 150 to 200 other jobs in the community. The prison is the state’s intake facility, where male inmates sentenced to prison report for processing and testing to determine which facility they’ll be sent to for the remainder of their sentence.

Speaking of institutions, Kevin Allenspach of the Daily Times put together a piece on the last days of Sleepy Hollow Farms, a pumpkin patch in St. Augusta owned by Utley Kronenberg. The 76-acre parcel has been in Kronenberg’s family since 1865. Joseph settled the land, which was farmed by his son, John. Barney Kronenberg lost his arm in a corn shredder. Utley Kronenberg Sr. wanted to create seven trout ponds on the land in the late 1960s, but that idea never penciled out. Neither did his idea to parcel out the property for trailer houses. Utley Kronenberg Jr. says that of the 79 acres, about 40 are tillable, so in the early 1980s, his father decided to plant pumpkins and let people come and pick them in the fall. The idea worked and 20 years ago Utley Kronenberg Jr. bought the land from his father and has been running Sleepy Hollow Farms ever since. Now that the kids are in high school and the Kronenbergs are in their 50s, they want to have their Octobers free. Utley will likely rent the land out to someone who wants to plant corn or beans. As for his wife, Patty? “I guess I’ll be getting a job,” she told the Times.