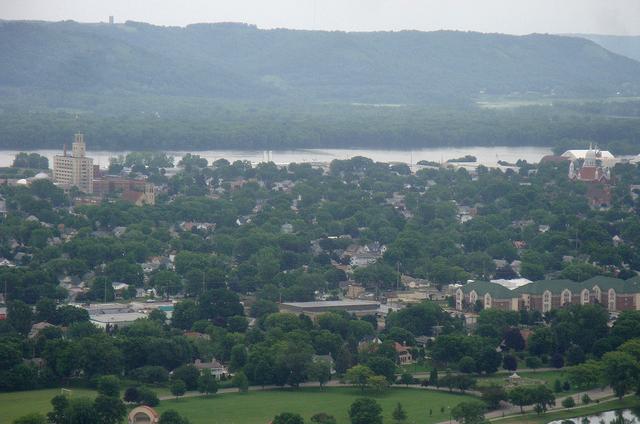 CC/Flickr/nathanm
Nearly half the parishes in the Diocese of Winona will be affected by a new organizational plan.

It’s not a new phenomenon, but dealing with it hurts just the same. The Winona Daily News reports that nearly half the parishes in the Diocese of Winona will be affected by a new organizational plan. Vision 2016 calls for 21 smaller parishes to be absorbed by larger parishes and their churches either shuttered or used sparingly. Vision 2016 addresses three issues facing the Diocese: fewer priests, shifting participation in church life, and changing demographics among Catholics. Churches, like schools, are the heart of many small communities and this is a significant blow to many towns.

Nearly 34 years after Carolyn Lee Andrew’s body was found in a shallow grave in Duluth, Tom Olson of the Duluth News Tribune reports that DNA links the 17-year-old’s killing to Cecil Wayne Oliver, who died in 1988. Cracking the case took perseverance, cooperation and 30 years of technological advances. Andrew, an aspiring model who would have graduated from Duluth East in 1981, was found face-down in a shallow ditch with a single gunshot wound to the right temple. She showed no signs of struggle and, despite massive effort and hundreds of interviews, no headway was made in the case. In 2014, DNA found at the scene was partially matched through the database of criminal offenders to Cecil Oliver’s son. His father had died of a self-inflicted gunshot wound in Chicago in 1988. A DNA sample from Oliver’s remains was a match to DNA taken from Andrew’s body in 1981. Andrew’s parents are now living in Tennessee. They thanked the agencies for providing “some answers to an unhappy chapter in our lives.”

Rock County and Luverne in Southern Minnesota will be among those communities benefiting from Gov. Mark Dayton’s initiative to expand broadband Internet access across the state, writes Julie Buntjer of the Worthington Daily Globe. The Rock County Broadband Alliance will get a $5 million grant that, along with the required $7.85 million investment from current Internet provider Alliance Communication Cooperative, will expand broadband connectivity to 1,350 homes, farms, businesses and institutions in Jasper, Beaver Creek, Hardwick and rural areas surrounding Luverne. The Border-to-Border Broadband Development Grant Program provides $19.4 million to expand Internet fiber and broadband services to unserved and underserved areas.

Central Minnesota pop star Bobby Vee’s sons are preserving their father’s legacy by archiving hundreds of hours of analog recordings to digital, reports the St. Cloud Daily Times. The tapes, cassettes and acetate disks themselves are reaching the end of their life expectancy, said Vee’s son, Tommy Velline. Bobby Vee got his break 56 years ago when a plane en route to Moorhead carrying Buddy Holly, J.P. “The Big Bopper” Richardson and Ritchie Valens crashed. Robert Velline of Fargo took the stage in Holly’s place, later recorded under the name Bobby Vee and had a career that included 38 Billboard Top 100 hits, six gold singles, and two gold albums. In 2011, Vee retired after being diagnosed with Alzheimer’s disease. Helping with the project is Al Neff, a radio show host and producer.  “It’s a fascinating story. A one-of-a-kind story of the boy-next-door getting the golden ticket and making it to the big time,” Neff said.

Mankato and North Mankato are ready to put a sales tax extension on the fast track, reports Mark Fischenich of the Mankato Free Press. The sales tax extension could generate more than $50 million. The Mankato City Council would a half-cent local option sales tax to improve parks, upgrade existing sports facilities, maintain the flood control system and build a regional transit facility. North Mankato would upgrade parks, the library and its downtown. After those projects are complete, the cities could combine their money to build a new $22 million sports and recreational facility. After legislative approval, any sale tax extension would require a local referendum. The tax would expire in 2022.

Minnesota State University-Mankato is working hard to determine the best methods of plowing and de-icing state roads, writes Dane Linehan of the Free Press. The results? Nothing definitive yet, but they’re getting close, says civil engineering professor Stephen Druschel. This study takes lab work out into the field, where researchers are collecting water runoff from plowed and de-iced bridges to determine how much de-icer sticks, and using 1,000-yard strips of parking lot at Valleyfair and Canterbury Downs to test various plow patterns and deicing effectiveness on different types of snow on different pavements at various temperatures and sun angles and under different traffic loads. They are zeroing in on temperature and traffic load as keys to deicing effectiveness, but they need to collect more data to present details to state maintenance engineers.

This story from Western Wisconsin is interesting: On Monday, the Occupational Safety and Health Administration issued a citation and nearly $1.8 million in fines for work-related hazards at Ashley Furniture’s 2 million-square-foot plant in Arcadia, Wisconsin. Mike Tighe writes in the Winona Daily News that OSHA investigators identified 14 “serious,” 12 “willful” and 12 “repeated” safety violations at the facility, which employs more than 4,500 workers, according to the citation. A serious violation occurs when death or serious physical harm can result from a hazard that an employer knew or should have known exists; a willful violation occurs “with intentional, knowing or voluntary disregard for the law’s requirement, or with plain indifference to employee safety and health.” According to OSHA investigators, the company did not take steps to protect workers from being injured by moving machine parts, did not prevent machines from unintentionally starting when employees were changing blades and failed to provide adequate safety mechanisms to prevent contact with those moving parts, Tighe wrote. OSHA also cited lack of training for workers on safety procedures. Ashley Furniture disputes the findings, saying in a statement: “The company strongly disagrees with each and every one of the agency’s assertions and believes the proposed penalties are grossly inappropriate and over-zealous. To clarify, OSHA’s announcement is not a finding of fact, but rather only an allegation.”