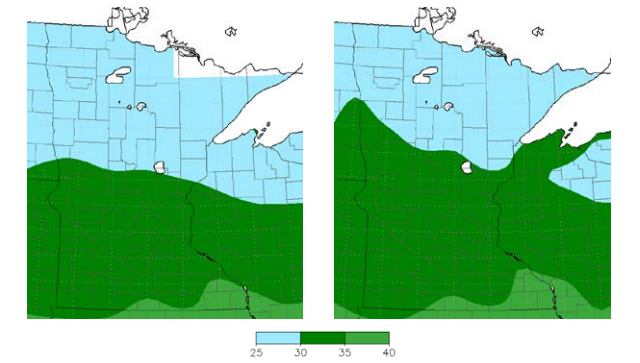 We’re doomed. Or at least climate change is going to have direct health impacts in Minnesota. That’s the glean from the Minnesota Climate and Health Profile Report 2015. [PDF] Kevin Allenspach of the St. Cloud Daily Times gets to deliver the bad news: Minnesota is getting warmer and wetter with more erratic and drastic heavy rainfall “events” (which I guess is the same as a storm).  The areas of concern: Air pollution, extreme heat, floods, drought, changes to ecosystems which will cause health problems, mental stress, more waterborne disease outbreaks, drownings, an increase in diseases caused by ticks and mosquitoes and exposure to toxins from harmful algal blooms. On the plus side: fewer reasons to relocate to Florida.

Former Brownsdale Police Chief Jason Mindrup has been sentenced to seven and a half years in prison for sexually assaulting a woman in 2013, reports the Austin Daily Herald. Mindrup was found guilty of second- and third-degree sexual assault in October 2014. Mindrup allegedly denied the accusations, but prosecutors pointed out DNA testing showed Mindrup’s saliva on the victim’s breasts. The Brownsdale City Council voted unanimously to fire Mindrup in November 2013.

Adrian Glass-Moore of the Fargo Forum reports that the defense attorneys for Thomas Carey and Brandon Smith, both 20 and hockey players for the Lincoln Stars, are expanding their initial argument. They allegedly had sex with a 15-year-old girl and now stand accused of using a minor in a sexual performance, possession of child pornography and dissemination of pornographic work, all felonies. The defense has portrayed the girl as a sexual predator who enticed the players into a sexual liaison after a game against the Fargo Force in February 2014. Now they are expanding their argument to claim that the sex tape is protected by the constitutional right to privacy and free speech. The dissemination of the video is simply an example of “sexting,” argues Carey’s attorney, Jade Rosenfeldt, and is therefore protected.

Members of the Mille Lacs Band of Ojibwe took umbrage at a planned autopsy of a spiritual leader who died in a car accident last weekend. Tom Olsen of the Duluth News Tribune reports that Mushkoob Aubid, 65, died Saturday after a car accident near Cromwell. His family said he had a heart condition and suspect that was the cause of death, not the crash itself. Medical examiners said an autopsy was mandatory and removed his body to the medical school at the University of Minnesota-Duluth. The family then said an autopsy violated their burial beliefs that require the body to remain intact. They protested Sunday at UMD for the release of the body. Sixth Judicial District Judge Robert Macaulay ordered the medical examiners to turn over Aubid’s body, which they did at about 9 a.m. Monday morning. Members of the band said they hoped it would serve as a teachable moment. “It’s our teachings, our traditions. It’s the way we were taught as a people to do,” said Lee Staples, a Mille Lacs Band elder and spiritual adviser.

Over in Cass County, the increasing number of female inmates means outsourcing their imprisonment, writes Monica Lundquist of the Brainerd Dispatch. But this is not necessarily a bad turn of events. Jail Administrator Joel Norenberg told the county board Tuesday that eight women are in its jail in Walker, another eight are at the Crow Wing County Jail and four more are at the Hubbard County Jail. Cass pays Crow Wing County $49.41 per day for boarding the inmates. It pays Hubbard County $55 per day. However, Cass County’s CFO, Larry Wolfe, said that because those jails are more efficient than the Cass County lockup in Walker, it would actually cost more per day to house them in Walker than at the other facilities. Therefore the county is saving money by farming out its inmates.

Duluth International Airport lost service to Orlando and Phoenix and flights to Detroit were reduced last year, but Candace Renalls of the News Trib reports that airport officials are pretty happy that the number of travelers using the airport dipped only 1 percent. Thomas Werner, the airport authority’s executive director, said the airport’s volume compares well to other similarly sized airports in the region. Renalls checked: The Grand Forks airport lost service to Denver and its passenger total dropped 2 percent; Rochester lost service to Phoenix but added flights to Detroit and Atlanta, and passenger totals jumped 6 percent.

A Minnesota man started “The Batman Project” several months ago to surprise children “who are a little down,” he told Maggie Stivers of the Bemidji Pioneer. The man, who prefers to remain anonymous, worked his magic Monday morning in Doris Vleck’s first-grade class at Horace May Elementary in Bemidji when he visited Kody Fischer, 6. Kody’s mother, Tanya, died and he is now being reared by his grandparents, Kathy and Dennis Fischer. “I’m here to see a very special friend, Kody,” Batman said as he entered the classroom. Kody slowly raised his hand, Stivers wrote. Batman and Kody went to a pair of chairs in the corner and the class listened as Batman read “The Lonely Pine” to Kody and the class. “I cried through the whole thing,” Kathy Fischer said. “He now has bragging rights for a very long time.” Batman then left to visit children at other schools and the Sanford Bemidji Medical Center.

Austin police warn of a phone scam making the rounds in the area, according to the Austin Daily Herald. The caller will claim to be from the IRS and tell the victims they owe money to the IRS and if they don’t pay now, they’ll face steep penalties in the future. The IRS does not make phone calls to people delinquent on their taxes, police say.