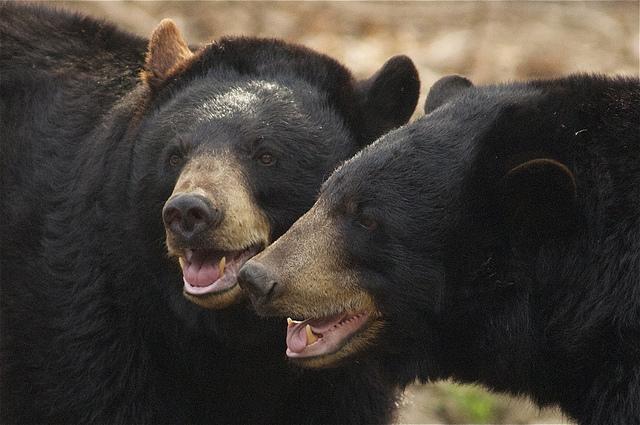 CC/Flickr/Valerie
The Minnesota Department of Natural Resources, the University of Minnesota and Medtronic are studying black bears.

Researchers from a trio of institutions are tramping around the north woods studying bears, trying not to disturb them as they awaken from hibernation. Brad Dokken of the Duluth News Tribune writes that researchers with the Minnesota Department of Natural Resources, the University of Minnesota and Medtronic are studying black bears. The DNR wants to learn about their food and habitat preferences and to see where they go during a normal year. Medtronic and the U of M want “insight into why hibernating bears can spend six months in a state of suspended animation” and yet be in reasonably good health come spring. During hibernation, a bear’s heart routinely stops for 25 to 30 seconds at a time. “The bears will breathe, have three to four heartbeats to circulate oxygen, and then the heart will stop again,” writes Dokken. “Hopefully, we can find cures to diseases and ways to treat patients that are bedridden or have cardiac conditions,” said Tim Laske, vice president of research at Medtronic and an adjunct professor at the University of Minnesota.

One hockey mom had a difficult time during the state hockey playoffs, Louie St. George of the News Tribune tells the story of how, when Luke Dow scored the tying goal during Duluth East’s 3-1 upset of Edina in the March 6 semis of the Class AA boys hockey tournament, his mother, Mary, felt a tightness in her chest. Understandable, she thought, but when the pain later intensified and she began to feel tingling in her left arm, she alerted her husband, Bob, who immediately called for EMTs — who rushed her to United Hospital. Mary is 51, fit and a health-conscious eater, yet she suffered from a heart attack. Her cholesterol, blood pressure and triglycerides were all just fine and doctors were stumped as to the cause of the heart attack until an angiogram revealed Spontaneous Coronary Artery Dissection, in which the artery wall suddenly tears and blocks the artery. It’s a rare occurrence and doctors don’t know what causes the condition. Mary is out of the hospital and back to work. Her advice: “Listen to your body.”

Here’s a guy that just didn’t get the message. Trey Mewes of the Austin Daily Herald tells the story of a suspect (whom he doesn’t name) who was busted for DUI at about 12:35 a.m. Saturday near the Burger King on Fourth Street Northwest after cops saw him run a stop sign, rapidly switch lanes and nearly hit a curb. The 48-year-old Austin man failed several field sobriety tests and was taken to the Mower County Jail. He was released at about 3:30 a.m. to a responsible party. However, at about 3:47 a.m. the same officers who arrested him earlier in the night spotted him driving southbound on Fourth Avenue Northwest. They arrested him again and this time held him at the jail until he was sober.

State turkey experts are nervous about an outbreak of H5N2 avian influenza. Camey Thibodeau of the Faribault Daily News writes that a third turkey farm – this one with 39,000 birds in Stearns County – has been infected. State Veterinarian Bill Hartmann said the farm has been quarantined and those birds that haven’t already died will be killed. The announcement of the Stearns County outbreak came one day after authorities announced an outbreak at a Lac qui Parle County farm where the virus killed 22,000 turkeys and the farm had to kill 44,000 birds in two other barns. The first outbreak was at a Pope County farm. Hartmann said there is no apparent connection between the flocks. Minnesota is one of the nation’s top turkey producers so an unchecked outbreak would be devastating. More than 40 countries have banned poultry imports from Minnesota since the virus was first detected in the state.

Here’s something you don’t read every day: Kasson-Mantorville High School senior Carley Miller won a national championship in power lifting. Guy Limbeck of the Rochester Post Bulletin reports that Miller took the 165-pound female class at the High School National Powerlifting Meet in Milwaukee. Miller posted personal bests in the squat (457.4 pounds), bench press (198.4 pounds) and dead lift (429.9 pounds) for a total of 1,085.8 pounds, which was also a personal best. The 18-year-old is 5-foot-5 and 159 pounds. This is the fourth year she has been involved in the sport. She trains between four and six hours per week. Her college plan is to attend Rochester Community and Technical College, then transfer to a school in Wisconsin, Texas or Louisiana, where power lifting is popular. She hopes to compete at the national level for a number of years, Limbeck wrote.

Someone blew up some mailboxes, which set off a grass fire that torched about 15 acres Monday south of Brainerd, according to the Brainerd Dispatch. One mailbox was blasted on Sunday, and then two more on Monday, deputies said. On Monday, a juvenile was arrested; the investigation continues. The fire nearly went into the woods and closed in on three houses and an outbuilding. “It could have been really bad,” said Capt. Kevin Tengwall of the Brainerd Fire Department.

Meanwhile, the Dispatch reports that disposable wipes are wreaking havoc on the sewer system in Wadena. The city is suffering a number of sewer backups. Dan Kovar, Wadena public works director, posted a message on the city’s Facebook page, saying “these blockages may not affect the household flushing the wipes but may be affecting a neighbor down the block, on the next street or someone clear across town.” City engineer Jeff Hulsether said although it’s sometimes difficult to nail down an exact cause of a sewer blockage, they have been able to document wipes causing blockages. “I know how easy it is to just send this stuff down the pipe,” Kovar said. “But unfortunately, just because it makes it down, doesn’t mean it’s going to not cause you a problem. If it causes someone else a problem, it’s all taxpayer money that is spent trying to resolve these problems.”

Here’s a grisly mystery: The Bemidji Pioneer reports the discovery of a man’s naked body found Monday afternoon at Sandhill River Golf Course near Fertile. The man was declared dead at the scene and taken to UND’s forensic lab for an autopsy. The man has been identified but his identity is being withheld until family have been notified.

And lastly, Meaghann “Maggie” Davis of St. Ansgar is showing her aptitude for science early. Jenae Hackensmith of the Austin Daily Herald reports that the sixth-grader wanted to know which type of music would appeal to her cat. She proceeded to the Mower County Humane Society, where she observed the reactions of 15 cats to different styles of music, including pop, rock, country and love songs. Her hypothesis was that cats would enjoy pop music the best. After three trials, her results confirmed her hypothesis. She also tested older cats to younger cats, and also observed her subjects when they were able to roam freely in a large room versus putting them in a smaller room. “I just want to explain why cats act differently around different sounds and different noises than we do,” she said. “I kind of want [people] to know that cats’ opinions matter too. … They have feelings.”