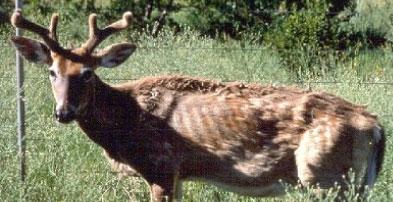 The Minnesota Board of Animal Health confirmed positive chronic wasting disease samples from a 2-year-old female white-tailed deer that died on a farm in Meeker County near Dassel. The Brainerd Dispatch cites a BAH news release that says the deer was born on a CWD-positive Crow Wing County farm and moved to the Meeker County farm in 2014 as part of a herd of 14 white-tailed deer, which remain quarantined. Paul Anderson, assistant director at the Board of Animal Health, said the key is good record-keeping. “We were able to look back at five years of recorded deer movements out of the infected Crow Wing County herd… This tracing led to the discovery in Meeker County.” CWD is a disease of deer and elk that can damage brain and nerve tissue. There is no danger to other animal species and is not known to affect humans, though eating infected meat is not advised.

In other chronic wasting disease news, the Rochester Post-Bulletin reports that a special deer hunt in southeastern Minnesota turned up a deer with CWD. The deer was an adult female taken near Preston close to four other CWD-positive deer. This tells experts that the problem is localized and thus landowner shooting permits will be allowed to lower the deer population in the area to keep the disease from spreading. DNR wildlife research manager Lou Cornicelli said none of the deer were acting abnormally, indicating that the infection is recent and will respond to aggressive action. “Had we taken a more passive approach, the CWD-positive deer would have survived another year and continued to infect healthy deer,” he said.

The Bureau of Land Management returned almost 60,000 acres to the Red Lake Band of Chippewa Indians last Friday. The Bemidji Pioneer says the land is in five northern Minnesota counties. A BLM news release said that between 1889 and 1904, the Red Lake Band “relinquished” 2.9 million acres to the U.S. — 121,000 acres of land was returned in 1999 and 2001, bringing the total amount to more than 181,000 acres.

Several Willmar-area women enjoyed their trip to Saturday’s Women’s March on Washington. Shelby Lindrud of the West Central Tribune talked to Jessica Rohloff of Willmar, who said the massive crowd was well behaved. “It was really peaceful. The most chilled out crowd I’ve ever been a part of,” she said. Retired ELCA pastor Kathy Hartley of New London attended both Friday’s inauguration and Saturday’s march. She said the attendance at the march was much larger than the inauguration. “It was a lot more low key, fewer people,” Hartley said of Friday’s event. Julie Vossen-Henslin of Willmar said there were groups and signs for immigrants, LGBTQ, women, children, Black Lives Matter, anti-racism, anti-hate, climate change and education. “Diversity was celebrated,” Vossen-Henslin said.

Despite potentially being the first non-Midwesterner to head the Ag Department in many years, former Georgia Gov. Sonny Perdue is getting support from area lawmakers. Jake Shama of the Fargo Forum reports that GOP Sens. John Thune of South Dakota and John Hoeven of North Dakota, along with Democratic Sen. Heidi Heitkamp of North Dakota, all sit on the Senate Committee on Agriculture, Nutrition and Forestry and support Perdue. Minnesota Democrat Rep. Collin Peterson, ranking member of the House Ag Committee, said he hopes he can work with Perdue and get a sense of the incoming administration’s plan for rural America.

The last shoe has dropped in the awful 2014 slaying of a Virginia man. The last person involved – 42-year-old Bartholamy Jake Drift – was sentenced Monday to 32 years in prison for taking part in the slaying Harley Joseph Jacka, 28. Tom Olsen of the Duluth News Tribune writes that Drift was asked by his girlfriend, Janessa Lynn Peters, 22, to kill Jacka, with whom she was also in a relationship, because she was having a difficult time breaking up with the victim. Peters said she lured Jacka to the apartment in Virginia on April 29, 2014. An autopsy found Jacka had been stabbed 15 times in the head, face, neck and chest. Drift admitted to stabbing Jacka, as did Anthony James Isham, 45. His cousin, John Edward Isham, 40, admitted to aiding an offender. In addition to Drift’s 32-year sentence, Peters was sentenced to nearly 29 years in prison after pleading guilty to intentional second-degree murder and Anthony Isham pleaded guilty to the same charge and was sentenced to approximately 30 years in prison. John Isham received a 6½-year sentence.

The apparent homicide of a Little Falls man in December remains a mystery. The Associated Press reports that things were going well for Terry Brisk, 41, his wife and four children. After he and his wife, Pam, dropped off a deer at Thielen’s Meat Market in Pierz for processing, he went on a solo hunt on his parent’s land. Deputies found Brisk dead later in the day. Morrison County Sheriff Shawn Larsen said Brisk died from blood loss resulting from a gunshot wound. He noted it was “definitely a homicide.” Police are still searching for the missing gun, a suspect and a motive. The sheriff said nothing negative has surfaced about Brisk. “He was a good guy who loved to hunt,” Larsen said.

A donor has pledged $1.5 million to Augsburg College’s Rochester location. Taylor Nachtigal of the Post-Bulletin reports that Augsburg has had a Rochester-area campus for about 20 years and is working to build its profile. The Minneapolis donor’s money will be used for new technology, courses and programs, said Jim Gross, the college’s associate provost for academic innovation and strategic initiatives. The college’s Rochester location focus on business, nursing and education.

MACCRAY School District — so named because it has elementary schools in Maynard and Raymond and a upper-level school in Clara City — is putting a project in front of voters to close the schools in Maynard and Raymond and create a one-school district. Tom Cherveny of the West Central Tribune reports that the school board just had the first of three public meetings on the proposal. Voters will decide on Feb. 7 whether to build a $27.8 million elementary school and $5.1 million, 500-seat auditorium on the high school campus in Clara City as well as spend $1.8 million to raze the schools in Raymond and Maynard. A 2016 report estimated costs of $8.7 million and $6.7 million to get the two elementary schools up to code. Board chairman Lane Schwitters also outlined the savings of having one campus, including consolidating staff and reduced transportation.