How did a kid from Crookston, Minnesota — a farm town and regional hub in the northwest corner of the state — end up becoming an authority on one of our country’s most intense and searing moments of racial hatred?

May 31, 1921. In a period of less than 24 hours, white citizens burned much of Greenwood — Tulsa’s vibrant Black community — and murdered as many as 300 people.

For Crookston native Tim Madigan, the journey began in the year 2000. He was writing feature stories for the Fort-Worth Star Telegram when his editor asked him to write a story on “the Tulsa Race Massacre of 1921.”

“There had been national publicity going back to the 75th anniversary [1996], because that was the year that the Tulsa Race Riot Commission was formed by the Oklahoma state legislature,” Madigan told me. “And when it was formed there was an initial spate of stories. But what got it stirred it up again was that the commission had made known their intention to look for mass graves. And so that generated a lot of international publicity, and that’s when my editor came by my desk and said, ‘Have you heard about this?’”

Madigan hadn’t heard about it, but soon would. He traveled to Tulsa to write a piece for the paper, work that would eventually lead to his 2001 book “The Burning: The Tulsa Race Massacre of 1921.” It’s the bestselling title on the subject, was recently released in a version for young readers, and served as the source material for the opening sequence of HBO’s “Watchmen” series.

In the forward to the book, Madigan called himself an “unlikely candidate” to write this particular story. He treasures his upbringing in Crookston, which he describes as an idyllic and close-knit community that raised its kids to be good and decent, with the ability to have compassion for other people. But it did not expose him to race. Growing up in Crookston, the only people other than whites Madigan saw were either on TV, or were Hispanic migrant workers out in the sugar beet fields.

“The difference between the Swedes and the Norwegians, between the Catholics and the Lutherans — those were the only differences, the fissures, in that society,” Madigan noted.

Moving to urban Texas expanded his exposure to a wider variety of people, but even so, “It didn’t take up any space in my heart or head at all,” Madigan confessed. But if digging up the past is a form of archaeology, the Tulsa assignment forced him to do some personal digging.

“I realized I had been oblivious — maybe even willfully oblivious — to the whole question of race in the nation. I knew that there were people who were different than me living out there, but I really wasn’t at all curious about what their story was, or what their experience had been in America,” Madigan told me. He was oblivious, perhaps, but not entirely ignorant.

“I knew about Brown v. Board of Education, Martin Luther King, Selma, the Civil Rights movement, Rosa Parks — what are considered the watershed moments of African American history. I knew about all those things. Even oblivious guys like me would. But from the day that I read that 300 Black people in this prosperous American community had been destroyed by a white mob, it just seemed to me that that deserved a place in the upper echelon of history, and the fact that I had no clue that it had happened struck me as being remarkable.”

This year, Madigan returned to Tulsa to write “Remembering Tulsa: American Terror” for the April edition of The Smithsonian Magazine.

“When I first came to this story 20 years ago, a lot of the survivors were still alive, and I had the opportunity to interview them and get to know them. That was an amazing experience. Now of course, they’re all gone, and I am talking with their children, or in some cases, grandchildren or great-grandchildren.”

The trial of Derrick Chauvin and the resurfacing of the initial statement from Minneapolis police (describing a male suspect who appeared to be “suffering medical distress,” who resisted officers and was placed in handcuffs, and who then died a short time later at Hennepin County Medical Center), left many feeling that without the cellphone coverage from the scene, George Floyd’s murder would have remained hidden. That’s just one life. How does a massacre of perhaps 300 people and the torching of a neighborhood, an event witnessed by thousands, get hidden?

In the usual ways: fear and shame.

“In the white community, it was shame, and the fear they might be prosecuted for what happened, even decades later,” Madigan recounted. And when it comes to burying the truth, those in power have the biggest shovels.

“When the national media descended on Tulsa in 1921, in the immediate aftermath of what happened, it was very clear who was to blame, it was very clear what an atrocity it was, and it was written that way. And at the time, the powers that be in Tulsa were very contrite. But as soon as the media was gone, and the spotlight extinguished, they took a very different turn. And they also realized early on that what had happened was going to be an everlasting stain on their community, and their dreams for Tulsa and whatever they wanted it to be. So they quickly determined that it was in their best interest not to say anything, and with controlling the media and the newspapers, it was much easier to do that than it would have been today.”

For the Black survivors, fear led to silence. “The survivors rarely talked about it. A survivor would talk with another survivor if they really knew that person well, but otherwise the fear factor caused them to keep their mouth shut.”

In interviews for his Smithsonian piece, children and grandchildren of survivors told Madigan it was like growing up in the household of a Holocaust survivor. “They knew that something dark and painful lived in their house but they had no idea what it was, because no one was talking about it.”

But the silence wasn’t strictly out of fear. There was also a much loftier reason. 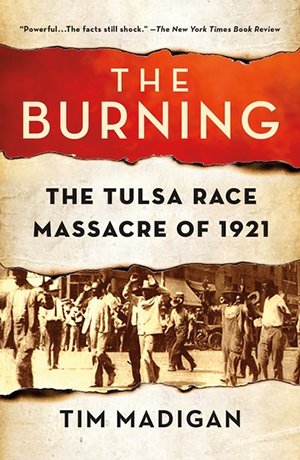 “A lot of these survivors didn’t talk about it with their children or grandchildren because they didn’t want them to hate,” Madigan told me. “What had happened was so terrible, and so other-worldly, and would inspire so much anger and so much hatred, that they just didn’t want to pass that down to future generations.”

Some of the ghosts of Tulsa 1921 still linger, including the loss of intergenerational wealth. In today’s dollars, the looting and arson prevented $200 million from being handed down.

Madigan describes two formative experiences in his life: this Tulsa-fueled epiphany on race, and his friendship with Fred Rogers – yes, Mr. Rogers. An assignment to do a story on Rogers led to a close, long-term relationship, which Madigan later chronicled in his book “I’m Proud of You.”

More than a friend, Rogers became a spiritual mentor to Madigan. At a time when Madigan was struggling to reconcile his love and admiration for his stoic Cold War-era father, Rogers encouraged Madigan to dig into his father’s personal story.

“When I learned my father’s history, and the deprivation and difficulties he grew up with, it fundamentally changed how I looked at him,” Madigan explained. “I stopped seeing him as a god-like figure of my youth, and started seeing him as just another suffering human being doing the best he could.”

How did Mr. Rogers and father issues bring racial reconciliation to a man raised by a loving small-town community — one that provided him with an idyllic childhood and a blistering slap shot, but did not expose him to other races?

“By learning my father’s story, his humanity was revealed to me,” Madigan explained. “And it just occurred to me in the last few months that the same thing happened to me when I learned the story of race in the United States. I don’t know exactly how or why that happened, but it did. And the capacity for compassion grew, the capacity for curiosity grew.”

“One of my favorite sayings of Fred’s is, ‘It’s much easier to love someone when you know their story.’ I think that’s what happened to me. I was a decent person. And that kind of dynamic played out when I realized that all of these people who I now lived and worked with had this very difficult and very different experience in the United States than I did.”

“That’s why I think it is so important for people with good will and good hearts to learn the history, because I’m finding when they do, especially in the last year when this has become more prominent in our thoughts, many times they have the same experience that I did. They understand other people better. They understand this moment of history we’re in at a much deeper level, and they’re much more inspired to become part of whatever solution there might be.”

As the 100th anniversary of this very dark day approaches, Madigan continues to recite the details and lessons of what is now a century-old story whose racist themes, unfortunately, still appear regularly in today’s headlines.

“It’s kind of strange how I ended up in the middle of this. … It’s not about white shame, it’s not about guilt, it’s not about saying America is a bad place; it’s just seeing the country in a different light, and basically learning the story. Which is not easy, because it is painful and ugly in so many respects. Try to understand what happened after the Civil War, and then maybe your heart is changed, maybe it’s not. Just learn the story. And my life is an example of that.”