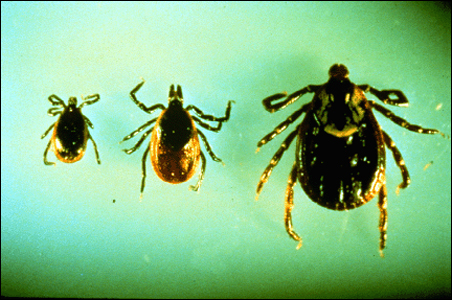 Courtesy of the Minnesota Department of Health

The cold and flu season is behind us. The tick and mosquito season has arrived. Prepare thyself.

Which of these illnesses can you get from a tick bite in Minnesota?
a) Lyme disease
b) Anaplasmosis
c) Rockin’ pneumonia and the boogie woogie flu
d) Babesiosis
e) Halitosis

Answer: A, B, D. Lyme disease is by far the most common tick-borne illness in the land of the loon, with a record 1,200 cases reported in 2007. Anaplasmosis runs a distant second, and though its flu-like symptoms are typically quite mild in younger folks, elderly patients infected with anaplasmosis can sometimes become gravely ill. Babesiosis is our local version of malaria: both organisms replicate inside human red blood cells. All three of these infections are very treatable.

Which of these ticks are commonly found in Minnesota?
a) Tuna casserole tick
b) Deer tick
c) Dog/Wood tick
d) Fiffer-feffer-feff tick

Though the wood tick is more widely dispersed than the deer tick, fortunately the wood tick transmits no diseases; except, depending on the emotional makeup of its victim, the heebie-jeebies. In other areas of the country, the wood tick transmits Rocky Mountain Spotted Fever. If you want to show off to your outdoorsy friends, you’ll refer to the deer tick by its new name: the blacklegged tick. Apparently the deer lobby was up in hooves about all the negative associations between the name “deer tick” and Lyme disease, and finally got it changed.

Answer: A and C. First, the Lyme belt is more an over-the-shoulder sash than a belt, starting near Leech Lake, angling southeast to the St. Croix River and western Wisconsin, then following the St. Croix and Mississippi rivers south. Second, notice how the Lyme Sash includes five of the state’s more popular casinos: Northern Lights at Leech Lake, Grand Casino Mille Lacs, Grand Casino Hinckley, St. Croix Casino in Turtle Lake, and Treasure Island near Red Wing. Does the deer tick have a gambling problem? Could be.

Perhaps there’s a better explanation. The Lyme Sash is also defined by host and habitat: It’s an area where the white-footed mouse is plentiful and serves as willing Lyme host, and where the broadleaf forest and underbrush provide the shade and ground litter that keep the deer tick moist (pine forests and pine needles don’t do this so well). The wood tick is prevalent in the grassier, less wooded areas of our state because they can handle the heat; the deer tick dries up faster than angel food cake.

Answer: B. That’s right — you may need your cheaters to see this one. As a wood tick the size of an iPod slithers up your calf, the tiny deer tick goes to work in its shadow. Think an adult deer tick is hard to see? The young deer tick, termed a nymph, is about 1 millimeter in length, the size of a speck of dirt or a tiny freckle. 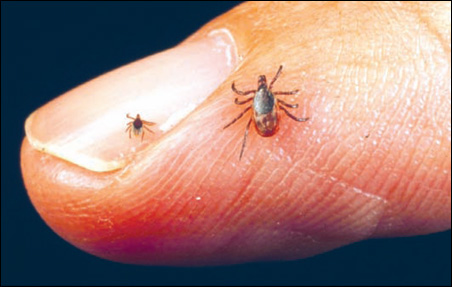 The nymphs’ diminutive size is why the majority of those who come down with Lyme disease do not recall a tick bite. It’s why the peak of Lyme season — mid-May to mid-July — correlates with the early season feeding patterns of the nymph.

You find a deer tick firmly embedded in your thigh. How long does a tick need to be attached to infect a person with Lyme?
a) A New York Mills minute
b) 30 minutes
c) 12 hours
d) More than 24 hours

Answer: Thankfully, the answer is D. While a tick can take as little as 15 minutes to get its drill bit — the hypostome — anchored into your skin, it takes a lot longer to get the whole blood-sucking operation up and running. Plus, the bacteria that cause Lyme (Borrelia burgdorferi) have to go through a graduation phase (mortar boards, diplomas, dry speeches) before they leave the tick’s stomach to become full-fledged parasites. But don’t dilly-dally about removing a deer tick: Anaplasmosis and babesiosis can be transmitted in 12 hours.

So it’s been three days since you canoed through the Lyme Sash, and that adult deer tick on your thigh looks a little plump. What are the chances that it actually carries the Lyme bacteria?
a) 30-50 percent
b) Not good: You’d be better off playing the nickel slots.
c) You can’t get to a doctor fast enough — they all carry it!
d) 75 percent

Answer:  A, but it’s kind of a trick question. Although an estimated 30 percent to 50 percent of adult deer ticks carry the Lyme bacteria, practically speaking, only a small percentage of Lyme disease is transmitted via the adult tick. It’s the stealthy, tiny nymphs that go undetected and transmit the majority of cases of Lyme disease. This, despite the fact that only 10 percent to percent of these nymphs carry the Lyme bacteria. Feeling better about the odds? Not really.

The most common symptom of Lyme disease is:
a) flu symptoms
b) nausea when watching non-issue-oriented election coverage
c) the freakin’ creeps
d) rash
e) sore joints and muscles

Answer: It’s not “B” because most everyone gets nauseated watching non-issue-oriented election coverage. The answer is D, rash. About 70 percent of those who contract Lyme disease discover a painless circular red rash with central clearing termed “erythema migrans.” The red area is actually the Lyme bacteria replicating their way across the skin before they dive into the bloodstream and disappear. Flu symptoms and sore joints and muscles are also common, so remember this rule of thumb: Rash or no rash, if you come down with what feels like the flu — fevers, body aches — and it’s not the flu season (i.e. winter), and you’ve been in the Lyme Sash, think Lyme disease. Find yourself a doctor.

Answer: B. Topical antibiotic creams (such as those used on a cut) won’t do anything to kill off the Lyme bacteria. Fortunately, the bacteria remain very sensitive to some well-tolerated antibiotic regimens, and the illness in its early stages is quite easily cured.

What’s the best way to remove a tick?
a) under general anesthesia
b) nail polish — the fumes turns their tiny brains to squash
c) with your teeth — incisors, not molars
d) tweezers

Answer: D. This isn’t hard if you think about it. Squeezing the body of the tick is like giving her (only female ticks require blood meals) the Heimlich: and the result is that she could potentially barf a stomach full of Lyme bacteria back into your skin. Aesthetics aside, is this what you want? Use the tweezers to grab the tick by the schnoz and pull.

According to David Neitzel, a vector-borne disease epidemiologist at the Minnesota Department of Health, people’s fears about correctly extracting a tick sometimes put them at higher risk of getting sick. “We’ve had cases where a person found an attached deer tick up at the cabin Saturday, but they left it there for a couple days until they could get home and have their doctor take it off,” Neitzel told me. “They treat the tick like a bomb: ‘Snip the red wire; no, the blue wire!’ ”

Relax, it’s not a bomb, and it won’t “bite” you. Tweezers, fingernails, duct tape — just get the thing out of there.

Summer is here. It could be short. Get out there and enjoy it.