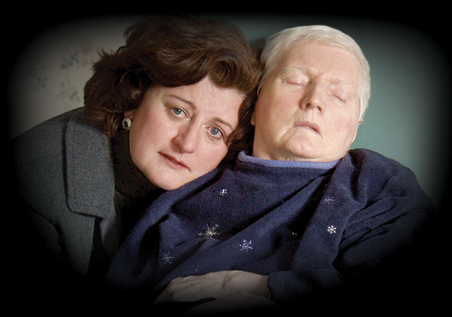 Courtesy of TPT
A promotional photo from TPT’s “The Forgetting,” which airs at 8 p.m. Sunday.

Everyone knows what Alzheimer’s disease is, though the name gives nothing away. Dementia. Mind melt.

It’s no wonder that the term is so familiar, seeing as how 8 percent of the U.S. population older than 65 has it. Overall, up to 3 million Americans suffer from Alzheimer’s, and with the baby boomers headed for retirement during the next 10 years, there’ll be a lot more “senior moments” in the next few decades. Some of them will pass innocently, an irretrievable thought, and some will be the first steps into what author David Shenk termed “The Forgetting.”

In 2004, Twin Cities Public Television used Shenk’s book to produce a documentary titled “The Forgetting: A Portrait of Alzheimer’s.” The program won an Emmy, and with 420,000 new cases of Alzheimer’s disease being diagnosed each year, the film is, sadly, more pertinent to more people than it was when it originally aired. You can see a preview here.

TPT will be re-televising the program this Sunday (Aug. 3), with an additional 30-minute segment hosted by David Hyde Pierce, better known as TV Frasier’s persnickety brother Niles. As a spokesman for the Alzheimer’s Association and having lost his father and a grandfather to the disease, Pierce joins two of the researchers from the original documentary and two other specialists to discuss what has transpired in the research and treatment of Alzheimer’s since the program originally aired.

What has transpired is, at least on the clinical, patient side of things, disappointingly little. Dr. Richard Golden works at the Noran Clinic, one of the Twin Cities largest neurology groups, and specializes in neurodegenerative diseases like Alzheimer’s. He is also a board member of the Alzheimer’s Association. I spoke to him earlier this week while he was attending the International Conference on Alzheimer’s Disease in Chicago.

Golden said the paucity of recent clinical advances in the treatment of Alzheimer’s was one of the topics that came up in conversation at the conference. (I interviewed Golden before news broke about a new drug called Rember showing promise in treating Alzheimer’s.) “For a while it was a very hot time. There were things coming out every year or two and people were very excited,” he continued. “In terms of basic science I think it is an exciting time — people are figuring out the nuts and bolts of the disease process; but in terms of treatment, which is what most people want to know about, this is a very, very dry time.”

Timetable too long for some families
On several occasions in the TPT documentary, a geneticist with a focus on Alzheimer’s tells family members that he believes there will be some exciting changes coming in five to 10 years. Later, a courteous but understandably frustrated family member asked the researcher how many more “five-to-10 years” he thought it was going to take. I asked Dr. Golden the same question.

“The first thing that comes to my mind is, I’m still OK with five more years. The way that things are being sorted out, I think they are going to have some options that we don’t have right now that will be useful,” Golden told me. “I don’t think we’re ever going to cure this disease, frankly. But I think we’re going to treat it much like we do diabetes: You use a few drugs and you have a lifestyle that is perhaps a little bit better; you figure out what the predisposing factors are, including the genetics, and you deal with those. I think we’re going to have much more in five years.”

So Golden is hopeful for the immediate future, but he sees progress as coming piece by piece. “It would be lovely if one of these immunization or antibody techniques works [a vaccine recently failed in early trials], because that would obviously be a great leap forward — that’s the home run. But I think you’re going to get some singles and doubles along the way that will make a difference too.”

The baby-boomer senility surge
If there is a lamenting edge to Golden’s comments, I suspect it’s because he worries that current advances aren’t keeping pace with the staggering nature of what is coming: the aging of the baby boomers, and the obligatory ballooning numbers of those living with Alzheimer’s. It’s definitely an age-related disease.

“The numbers will be huge,” Golden told me, moving on to paraphrase a speaker he had heard earlier in the day. “Let’s say there was a new threat that said that in the U.S., 3,000 people [the number killed in 9/11] every year were going to be decimated by some threat, some invasion, and we knew that that was coming. [Because of 9/11] we’ve got the airports all locked down; we have all sorts of new things happening on a day-to-day basis, that are, according to Homeland Security, necessary. Well that’s nothing compared to what we’d do if we understood that this Alzheimer’s surge was coming. But we haven’t done it yet. There just isn’t the sense of immediacy that we need, like we had with the polio epidemics.” 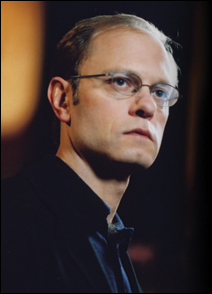 Courtesy of TPT
David Hyde Pierce, host of “The Forgetting.”

It’s true: As baby boomers age there will be more of everything — heart disease, cancer, diabetes, etc. — but what makes Alzheimer’s disease different and so expensive is the fact that it is very labor-intensive. Most of us equate Alzheimer’s with its milder, public persona: someone’s grandma who’s a little forgetful, repeats herself a lot; someone who doesn’t know all the details and who doesn’t particularly care. This is what we call in the biz, “pleasantly demented,” though it may not be a pleasant experience for spouses or caregivers.

But in more advanced dementia, the people you don’t see out in public, behavioral problems become much more common. Patients with severe Alzheimer’s can become impulsive, angry, and emotionally labile. Their impulsivity and lack of judgment put them at a very high risk of falling. I can assure you that there is no routine hospital admission for a demented patient, even if the presenting problem — a bladder infection, or a little heart failure — is easily treatable. The chronic features of dementia are aggravated by the acute changes of a hospital: new faces, new smells, new voices, a new room.

Because the demented brain is difficult to soothe or comfort or re-orient with simple conversation, sedative drugs or physical restraints are sometimes all that are left to protect the patient from himself or herself. These patients don’t just need nursing care; they need a baby sitter, a constant presence. The staffing issues will be enormous.

“People are starting to get the idea that there’s something we need to do,” Golden told me, but suggested that it may take a national crisis to capture the public’s attention.

When does forgetting become ‘The Forgetting’?
Everyone can accept that the human brain doesn’t sharpen with advancing age, but I asked Golden what’s normal forgetting, such as a where-did-I-put-the-car-keys moment, and what’s abnormal?

“The big difference always comes up to be, can you ultimately do it [recall where you put them]?” Golden said. “Does it come to you 10, 15, 20 minutes later, or is it something that doesn’t come to you at all? Someone once said, ‘The elevator always ought to go to the top’; it could go very slowly to get there, but it should always get there. And it’s when it doesn’t get there at all that it’s a problem, or when it really starts to interfere with your everyday life.”

It’s similar to depression. Everyone gets the blues, and that’s normal. But we worry that the blues have become depression when the wheels of normal life start to wiggle. For family members worried about the forgetfulness of loved ones, this may be the key to triggering a medical evaluation for early dementia: Is the forgetfulness more intermittent and pesky, or is it coming more frequently and significantly altering their lives?

‘The long goodbye — the longest’
As a United Negro College Fund advertisement used to say, “A Mind is Terrible Thing To Waste,” and that’s what makes Alzheimer’s disease such a terrible disease. It’s the person you have known and loved for all those years, leaving right in front of you. It’s a slow — painfully slow — parting, what a family member on the TPT documentary called “The long goodbye. The longest.”

It isn’t Comedy Central, but “The Forgetting with David Hyde Pierce” is public television at its best: important, informative, bracing. Watch it this Sunday at 8 p.m.