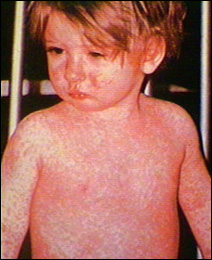 CDC/Barbara Rice
A child with the measles rash.

On Wednesday, the Minnesota Department of Health reported that a 10-month-old child in Hennepin County had been diagnosed with measles. Yes, the measles.

According to the Health Department, the child was first evaluated in an emergency room on July 29, presumably with the typical symptoms that develop a week after exposure to the measles virus: fever, bad cough, runny nose, red eyes. The classic measles rash begins at the hairline two to three days later and is densest around the shoulders.

The child was seen again on Aug. 2 and Aug. 3, each time in a different clinic. One can see the pattern: The child wasn’t getting any better, and the parents were searching for answers.

If you thought that measles had been eradicated, you might be shocked to know that there are still 20 million cases worldwide each year. Thankfully, very few of those occur here in the United States. “The CDC [Centers for Disease Control] came out in 2000 and said that measles has been eliminated from the United States,” explained Dr. Ruth Lynfield, state epidemiologist for the state Health Department, “because the 30 to 120 cases per year that we’re seeing [here in the U.S.] were directly linked to imported cases; in other words, people who had traveled or had been exposed to someone who had traveled.”

Gone but not forgotten
Only eight cases of measles have been reported in Minnesota since 2000, and over that same time frame, the average number of annual cases nationally has been 62. But recently there has been an uptick in the number of cases here in the U.S., with 64 being reported from January through April of this year. None of those was in the Land of the Loon, but four were reported in Wisconsin. The majority of infections occurred in New York City, Arizona and California, and half involved children age 4 or younger.

Not surprisingly the majority of these cases could be linked to exposure to people who had traveled overseas to disease- and poverty-ridden countries like, you guessed it — Switzerland, Israel, Belgium and Italy. These four countries accounted for all but one of the 10 people who imported the virus, the other being from India. That’s right: Modern countries like Israel and Switzerland have been experiencing measles outbreaks (1,000 and 2,250 cases respectively), and it’s because vaccination rates have fallen to the point that what we call “herd immunity” is waning. That is, a significant unvaccinated population provides enough tinder so that a spark from a country in which measles is endemic is enough to start a fire. The vaccination rate for measles in Switzerland is 78 percent, well below the 95 percent coverage we have here in Minnesota.

Like the 10-month-old sickened in Hennepin County, almost all of the national cases involved patients who were either unvaccinated or weren’t sure they had been vaccinated.

Why not get vaccinated?
To some, it has to do with what they find more threatening: the vaccine or the disease itself. A physician I was talking to recently recalled summers in the time of polio, when parents were shipping kids out of town, and the pools and lakes were empty of swimmers. The threat of paralysis — or worse — was palpable and imminent, and the vaccine was a godsend: Parents didn’t spend a lot of time worrying about possible side effects.

As Dr. Lynfield put it, “The current generation of parents of young children don’t have the same visceral respect for infectious diseases as prior generations.”

What next?
Measles is highly contagious. For the state Health Department, the questions are who gave the 10-month-old the measles, and who did the baby expose to it?

The infected infant has not traveled out of the U.S., so it’s highly likely that the source case is a traveler. Beyond that, health officials have no early leads.

Health officials in Hennepin County are working with infection control workers in each of the three facilities to go back through records and decide what other patients may have been exposed. The exposure window of concern is from the time the child arrived in the waiting room, until several hours after the child left the facility. Those exposed who are either not immunized or at higher risk of infection (those with weakened immune systems, or pregnant for example) will receive either a vaccine booster, or an infusion of antibodies against the measles virus.

Small risk of a serious illness
“The main message from my standpoint is that measles is a bad disease, and it is even a bad disease in the developed world,” Lynfield said, pointing out that 22 percent of the U.S. cases reported earlier this year ended up in the hospital, and that even with good medical care, the death rate is estimated at about one in 1,000. “There’s also an incidence of encephalitis [direct brain infection] of one in a thousand, and people can be left with very significant, severe sequelae (other conditions),” Lynfield warned.

This is no pandemic. It’s hoped the infected Hennepin County infant will recover and the number of cases will be quite limited. But it’s a good reminder of why we take our kids in to get vaccinated. It isn’t just for a sucker and a cartoon sticker, though that’s the explanation we give our kids.