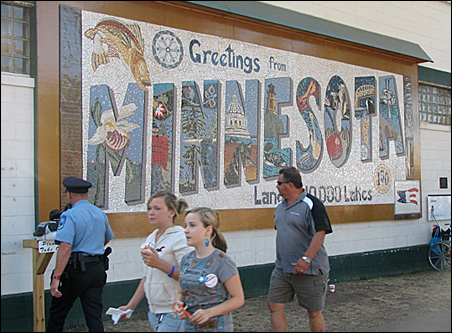 MinnPost photo by Joe Kimball
Susan Warner designed the gigantic mosaic postcard, and created it with help from children and others throughout the state.

Being good friends with Fair fanatics means they do a lot of my legwork.

This year, I arrived at the Minnesota Great Get-Together armed with details because Janet, Carol and Mark had already spent at least one 12-hour day scoping out every piece of seed art and every scarecrow in the Agriculture Building, every quilt and craft in the Creative Arts Building, and a selection of goodies in the new International Bazaar (mint lemonade!) and elsewhere (leprechaun legs!).

In previous years, I’ve tried to follow my buddies on their comprehensive tours of Fine Arts and Creative Arts – outer perimeter first, inner perimeter next, no zigzagging detours in-between.

Alas, I am not obedient when it comes to art. I go where my eyeballs take me. This year, I decided to peruse the 97th Fine Arts Exhibition on my own (more on that in a few more paragraphs). 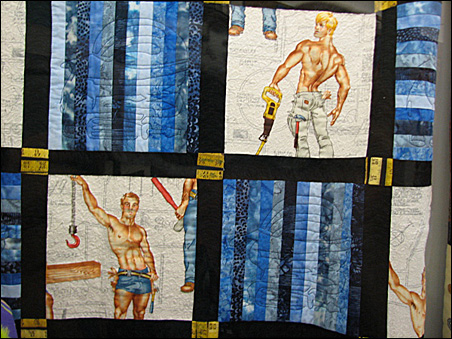 But I am especially grateful this year to my friends for spotting the tool-boy quilt (see above) tucked away in a corner of Creative Arts. Bare-chested muscular men in jeans and tool belts strike fey poses on various panels of the quilt – fit for a risqué storefront on Key West. And this piece of work is displayed in the same case as a quilt devoted to rolls of toilet paper on TP dispensers. Who is in charge of such juxtapositions? 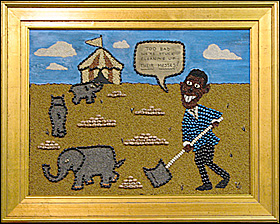 This would make sense, what with thousands of Republicans preparing to descend upon St. Paul, Minneapolis and possibly Falcon Heights, home to the State Fair and politicians in search of an arm to pump.

Let’s just say I couldn’t find any seed art and scarecrows that poke fun at donkeys or Democrats. In fact, a number of seed scenes offer commentary on messes left by elephants.

Even if some of the political artwork is Not Minnesota Nice, you can’t help but chuckle at the resistance taking root in the Ag Building. If satire isn’t your thing, there’s plenty of other apolitical work worth a gander, including the seed-art bikini. (Crop-art competition results are here. [PDF])

And who knew scarecrows could be so crafty (think of the “Wizard of Oz” refrain “if I only had a brain”).

Just beyond the seed art, I couldn’t help overhearing a concerned fairgoer seated on the stars-and-stripes bench: “Aren’t our tax dollars supporting this?” This being the adjacent “W” scarecrow, complete with a Pinocchio nose and a Norm Coleman string puppet. (Full disclosure: I know the scarecrow’s creator, Paul Wieser of St. Paul, who also cares how his tax dollars are spent but I’m pretty sure he used his own after-tax dollars to stuff W with hay and whatnot.) 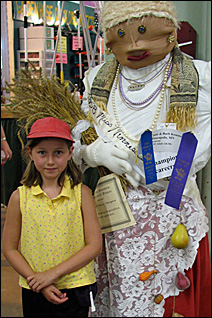 Another clever scarecrow, for completely different reasons: the 1858 Miss Minnesota Talent Contest Winner (also known as Adelaide Frances Fairgoer) by Cindy and Barb Kommers of Minneapolis. Pictured at right with her is a 9-year-old fairgoer whose name just happens to be Adelaide Frances Hayden-Sofio. How serendipitous is that?

This year’s entries and winners (PDF) do not disappoint. They capture tragedy: the I-35W bridge collapse is depicted in photographs and oils. They look at the ongoing war in Iraq – Maggie DeRee’s “Until You’ve Marched in These Boots,” for example, is a pair of military boots with headlines plastered on them. 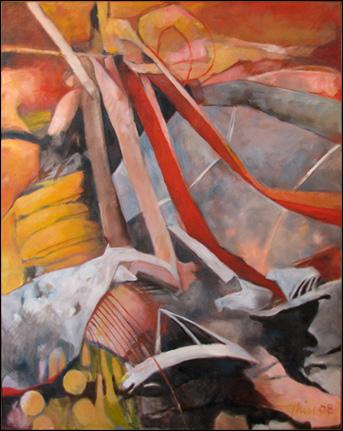 Some show a sense of humor and wonder: “Barbie Lounge,” and a sculpture of bright-pink bunny ears simply titled “Easter.”

Another attention-getter is Jonathan Ilg’s steel-and-wood frame containing tightly wadded $1 bills tucked into holes that collectively spell out “honesty.” You want to pull one of those bills out, but you don’t dare.

Like I said, I follow where the art directs my line of vision. Here are a few other pieces that grabbed my attention:

• “Remembered Contours,” dyes and pigments on cotton and silk by Kit Eastman of St. Paul. (Disclosure: I know Kit, too – our sons played together years ago. Her work is graceful and arresting, nonetheless, and this piece drew oohs and aahs.)

•  “Dad’s Liver Recession,” a sobering color print by Heather Matson of St. Paul of the impact of illness on a loved one.

I’m sure there’s plenty of outstanding art that I overlooked. But I encourage everybody to make time for the art shows at the Fair, and to check out the Education Building, where the next generation of artists shows great promise.

Outside, I was drawn to the big “Greetings from Minnesota” mosaic postcard in honor of the state’s 150th birthday. It’s on the Health Fair Building, across from the deep-fried Twinkies stand.

No Fair art tour of mine is complete without a stop at the Dairy Building to check on the progress of the butter heads, a.k.a. the artful carvings of Princess Kay of the Milky Way and her court. I usually like to do this on the last day of the Fair, when the entire court is completely carved and their smiling heads spin in the rotating booth.

But, this year I am on duty for MinnPost because of a major event that only a certain political party (the one gone to seed in the Ag Building, it turns out) would have the nerve to begin on Labor Day, in Democratic-Farmer-Laborite country.

Question for readers: So, what are your favorite pieces of art in this year’s Fair?

Considered state of the art at its opening, the Anoka State Hospital eventually fell behind ideas about mental health care