The State Fair is coming up, which makes me think of one of those Midway-style booths where, for a buck or two, a carnie with a startling degree of gum recession will guess your age or weight. If he’s right, he keeps all the money. If he’s wrong, you get a trinket worth 30 cents.

This year, ask him if he’d like to guess your telomere length. The expression on his face might be worth more than the pink lead-tainted unicorn keychain you won the year before.

As a physician, I might not fare any better than the carnie in guessing your age, and it’ll cost you more than two bucks. I can use blood work and other tests to tell you a lot about your health, but I still need you to tell me how old you are. As sophisticated as modern medicine has become, we can only tell people’s chronological age — not their true, physiological age. We can’t count the sands in the hourglass.

But that’s all changing. We now have the ability to measure telomeres, the section of DNA that caps each end of our chromosomes (the strands that carry the genetic blueprint for each cell). 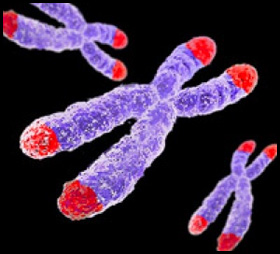 scq.ubc.ca
A telomere is the section of DNA that caps our chromosomes.

Though the DNA encoded in telomeres doesn’t carry any meaningful genetic information, telomeres serve a critical purpose. Every time a cell divides, it must make a duplicate copy of all its chromosomes, so that each cell will have a full copy of the blueprints. And every time a chromosome is replicated, a small piece of each end is sacrificed in the process.

Without telomeres, every cell division would mean that some amount of important genetic information would be clipped off and lost. The cell would, in some sense, get dumber and dumber as it divided and aged. Instead, every time a cell divides, the telomere gets whittled down a bit (your telomeres are shortening even as you read this) but the critical portion of the chromosome is preserved.

There’s a lot we still don’t understand about what regulates the lifespan of a cell, but it’s thought that this progressive shortening of telomeres may act as a cell’s biological clock. A cell divides a certain number of times, the telomeres get nibbled down to a critical length, and then the lights go out. It may be telomeres that are falling through the hourglass, not sand.

So what?
So you get older. Your cells divide. Your hair falls out. Your skin gets thin. Your joints creak. Your telomeres get shorter. So what? What’s to be done about it?

An intriguing article in the Archives of Internal Medicine suggests staying active is what there is to be done about it. Finally, we have some hard evidence to substantiate the phrase, “Move it or lose it.” The article, titled “The Association between Physical Activity in Leisure Time and Leukocyte Telomere Length,” was carried out by researchers at the Twin Research and Genetic Epidemiology Unit at King’s College, London. The authors studied 2,400 white twins, most of them women, and asked them to fill out questionnaires detailing their physical activity level during their work and leisure time over the previous 12 months. Participants also completed another questionnaire designed to assess current and retrospective physical activity in their 20s.

Researchers then drew blood samples and measured the length of telomeres on the DNA in each participant’s white blood cells. Adjusting for age, sex, smoking, obesity and socioeconomic status, the researchers found a strong positive association between the level of activity during leisure time and the length of the telomeres. In other words, “Move it, or lose telomere length.” In fact, the most active subjects had the same average telomere length as sedentary individuals up to 10 years younger.

Although telomere length and longevity have a strong genetic component, the researchers looked at 67 sets of twins who were raised together but were living discordant lifestyles in terms of physical activity, and they found similar results.

The authors didn’t try to explain why activity at work and activity at play seem to be different, but there are studies that show a negative association between perceived stress levels and telomere length (the higher the stress, the shorter the telomeres). It’s an interesting finding that may add validity to your claim, “This job is killing me.”

My hypothesis is that the benefits of exercise from performing physical labor may be offset by the physical trauma and environmental exposures often associated with manual jobs; and that while desk jobs lack the trauma and overexertion, the intense psychological stress of cubicle incarceration may lead to telomere shortening.

Spendy telomere-makeover spas
Juan Ponce de León knew nothing of telomeres when he found himself wandering around present-day Florida looking for the Fountain of Youth. But his telomeres must have been cracking and peeling like cheap paint under the snowballing psychological stress of not finding the Fountain of Youth he had promised both his aging body and his frustrated conquistador ego.

In 2006, the ghost of Ponce de León resurfaced in the body of illusionist David Copperfield, who was under the illusion that a spring on one of the four Bahamian islands he bought for $65 million had powerful rejuvenating properties.

For up to $392,000 a week, you can stay at Copperfield’s resort and get your telomeres lengthened and your bank account trimmed.

I’m going out for a jog. I may dip my toes in the waters of Hidden Falls.