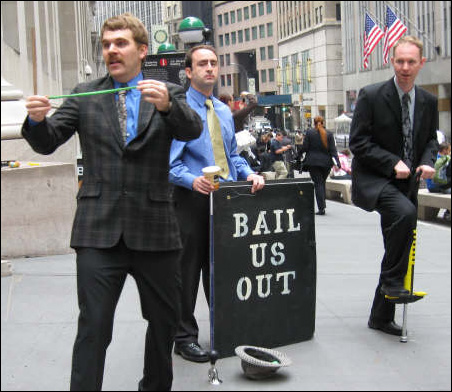 NEW YORK — Three days after the Dow dove below 8,000, three fairly fashionable fellows managed to make some money on Wall Street — by standing on it.

They stationed themselves in front of JP Morgan Chase with a big “BAIL US OUT” sign and a spiffy hat for spare change.

This corner across from the New York Stock Exchange, they pointed out, was where the money would be made on Wall Street this Columbus Day. Little did they know then that the market would roar back several hundred points by the end of Monday, or that the gains would fizzle by midweek.

As photographers and tourists clicked and grinned, one of the street performers bounced on a pogo stick and another twisted balloons into odd shapes. A third barked about their money-making plans. My inner cynic couldn’t help but compare the bouncy-bounce of the pogo stick to the stock market of late or the squeaky manipulation of balloons and air to toxic mortgage securities.

Are you stockbrokers, a tourist asked. “No. We’re unemployed.”

Did you work at Lehman Brothers? “No. We’re unemployed.”

See, these guys seemed too well-dressed to be just street performers.

At times, the hat sat on the sidewalk. At others, it was held out for dollars and loose change. I took the opportunity to lighten my purse of a fistful of coins. After all, I hadn’t come to Our Nation’s Financial District expecting to laugh out loud. (Truth be told, I was on vacation but decided that MinnPost needed some stock photos for our ongoing coverage of The Financial Meltdown.)

This website has some historical photos that are superior to mine.

By golly, the panhandling was amusing. On Wall Street. Of all places.

‘Morons’
Of course, the security guards protecting the NYSE weren’t as amused. I stopped by to ask why so many TV vans and satellite towers were parked on the street. Surely, they’re not here for the street performers? “Morons,” one of the guards muttered while nodding in their direction. The guards have seen a lot more media on the street in recent weeks (looking for news and photo ops), but the “bail us out” buskers appeared for the first time Monday.

Another pressing question: “Where’s the bull?” I was advised to take a right on Beaver, down the way. Seriously.

In December 1989, sculptor Arturo Di Modica parked his 7,000-pound bronze sculpture called “The Charging Bull” in front of the NYSE, an early Christmas gift — homage, if you will, to a longtime symbol of a roaring, soaring market. The arrival of this behemoth did not go over well, so the bull was moved to Bowling Green a few blocks away. 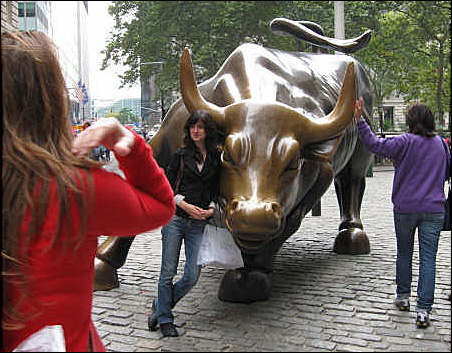 The bull wasn’t getting a lot of respect this week. Some bold visitors actually patted the beast’s anatomically correct private parts as cameras clicked away. Others shimmied up its head to have their photos taken between the horns. They slipped off fairly quickly. Try as we might, there’s no taking this bull by the horns.