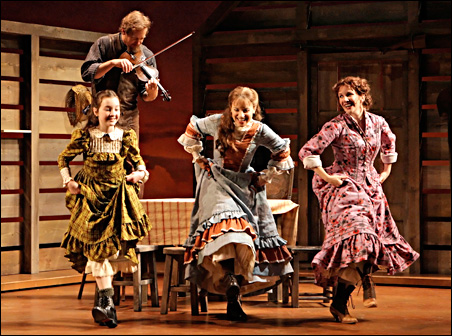 Though local critics panned last year’s “Little House on the Prairie” musical, they did not deter an extended run at the Guthrie or dissuade the Ordway from booking the first stop on a tour starting in the fall.

As Ordway President and CEO Patricia Mitchell told me this week: “I think it is such a beloved story, and although I know the local reviews were not very good, the review of the public was excellent — which is not nothing.”

In fact, the premiere of the musical was the Guthrie Theater’s top-selling show in 2008, says Melodie Bahan, the Guthrie’s director of communications. The show initially was booked for six weeks, then extended to 2 ½ months; Bahan thinks the Guthrie could have easily filled seats for another four weeks. But the Minneapolis-based theater had to move on to other productions planned in the McGuire proscenium theater.

Nowhere better to tell the story
“There were certainly the naysayers,” Bahan says about the reviews. (Here’s one from the Star Tribune.) “Certainly, Joe’s (artistic director Joe Dowling) intention in being part of the partnership with ‘Little House on the Prairie’ (creators and producers) is that there was nowhere else better to tell the story. It’s Minnesota. We are the prairie. This is our audience. It allows us to bring in generations of audiences — mothers, daughters and grandparents.”

In case anyone doesn’t know the history, “Little House on the Prairie” is the title of the book series that Laura Ingalls Wilder started writing in the 1930s about her family’s experiences on the frontier in the 1870s and 1880s (including living in Walnut Grove, Minn., and Pepin, Wis.).

Bias alert: I ripped one of her books in a high-school English report, but I was such a book snob back then. Bias alert II: I admit to watching — and liking — the popular TV show (1970s-1980s) starring Melissa Gilbert as Laura and the late Michael Landon as Pa. Bias alert III: I did not see the musical because I thought it might be hokey, and the fact that Gilbert plays Ma in the musical just reminds me of how old I am. Bias alert IV: I look at a number of reviews before I fork out my money. In this case, some were more scathing than my book report. …

But who am I to question the masses who love all things “Little House” and are looking for a multigenerational outing?

Significant changes made since Guthrie staging
Besides that track record, the musical has undergone “some really significant reworking” since its debut, Mitchell says. “There will be some new musical numbers (a “slew,” according to one press release), but I don’t want to give away the store. There’s some significant restaging” for a bigger stage than the McGuire’s.

Such revamping is common. “The process of developing a new musical is not unlike the process of developing a new opera,” says Mitchell, who once headed the opera companies in San Francisco and Los Angeles. “When you create a piece on the opera side, you don’t know until it’s on its feet what you have, and then you work on it to refine it. … It’s in the performance that you learn about it. You can only tell so much on the page.”

The Ordway has booked the musical for Oct. 13-25 in St. Paul. Stops in Denver and Toronto also are booked, according to Anne Rippey of Type A Marketing, which is handling inquiries about the production. A full itinerary of stops on the tour will be found here once promoters have announced plans in individual markets, she said.