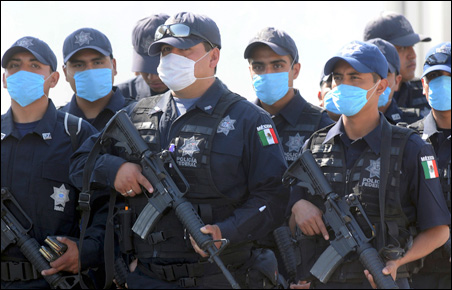 In case you were in a coma over the weekend, the Vikings drafted Florida wide receiver Percy Harvin, and an outbreak of swine flu in Mexico City has led to what U.S. officials are calling a “public health emergency” north of the border and beyond.

Both are the source of intense speculation. I’ll leave the pigskins to somebody else. Here’s what we know, and don’t know, about this swine influenza outbreak.

There’s nothing distinctive about the symptoms of swine influenza infection. As with human influenza infections, high fever, headache, severe muscle aches, fatigue and dry cough are the primary symptoms. Occasionally, more often in children, vomiting and diarrhea can develop, but it is limited; the poorly named “stomach flu” really has nothing to do with “the flu” (influenza).

While the strain isolated in Mexico appears to be new, swine influenza has been around a long time, and as the name suggests, primarily infects pigs. Over 25 percent of pigs worldwide have antibodies against this type of swine flu, and as the Centers for Disease Control and Prevention (CDC) reports, the pork industry deals with flu outbreaks routinely.

Nationwide there is usually one human swine flu case reported every 1-2 years, typically in people with close contact with pigs. Rarely, a person infected by a pig can pass the infection on to another human, but generally not beyond a chain of three individuals.

This strain is a unique combination of genes
Laboratory work confirms that this strain of swine influenza is a new kid in town, a unique combination of pig, human, and avian genes that’s never been documented. While this particular combination might be novel, the process it took to generate it is not, as pigs have historically been a key breeding ground for new influenza virus strains. If a pig becomes simultaneously infected with an avian flu virus and a human flu virus, the two strains may trade gene segments and, voilà, a new breed of pestilence is born. A small change in a virus’ genetic makeup is called “antigenic drift.” A dramatic change is referred to as “antigenic shift” and has the makings of a pandemic, depending on what capabilities the reshuffled genetic deck brings with it.

Having a novel genetic code doesn’t necessarily make a virus more virulent. In simplistic terms, a virus needs to be capable of attaching to the cells of the host’s respiratory tract, gain entrance to that cell and reproduce using the host cell’s genetic machinery, and evade the host’s immune defenses long enough to launch its progeny back out into the world.

Because different influenza strains often appear fairly similar to each other immunologically, having immunity to one strain can sometimes afford partial immunity to a different strain. Although this year’s flu vaccine includes a strain of influenza type A, subtype H1, N1, the same make and model as this new swine flu strain, the viruses are otherwise very different; so according to the CDC, this year’s vaccine is unlikely to be protective.

From infective standpoint, it’s clinically potent
Whatever unique genetic properties this new strain of swine flu has, from an infective standpoint it has shown itself to be clinically potent. With cases now being confirmed in California, Texas, New York, Ohio and Kansas, in people with no apparent direct pig contact, this particular strain appears to have the hardware to move directly from human to human, no middle pig required.

Unfortunately, the virus has also shown itself to be lethal, although we won’t know exactly how lethal until we understand how many people have actually been infected. As an example, early reports on the initial West Nile virus outbreak in New York City in 1999 included only those who were sick enough to end up in a clinic or hospital. By checking antibody levels to the virus in blood samples from the general public, it became clear that the vast majority of those infected had either very mild symptoms or none at all.

With this current strain of swine influenza, we have a numerator — over 100 deaths in Mexico, but it will take a lot more detective work to find the denominator and define the risk. Of the 20 confirmed U.S. cases, only two required hospitalization. It’s unclear why there is a discrepancy in lethality between cases in the United States and Mexico; perhaps the difference is more statistical/epidemiological than real.

According to CNN, the cases confirmed in the United States and Mexico “were enough of a concern for Andorra Vassiliou, the European Union’s health commissioner, to recommend against travel to North America. People ‘should avoid traveling to Mexico or the USA unless it is very urgent for them, Vassiliou said.” The report also noted that Dr. Richard Besser, acting director of the CDC, “said Vassiliou’s warning was ‘not warranted.’ “

Another unexplained aspect: age of patients
Another unique but unexplained aspect of this swine flu strain is the age of those most strongly afflicted — older children, young adults, whereas typical flu strains are the most dangerous to the very young and the very old. It’s all speculation at this point, but one hypothesis is that some of the deaths seen in otherwise healthy, robust adults is because their immune response to the virus is so powerful as to be counterproductive. It’s as if the fire department knocked down the whole house to put out a kitchen fire.

There is some good news in all of this. The swine virus appears to be sensitive to two anti-influenza medications, which, if given early, can curtail symptoms and infectivity. It can be prevented by all of the usual measures: good hand washing, sneeze and cough control, and  isolation of those infected. Also, we’re getting late in the flu season, so the virus will have a hard time generating a head of steam, since for unclear reasons, influenza remains a winter-season phenomenon.

If you have influenza symptoms and a travel pattern that puts you at risk, you should call your doctor and be screened. I talked with officials at the Minnesota Department of Health who said it’s still uncertain whether the standard nasal swab testing being done in clinics and emergency rooms will reliably detect this strain of swine flu (does a negative swab really put you in the clear?). The MDH believes it will work, but CDC officials are testing these various screening products, and in the meantime, all specimens are being sent to MDH for more definitive analysis.

Related: Here is a Google map plotting suspected and confirmed cases of the new swine flu.