The human stomach is a cauldron of hydrochloric acid. With a pH of less than 1, the content of the stomach is roughly 3 million times more acidic than our blood. The stomach secretes large amounts of thick mucus to protect itself from this onslaught, but the esophagus — the swallowing tube connecting the mouth to the stomach — has no such protective barrier.

Typically that isn’t a problem. A muscular valve separates the esophagus from the stomach, opening as food needs to pass, and closing off when it doesn’t. However, in some people this valve becomes leaky, allowing stomach acid and enzymes to splash up and corrode the esophagus. This is heartburn — TUMS/Rolaids country — what physicians call gastroesophageal reflux disease (GERD). Though virtually everyone gets an occasional bout of heartburn, a population-based survey found that 6 percent of Americans have heartburn or regurgitation more than twice a week.

Besides the obvious discomfort, there are two major complications of GERD: bleeding from the corroded esophagus and a permanent change in the lining of the esophagus termed Barrett’s esophagus. Damaged by the repeated acid exposure, the normal cells of the esophagus are replaced by cells that look like they belong in the small intestine, which is why Barrett’s can also be called “intestinal metaplasia.”

Fertile ground for cancerous changes
Unfortunately, the tissue changes seen in Barrett’s esophagus provide a fertile ground for esophageal cancer, an aggressive malignancy with a 15 percent five-year survival rate. Just as human papilloma virus stirs up the lining of the cervix and increases the risk of cervical cancer, the inflammation caused by acid reflux appears to cause precancerous changes referred to as dysplasia. The dysplastic cells grow abnormally; they’re not growing out of control, they’ve not become cancerous yet, but dysplasia is the next step in the progression towards cancer.

A patient with Barrett’s esophagus has a 0.9 percent risk per year of developing high-grade dysplasia, and a 0.5 percent risk per year of developing cancer. Together the risk is 1.4 percent or 1 in 72. That may seem like a small percentage, but it’s a big number if one considers that roughly 3 million Americans have Barrett’s esophagus. And it seems like a big number to Dr. Robert Ganz, a gastroenterologist with Minnesota Gastroenterology whose work has had a special focus on Barrett’s for more than a decade.

“They keep saying that’s a relatively low number, but to me, that seems to be a relatively high number,” Ganz told me. “Being married with kids, if I came home to my wife and said, ‘Honey, I have a 1 in 72 chance of getting cancer or high grade dysplasia each year,’ I think she’d want more life insurance.”

Antacid therapy doesn’t treat Barrett’s
Acid reduction is a very effective therapy for those with regular GERD symptoms, but antacids like omeprazole, Nexium, Prevacid and others do not eliminate Barrett’s or its attendant cancer risks. 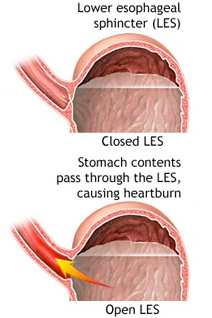 As an effort to detect pre-cancerous or cancerous changes early, regular endoscopic screening (peering into the esophagus with a fiberoptic scope) for those with Barrett’s has been the standard of care. But surveillance endoscopy has been a contentious issue, primarily because it hasn’t been shown to improve outcomes, and the approach has long frustrated Ganz with its ineptness.

“We were essentially telling patients with Barrett’s, ‘We’re going to look at you every two or three years until you get cancer, or you don’t,” Ganz said. “That’s certainly not been our approach to cervical dysplasia and cancer. It just didn’t make sense.”

Part of the problem was that there was no safe, effective treatment to eliminate developing precancerous lesions found on screening. Ten years ago Ganz was using an ablation (removal) technique called photodynamic therapy. Exasperated by the technique’s poor outcomes and high complication rate (an editorial in the NEJM quotes a 94 percent rate of treatment-related adverse events), he began to think there must be a better way.

Through a dermatologist colleague, Ganz became aware of a company using radiofrequency energy to tighten the skin and remove wrinkles. He conceived of the idea of using a balloon wrapped in tiny electrodes that could be inflated inside the esophagus and used to deliver a radiofrequency burn to precancerous areas.

But his concern was that he wouldn’t be able to precisely direct and control the energy delivery. The esophagus is just two to four millimeters thick, and the consequences of perforating it are severe — a highly mortal infection deep in the chest called mediastinitis.

“We’ve been very respectful of not ablating Barrett’s esophagus, just because of the location of the esophagus, right in there between the heart and lungs,” Ganz said. “It’s a rough neighborhood that it lives in.”

From paper to prototype
Like many innovators, the problem for Ganz was getting his idea off the paper and into a prototype.

“All of these other gastroenterologists were telling me it was impossible to do, it couldn’t be done,” Ganz recalled. (“It” being developing a device that could deliver a precise microscopically-thin burn, repeatedly, in patients of all shapes and sizes.)

“But I met with this engineer in California, and I told him, ‘We need to burn in a half a millimeter, and no deeper, every time,’ and he looked at me and said, ‘Well what’s the problem?’ And I said, ‘Well, a hundred people before you have told me it is impossible.”

Ganz laughed as he recalled the conversation. “This engineer had no experience in gastroenterology, and he didn’t know that he could fail. He said, ‘Easy, peasy. I’ll do it for you. No problem.’ Had we worked with an engineer in the field, it never would have happened.”

Today’s research article in the New England Journal of Medicine proves that Ganz’s idea is more than doable. The study randomized a group of patients with Barrett’s to either treatment with Ganz’s HALO 360 device or to a sham intervention where the Barrett’s was simply monitored. The study found that 90.5 percent of those with low-grade dysplasia had complete eradication of dysplasia with the HALO 360 device, and 81 percent of those with high-grade dysplasia (where the risk of cancerous conversion is high) had complete eradication with HALO.

The procedure was well tolerated, and the main complication was a 6 percent rate of esophageal stricture, a narrowing related to scarring.

“It sounds worse than it is, because the strictures are quite bland and easily treated,” Ganz said. “Just one dilation and they’re fixed.”

With the older photodynamic therapy, about a third of patients developed strictures, which Ganz says were much more severe.

Obviously Ganz is understandably enthusiastic about the results of the NEJM study. He set out to create a serious solution to a serious problem, and he believes that radiofrequency ablation will become the standard of care for preventing esophageal cancer.

“It’s revolutionary,” he said. “Because now, instead of having your esophagus surgically removed for high-grade dysplasia, which is still the standard of care in the United States, with all that morbidity and mortality, you can come in for a 20 minute procedure and you’re cured, with no surgery.”

Why treat just precancerous lesions?
Although the NEJM study was designed primarily to evaluate the ability of radiofrequency ablation to treat precancerous changes, secondary analysis showed that in 77.4 percent of patients, the Barrett’s esophagus was completely eliminated. The lining of the esophagus returned to normal. This is consistent with a smaller previous study that found radiofrequency ablation could completely reverse Barrett’s changes in 98 percent of patients.

This ability to eliminate the Barrett’s itself is what really makes Ganz excited. Why not eliminate the prime mover, rather than putting patients through repeated surveillance endoscopies, waiting for something, or nothing at all, to happen? The accompanying editorial suggests running a randomized control trial putting radiofrequency ablation up against surveillance, in order to see if the former is “great just for some or justified for many.”

Obviously Ganz’s view is not completely objective, but thinks he knows the answer to that question. “We believe we have a technique that is so safe, so effective, so precise, that it makes the risks of living with Barrett’s look enormous.”

Empty stomach? Want to see how radiofrequency ablation works? Watch this video of the procedure being performed.