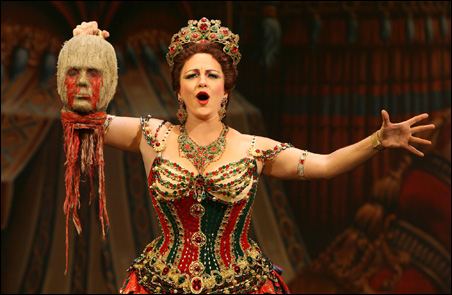 Photo by Joan Marcus
Kim Stengel has appeared as the diva Carlotta Giudicelli in “The Phantom of the Opera” 4,800 times and counting, including a stint last year on Broadway. Her dress weighs 60 pounds.

Since its debut in London in 1986 and on Broadway in 1988, “The Phantom of the Opera” musical has lured 80 million attendees and phalanxes of phans, appeared in more than 100 cities and reportedly grossed more than $5 billion worldwide. It’s now the longest-running show on Broadway, and it has racked up seven 1988 Tony awards, including best musical.

The U.S. tour begins a three-week stay Wednesday at the Orpheum Theatre in Minneapolis, the fourth time Hennepin Theatre Trust has booked the show. I will be at the Orpheum on Friday night. The “Phantom” phenomenon will not pass me by again.

I tried to get tickets to the mega-hit while visiting London in 1987 and 1988; I gave up while traveling to New York in recent years, and I figured it would be sold out in the Twin Cities during previous runs.

To prepare for my first encounter, I’ve been perusing “Phantom” phacts and the study guide. [PDF] I’ve been listening to the haunting music, and can’t get the titular song out of my head — I like it that much. Still, I’m curious why “Phantom” endures after all these years and if its pageantry will ever be passé.

The diva explains the phenomenon and phans
“I like to say that ‘Phantom’ is the ‘Star Trek’ of musical theater,” says Kim Stengel, who has portrayed the prima donna Carlotta Giudicelli more often than anyone else: 4,800 performances, including a stint on Broadway last year and tours to Asia, Canada and across the United States.

“It’s a freak-of-nature thing that happens,” Stengel says during a phone interview from Hartford, Conn., the stop before Minnesota. “I can’t identify it; otherwise someone would have been able to replicate it. … If it was easy to do, it would be done again and again. But there’s nothing quite on the scale and scope and impact that ‘Phantom’ has had.”

That scale, scope and impact are physical, mystical and musical, Stengel and others say. The original London cast recording, for example, has sold more than 25 million copies and was the first in British musical history to hit the charts at No. 1, according to press materials.

As for the physical magnitude, consider the 1,000-pound, 10-foot-high chandelier rigged to fall to the stage without breaking its more than 35,000 beads. Or the 550 pounds of dry ice used to create the misty eeriness below the Paris Opera House, where the phantom dwells. Or the 60-pound bejeweled dress Carlotta wears in one scene. Consider that it takes 20 48-foot trucks to haul it all from city to city.

“It has romance, a typical triangular relationship,” Stengel says. “It has so many human elements that are almost mythological and yet standard. … The phantom starts out as this very sympathetic figure and changes over time into being the villain, yet the audience still has a sympathetic connection. Musically, it’s very accessible and very memorable and singable.”

Just as “Star Trek” has its Trekkies, “Phantom” phans (or phanatics, perhaps?) fervently follow Carlotta and the other characters. Carlotta’s followers run an online shrine, where detailed bios and clips are kept on all who have played the tempestuous diva.

“One woman has done a clip of all the Carlottas when we do the frog croak,” says Stengel, who will appear in the May 13 to June 7 production at the Orpheum. “They literally pirated and clipped together — from all over the globe — the frog croak. The fans are pretty gregarious and supportive. It’s very flattering and it’s very humbling when you consider that it’s (the croak clip) a lot of time out of somebody’s day.” Check out Stengel’s bio and her croak here.

The music, the love story, the humanity
Hennepin Theatre Trust President and CEO Tom Hoch, who booked the tour about 15 months ago, will see “Phantom” for the fourth time, the first of which was on Broadway years ago. What makes the musical endure in his mind? 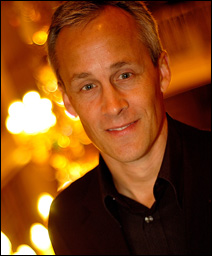 “I think it’s a variety of things. I think it’s the music. It’s become so the music of ‘Phantom’ is ubiquitous. People hear it and even if they’ve never seen the show they have an association with it,” Hoch says. “I think for those who have seen ‘Phantom,’ they fall in love with the story — whether it’s the beauty-and-the-beast aspect of it, whether it’s the power of the music, whether it’s this love story. It has a lot of elements to it that people can identify with on a lot of levels.”

The last time “Phantom” came to Minneapolis, about 80,000 people altogether attended the performances in 2004. So far this year, ticket sales are “good” despite the recession, Hoch said, adding that discounts are never needed to fill seats for “Phantom.”

But like other theater executives, he is concerned about drawing crowds in a tough economy.

At a recent Ivey Awards board meeting, he said, members of the theater community discussed current purchasing habits of their patrons. “We kind of agreed that we saw a lot of patrons going to productions that they were quite familiar with, which was saying to us that some but certainly not all purchasers don’t want to take a risk. They don’t have a lot of money to spend and so they want a more predictable experience, and that’s OK.”

“Phantom” certainly has a track record after all these years. But, gee, it’s not the cheeriest fare, I say to Hoch.

“I don’t necessarily think people want uplifting, but they want a certain sense of predictability. They know that this is a big, beautiful musical, so they have a sense of what they’re purchasing. … Their daily lives are an economic surprise, so they’re not looking to be surprised or shocked. They want something that is reassuring, and familiarity is reassuring.”

“Phantom” also has proved to be a gateway for theater newcomers and the children of early phans.

“For people who are new to theater, this is a great way to be introduced to the theater,” Hoch says. “When I’m out in the community, I ask people I meet if they go to the theater and they will say, ‘Of course, I went to ‘Phantom.’ That’s an important role for us [the Hennepin Theatre Trust] to play. In many respects, we are the front door to the rest of the theater community.”

“With any job it’s the other things that kind of interrupt your day,” she says. “You might be tired physically or singing when you’re sick. But Carlotta is fun! I have the best job. … I get to sing, throw a few tantrums and take a break. Then I come back and sing, throw a few more tantrums and take another break. She’s (Carlotta) very, very well-paced as opposed to Christine [the lead], who’s on for three hours straight.”

The first time Stengel saw “Phantom” was on Broadway, when she was in her 20s and struggling to feed herself and her cat.

“I was actually in the back row at the Majestic in New York when they were previewing ‘Phantom’ on Broadway, and I remember looking up and thinking, someone finally wrote a part (Carlotta) for me … but this show will be gone by the time I’m old enough to play her,” she recalls.

To draw attention and some cash, she stood in front of the Majestic, put her hat down to collect coins and started singing tunes from other operatic musicals. Singing something from “Phantom” would not have been apropos, she said. The stunt was so terrifying, she only did it twice. “I do remember the windows of the dressing rooms opening and people looking out.”

But her first stint as Carlotta came on a Canadian tour. Then last year, she finally got a break in the Broadway production.

“It was a dream come true. There was a huge following of fans that showed up for the opening. I felt like a rock star. It was very amazing and very encouraging.” At the same time, it was confusing. “I thought, what do I do now with myself? My whole life has been focused on getting to Broadway.”

For one, she says she has landed a part in “The Adventures of Tintin,” a trilogy which Steven Spielberg and Peter Jackson are taking turns directing. For another, she’s on her way to Minneapolis, where the audiences were “fabulous” the last time “Phantom” played in 2004.

Our conversation is coming to a close, and it’s time for one last pitch or two. “This is one of the strongest casts I’ve ever seen — it’s truly amazing,” she says. One phact she wants to pass on to potential phans: “There is always the myth that ‘Phantom’ is sold out before we get to the cities. … We always sell well, but there are plenty of tickets. Come see us.”

Will I become a phan or a phanatic? I’m ready to find out.