Callously disregarding the fact that the 2009-10 influenza season doesn’t even officially begin until Oct. 4, the novel H1 N1 influenza continues to propagate itself across the nation.

Here in Minnesota, for the week ending Sept. 26, H1N1 activity levels either equal or exceed those seen during the normal, late winter flu peaks of the previous two flu seasons. Thankfully, there have been no deaths from laboratory-confirmed influenza in the month of September.

As for its pattern of infectivity, H1N1 continues to spare the elderly and focus on the young. For the week of Sept. 20-26, 134 Minnesota schools reported flu outbreaks, defined as either absenteeism of 5 percent or more or the flu-derived absence of three or more children from the same classroom. This is twice the number of school outbreaks reported just one week prior, and it’s more than three times the peak school activity seen in the two previous flu seasons.

While schools are busy covering their collective cough, the novel H1N1 virus seems to be extending a senior discount. Although seasonal influenza traditionally saves its most lethal bite for the elderly, H1N1 seems to be avoiding seniors. Across the state there still have been no H1NI outbreaks in long-term care facilities ( nursing homes), and a Minnesota Department of Health bar graph (below) demonstrating the age distribution of H1N1 infections shows that just 5 percent of confirmed cases have involved Minnesotans over the age of 65.

The most widely accepted explanation for this relative senior-sparing effect has to do with the fact that, for all practical purposes, the H1N1 flu strain withdrew from public life around 1957. People who were born before that date were infected with various strains of H1N1 influenza, and that exposure armed them with antibodies that are similar enough to today’s novel H1N1 to provide protective immunity.Those born after 1957 didn’t have that exposure and don’t carry that same protection. 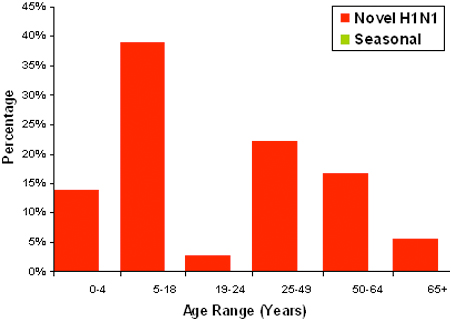 According to the Minnesota Department of Health, here’s a rough breakdown for who in Whoville is coming down with the fluville in the month of September:

5 percent involve those age 65 and over

Nationally the CDC reports that the H1N1 activity that was initially concentrated in the southeastern corner of the country has now spread from coast to coast. Twenty-six states are reporting widespread activity, while the remainder — generally states in more northerly climes — are reporting local or regional activity. The U.S. Virgin Islands didn’t even bother to report — and they wonder why they’ve never been granted statehood. Listen, if you can’t do the little things, how can we trust you to do the big things, like collect federal taxes?

Testing on specimens submitted to the CDC show that 99 percent of all sub-typed influenza A viruses turned out to be the novel H1N1 virus, so practically speaking, if you have an influenza-like illness, it’s almost certainly H1N1.

There continues to be good news for those who are sick enough with H1N1 to require treatment. Only a sliver of H1N1 isolates — about 0.6 percent — have been found to be resistant to oseltamivir (Tamiflu), whereas the most common strain of this year’s seasonal influenza is nearly completely resistant. And there appears to be no resistance to the other major flu-fighter, zanamavir (Relenza), amongst any of the active flu strains. So we have something in the bag in case we need it.

For health care and emergency workers, H1N1 vaccines arriving ‘soon’
Yesterday the CDC announced that Minnesota will “soon” be receiving 28,000 doses of an H1 N1 version of Flumist, a vaccine that’s squirted into the nose rather than injected as a shot. This first shipment will be administered to health care and emergency workers because, as an MDH press release explains, health professionals are a potential recipe for disaster. Not only does their work make it easy for them to become infected with the virus, but it also makes it easy for them to spread the illness to those people who are at the highest risk of getting a serious infection — patients with chronic medical conditions. And besides, none of us wants to have the backbone of our health-care delivery system at home coughing and soaking through the sheets if a surge of infections ends up crowding hospitals and clinics.

But the answer may be simpler than that. Health care workers will be first in line because a number of the other people on the high-priority list aren’t eligible to receive Flumist. As a relatively new vaccine, Flumist hasn’t been approved for use in pregnant women, children under the age of 2, asthmatics, or those with chronic medical conditions. Unfortunately those folks will have to wait patiently for the regular vaccine to arrive. MedImmune, the makers of Flumist, predicted they’d be ready to ship by the last week of September, so if “soon” is really “soon” they should be good to their word. If the manufacturers of the standard H1 N1 shot are just as punctual, in two weeks there will be vaccine available for the rest of those on the high-priority list.