After spending the last two weeks working in a field hospital in Port-au-Prince, internist and pediatrician Dr. Peter Melchert is heading home today (see two previous posts here and here). He’s finding it hard to stay, and hard to leave.

“I’m so excited to go home and see my wife and my son, but at the same time, I’m going to miss a lot about being down here,” Melchert told me. “I love the Haitian people; they’re really so beautiful and brave. And as a physician, I don’t think I’ve ever felt so useful and so productive.”

Melchert says the fierceness of the Haitian people is embodied by a Creole phrase “Ne pas grave,” which translates to “Not that bad,” as in, “It’s not that bad.” I asked him if this carries a different meaning from Garrison Keillor’s “It could be worse” depiction of low-boil Scandinavian pessimism.

“I think it’s different than in the Midwest, where it’s more of a tongue-in-cheek thing,” Melchert explained. “‘Ne pas grave’ is more of a response to a series of crises, disasters and indignities,” he continued, and Lord knows, Haiti has had plenty of that.

Replaced by U of M colleague
Melchert’s leaving will be a little easier knowing that he’ll be literally swapping seats on the charter plane back to Fort Lauderdale with his replacement, Dr. Brad Benson, chairman of the medicine/pediatrics program at the University of Minnesota. “The med/peds folks at the ‘U’ are really internationally focused, and so I think it will be a great experience for him,” Melchert told me. “It feels really good to know that the work is going to go on, and that it will be done well, and that it is going to be finished properly.”

Unfortunately, the health work in Haiti may not be “finished” for a long time, as trauma wounds give way to more subtle but serious public-health issues like dysentery, malnutrition, malaria, etc. These illnesses aren’t new to Haiti, but the crowded, unsanitary conditions seen in the ubiquitous tent cities of Port-au-Prince will only make things worse. And, as Melchert describes it, no one seems to be in a hurry to leave the tent life, even if they have a home that appears safe to live in. His patients continue to sleep outside on the hospital grounds.

“It’s raining right now, and everybody is outside!” Melchert exclaimed. “We put up some tarps and everybody rushes under the tarp area when it rains.”

The earthquake has created two things in high quantities: rubble and orphans. Melchert’s hospital recently admitted a 7-year-old boy who had had his broken thigh bone repaired on the USNS Comfort. “No family — can’t find his family — and he came to us for some rehab, physical therapy, and some TLC.” For the first four days the boy seemed to be the perfect patient — quietly eating his meals, going through therapy — but then things changed.

Intense agitation
“Starting last night, he’s had some intense agitation, believing there are insects under his cast, and continuing to have images of walls falling down on his leg. And it’s taken six of us to hold him down. He’s taking his hands and beating his cast and trying to tear it off. So we actually took it off tonight — showed him that everything is fine.”

They gave him a new cast, and a stuffed animal, and he seemed reassured, until the behavior started all over again later that night. Melchert ended up cutting the cast in half lengthwise, then wrapping the two halves together with an elastic bandage. It’s not ideal, but it allows staff to show the boy his thigh when one of these episodes begins. 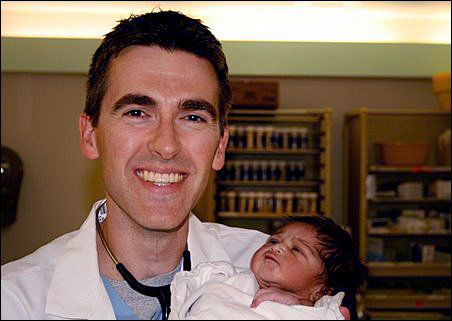 Courtesy U of M Medicine-Pediatrics Program
Dr. Peter Melchert and a patient appear on a U of M brochure.

It seems likely that the little boy’s outbursts are physical manifestations of his trauma and grief, but even the Creole translators can’t figure him out. They say he seems inconsolable. One would think that a little boy who’s been separated from his family would continually be asking staff about his family’s whereabouts, but this boy doesn’t, probably because he’s in emotional shock. Melchert says that this is not unusual, and describes other cases where it appeared that the hospital staff was more concerned about finding family than the orphan was.

Some of Melchert’s patients have been cut off from their family not by death, but by migration. “We’ve got a 20-year-old who’s seven months pregnant. Her home was destroyed, and while she was on the USNS Comfort, her entire family left for the provinces [rural Haiti]. That’s what many families are doing. They just want to get out of Port-au-Prince, because there’s nothing here for them. Many families originated out in the rural areas, and they came into the city to try and find employment and opportunity. Seeing that there’s none here, and that the city is destroyed, they’re returning to their origins in droves. So her whole family went back to the provinces but she doesn’t really know where, and she has no way to contact them. She really has no plans if we were to discharge her from the hospital — where she would go, what she would do.”

Progress of ‘Princess’
Looking for brighter news, I ask about a teenage patient of his whose beauty and doting family have earned her the nickname “Princess.” She suffered a crucifix injury when the steel rods sticking out of a falling slab of concrete went through both of her feet.

“She’s doing great — her rebar wounds are almost entirely closed,” Melchert reported. “When I first came here you could stick your finger through her wounds, in and out, completely through, and now, they’re almost completely closed. Part of that is our meticulous wound care, but I think the most important part is that she has a clean place to stay, clean water, and three meals a day that we provide her.”

“Princess” celebrated her 15th birthday this week, and her pain has improved to the point where she is able to walk around, very gingerly, providing a morale boost for the entire staff at Heartline Ministries. “She came in on the very first day that this whole operation started,” Melchert said, “so she’s kind of an emotional victory for all of us.”

Coming home has its challenges, too
I’ve never been immersed in the disaster situation that Melchert is in, but I’ve spent time on medical missions to poor rural areas of the Dominican Republic and Ecuador, and the return to the United States can be difficult. There was a period where it wasn’t clear to me which was real — the extreme poverty, or the extreme wealth. It didn’t seem possible that both could be true, but of course they are. This sociologic version of “the bends” also means that getting back to seeing patients can be a little awkward, and Melchert is familiar with it.

“I’ve experienced that before coming back, where the complaints of the patients I am seeing are very real to them, but after what I’ve experienced here, they seem very trivial. And I struggle with that, because I want to serve everybody, and answer their questions and address their concerns. [Back home] it’s somebody’s gall bladder removal scar that itches a little bit, when I’m seeing [here in Haiti] this 3-year-old kid with flaccid paralysis and worms coming out of his bottom. … Every minute here, what I’m doing is direct patient care, helping somebody in that moment. In that very moment I’m directly helping that person, not spending it documenting, dictating.”

As we wind down our conversation, the chickens outside his window let loose with another cacophony of clucking and crowing. Melchert won’t miss them, but his young son will. “Every time I call him, he yells, ‘Daddy, I want to hear the chickens!’ “