A medical bill is a shocker, even for those with insurance coverage. An emergency-room visit with multiple tests can cost as much as a car. Major surgery? Think mortgage-sized sums.

The sobering reality that Americans could collectively go broke paying such bills for an aging nation has ignited challenges to traditional ways of financing health care. 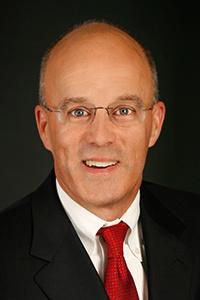 “You are going to see by the end of this decade a significant change,” said Dr. Lee Newcomer, senior vice president of oncology at Minnetonka-based UnitedHealthcare.

But the change will come gradually, he stressed: “You won’t see it next week.”

Few patients have a higher stake in the transformation than those who are late in life — when treatments for chronic conditions pile up, and so do associated costs. By far, these patients account for the greatest share of health care expenditures and also the most widespread need for quality care.

Visit the website of any institution involved with health care financing and you find ideas for revamping the system. Some ideas are controversial in medical circles; some may fail; some show promise.

Two recently reported initiatives help illustrate the nature of the drive for change:

U.S. health care spending has consumed an increasing share of the nation’s economic activity, according to the Kaiser Family Foundation.  In 2010 the country spent $8,402 per person on health care for a total of $2.6 trillion, which was 17.9 percent of GDP. Back in 1960, it spent 5.2 percent of GDP on health care. 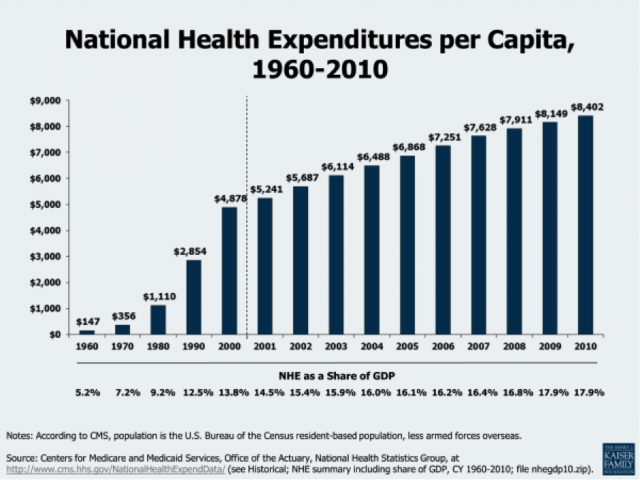 The rate of growth in national health spending has slowed in recent years. But experts inside and outside the health care system warn that aging baby boomers will push costs higher.

“Unfortunately the rising cost of health care in the United States is on an unsustainable trajectory,” Newcomer wrote in a commentary in the May Journal of Oncology Practice. He also co-authored the separate bundled-payment report.

Cancer therapy, in particular, accounts for about 11 percent of the total health care budget, and it is the most rapidly growing segment of health care. In Minnesota, cancer is the leading cause of death, followed by heart disease and stroke.

Overall care for people with such chronic diseases accounts for more than 75 percent of health-care spending, according to the Dartmouth Atlas of Health Care, which analyzes Medicare reimbursements. Americans with five or more chronic conditions represent a disproportionate share of that cost. In 2005, they represented 23 percent of Medicare beneficiaries and 68 percent of Medicare spending.

The costs rise dramatically as diseases progress toward death, the Dartmouth Atlas reports. In Minnesota, Medicare paid out an average of $70,000 during the last two years of life for people who died in 2010. More than half that payout, $36,000, came during the last six months of life when the typical patient was treated by nine different doctors.

Fee for (too much?) service

Under the traditional fee-for-service model, doctors, hospitals and other providers collect a fee for each visit, test, prescription and treatment.

That model is under critical review for several reasons:

Now, alternatives to fee-for-service are rolling out on several fronts. Some build on bundled payment schemes in which doctors and other providers get lump sums for treating particular episodes such as a diagnosis of cancer. They come out ahead financially if they avoid unnecessary tests, hospitalizations, etc.

In the UnitedHealthcare study, oncologists got a single payment at initial visits with 810 patients who had been diagnosed with breast, colon or lung cancer. The payment was the same regardless of the drugs administered to the patients; in other words, the oncologists’ incomes were separated from drug sales. Other aspects of the care – patient visits, for example – were reimbursed under the usual fee-for-service arrangement.

Researchers, who used more than 60 measures of quality and cost to evaluate the results, reported that no quality of care was lost during the course of the treatment, which typically lasted six to 12 months.

What changed dramatically was the overall cost of the care. It dropped by 34 percent compared with a control group, the researchers reported. Unexpectedly, the savings did not come from chemotherapy drugs. That cost rose. Instead, money was saved primarily because the patients weren’t hospitalized as frequently and they received less radiation therapy.

The upshot was better treatment for patients, Newcomer said in an interview. The doctors spotted symptoms and side effects more quickly and treated those problems early enough to avoid the need for hospitalizations.

Another benefit for late-life patients whose cancer had returned and spread, he said, was that doctors had more incentives to work with the patients through a range of options, including the option to stop treatment.

“In fee-for-service, the only way that the oncologist is able to make any money taking care of those patients is to treat them,” Newcomer said.

But what if doctors simply took the money and didn’t spend that extra time with the patients? The study was designed with numerous checks against that potential, he said, and the participating doctors had volunteered because they were motivated to “find a better way.”

The intent was to move away from a system that paid providers based on the volume of care they delivered rather than the quality of the care. The initiative is one of several state moves toward that goal since a health reform law was enacted in 2008. For example, the state implemented a “pay-for-performance” program that offers cash awards to doctors and nurses who achieve specified clinical results in treatment of diabetes and cardiovascular disease.

In this latest initiative, state officials estimated that the new payment system would save Minnesota’s Medicaid program some $90 million over three years while encouraging providers to innovate in care delivery and also to set realistic goals for improving the cost and quality of care.

“This new payment system will deliver better health care at a better price,” Gov. Mark Dayton said at the time. “By changing the way we pay health care providers we can incentivize reform, help Minnesotans live healthier lives, and slow the rising cost of health care in our state.”

In July this year, state officials announced that the program had yielded $10.5 million in savings during its first year. Three more providers also had signed up with more yet planning to join in 2015.

Even while innovative payment models roll out, various players in the health care system remain skeptical.

Some worry that well-intentioned plans ultimately will fail. Doctors involved in high-profile studies may be eager to deliver quality care, but will the quality stand up over time and widespread practice?

Another worry is that patients’ individual wishes will be lost in large integrated financing schemes. As program managers set measurable standards for quality treatment, will they lead to care that patients actually want?

Yet another worry is that doctors and clinics pressed financially to meet outcome benchmarks will reject high-risk patients who could bring down their performance numbers. Will benchmarks be designed with enough sophistication to neutralize this scenario?

Meanwhile, many experts argue that health care institutions have a long way to go in other reforms that could curb costs and improve care – reforms such as efficiently sharing patients’ records and coordinating patients’ needs for social services in tandem with health care. (See the first article in this series.)

‘We have to figure this out’

What isn’t disputed is the urgency of the need to contain costs before baby boomers reach late-in-life status.

“When we double the number of frail old people as all of us boomers grow old together, we have to figure this out,” said JoAnne Lynn, director of the Center for Elder Care and Advanced Illness at Altarum Institute. “Otherwise we will either so hobble the country that we can’t do other important things, or we will learn to walk away from real need in old age.”

This series is funded through a regrant by Allina Health from the Robina Foundation. It is conducted in conjunction with media partners Ampers andTwin Cities Public Television (tpt), whose documentaries (click on “Archive” on the linked web page) are focusing on Minnesotans enrolled in a multiyear Allina study involving patients at this time of life.