This article is part of a yearlong occasional series on late-in-life health care — when chronic illness or a constellation of medical problems can cause a cascade of new needs, complications and worries. The series is funded through a regrant by Allina Health from the Robina Foundation and is conducted with media partners Ampers and Twin Cities Public Television (tpt), whose documentaries are focusing on Minnesotans enrolled in a multiyear Allina study. A new episode, “Meaning & Legacy,” the fourth of six, will premiere Thursday, Oct. 30, at 9:30 p.m. on tpt 2.1. 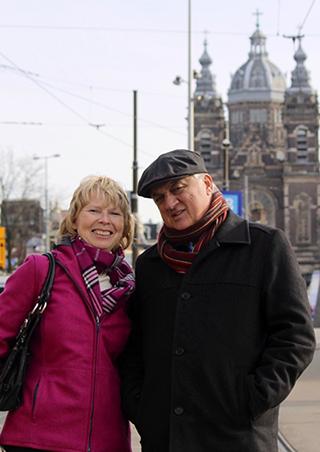 Imagine these services for someone who wants to live at home while coping with life’s late stages: A neighborhood doctor makes frequent house calls – often by bicycle. The city installs a chair lift on a staircase. A professional team steps in to help with everything from lawn maintenance to house cleaning to grocery shopping.

This is not a fantasy system. It is the reality that Jim and Johanna Christenson of Pelican Rapids, Minnesota, found in the Netherlands where Johanna grew up. The Christensons have travelled frequently to visit her Dutch family and to help relatives who suffered late-life ailments including Alzheimer’s and heart diseases, cancer and the general decline that comes with old age.

Their European relatives routinely were surrounded by support that would be out of reach for American families unless they enjoyed the means to cobble it together on their own. It’s a level of care that is seen in other developed countries as a moral imperative — as the support that any well-to-do, civilized society should extend to the sickest and weakest of its members.

“Let me say I am impressed by Dutch health care,” said Jim Christenson, a U.S. citizen who retired last year and now travels to Europe for extended stays.

“This is the reason I prefer living in the Netherlands,” Christenson said. “The culture is mature and civilized. Nowhere does that shine brighter than in the way the Dutch treat one another.”

They pay for it too.

America spends far more on health care than other developed countries, according to a report by the Kaiser Family Foundation. Measured in sheer dollars, health spending in the United States — $7,598 per person in 2009 — was 48 percent higher than the next highest spending country (Switzerland), and about 90 percent higher than in many other countries that we would consider global competitors, Kaiser reported. 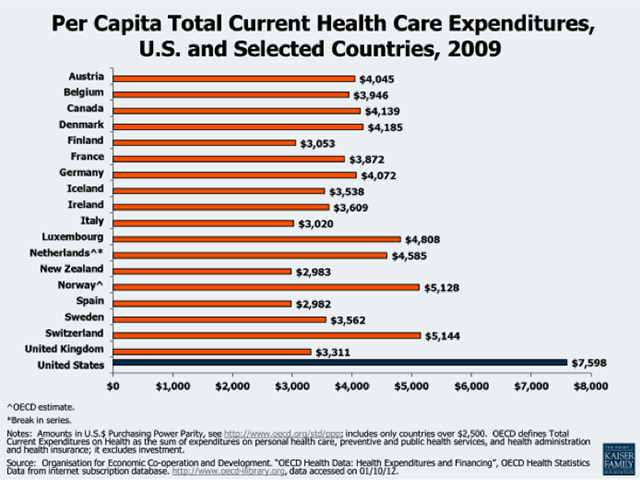 It would be reasonable to expect that Americans also get better outcomes from their health care systems.

They do not, by several measures.

“Despite this relatively high level of spending, the United States does not appear to achieve substantially better health benchmarks compared to other developed countries,” said Kaiser’s report.

In fact, the United States lags behind other developed countries in key health indicators. The United States ranks 42nd among countries in the CIA World Factbook’s latest estimates of life expectancy at birth, behind most European and many Asian countries. A baby born this year in Monaco (ranked No. 1) could be expected to live 89.57 years, compared with 84.46 in Japan (No. 3), 81.12 in the Netherlands (No. 22) and 79.56 in the United States.

Further, researchers at the New York-based Commonwealth Fund rank the United States last among 11 developed nations on a range of health-care performance measures. While the United States placed third in the effectiveness of the care that was delivered, it was scored as less efficient, accessible and equitable than the other countries. It also ranked last in healthy living as measured by factors of mortality and life expectancy. (For a deeper discussion of Commonwealth’s 2014 study, see Susan Perry’s report in MinnPost.) 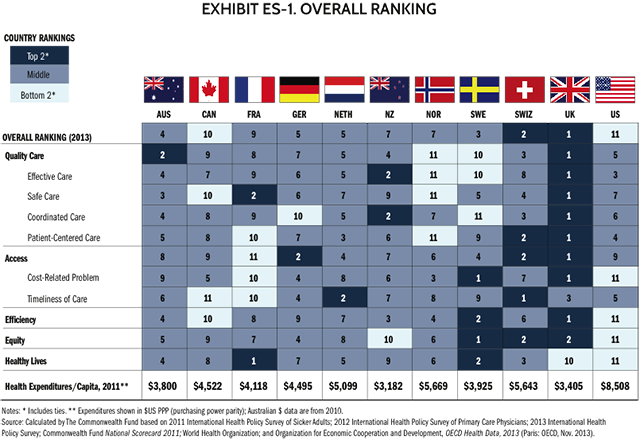 Given those outcomes, experts in the United States are questioning the nation’s spending priorities. The country pours most of its health-care dollars into last-ditch efforts to save patients who are battling killer diseases. But patients and their caregivers are left largely on their own to struggle with the myriad of day-to-day practical needs posed by chronic illness and multiple medical problems.

In contrast, many other well-off countries place a high priority on providing comprehensive social support for patients and their caregivers as well as personal medical care.

For example, other countries in the Organisation for Economic Co-operation and Development (OECD) provide an average of $2 worth of supportive services for every dollar spent on health care. That is twice the amount the United States spends per health-care dollar, according to analysis of OECD data by Prof. Elizabeth Bradley of the Yale Global Health Leadership Institute.

Increasingly, health-care experts point to that disparity to explain the reasons that the United States lags behind other countries in life expectancy and other key health measures despite its enormous health-care investments.

Bradley and a colleague dubbed the problem America’s “spend more, get less” paradox in an article for the Yale Alumni Magazine in 2011.

“Safe housing, reasonable employment, and proper food supports may be more important for the population’s overall health than specific medical care,” they said.

American writer Russell Shorto described life under the Dutch health and social support systems in an article for the New York Times Magazine in 2009.

Shorto lived in the Netherlands at the time when the country had just revamped its health-care system, coming up with a sophisticated model that is not at all a government-run, cradle-to-grave welfare system. Among other changes, the system was privatized, offering consumers a choice of insurers and plans. But it also was regulated – for example, making it illegal for an insurer to refuse to accept a client or to charge higher premiums based on age or health.

“I’ve found that many differences between the American and Dutch systems are more cultural than anything else,” Shorto said. “The Dutch system has a more old-fashioned, personal feel. Nearly all GPs in the country make house calls to infirm or elderly patients.”

Overall, Shorto said, the Dutch system reflects a state of mind that is different from American attitudes: “People have a matter-of-fact belief not in government — in my experience the Dutch complain about government as frequently as Americans do — but in society.”

Many say that the Dutch take a stronger we-are-all-in-this-together attitude toward life’s major challenges, and that attitude is rooted in the nation’s history of holding back the sea. A flood for one eventually would be a flood for all. So, they’ve had to cooperate over the centuries on maintaining systems of pumps and dikes. And the cooperative model took hold in other aspects of life as well.

Other European countries that stand out in the quality of their late-life care have their own reasons for strong social support systems. It is no coincidence that Sweden and Norway generally top the list, with value systems based on a culture of consensus and social cohesion.

Even close-knit European societies are strained now, though, under the costs of caring for aging populations, especially given the economic turmoil of the past five years.

The Netherlands’ recently inaugurated King Willem-Alexander rocked Europe last year by using the occasion of his first annual appearance before the parliament to deliver a stern warning that the country could not sustain its social welfare system.

The classical welfare state “is slowly but surely evolving into a participation society,” the king said in a speech that was written by the government. He added that “Everyone who is able will be asked to take responsibility for their own lives and immediate surroundings.”

While emphasizing that the Dutch could work together to ensure that no one gets left behind, the king said his vision for a “participation society” was especially needed in the country’s systems of social security and long-term care.

“In those areas in particular, the classical post-war welfare state produced schemes that are unsustainable in their present form and which no longer meet people’s expectations,” he said.

Not surprisingly, the king’s words met strong pushback in the Netherlands and across Europe. It remains to be seen how far Europe’s social support network will shrink in the new mandate for austerity.

Eliminating or reducing services isn’t Europe’s only option. The Dutch king seemed to be calling for more community engagement — for families and neighbors to pitch in and help those in need.

But they also question the future for late-life relatives in the United States: Will home health care be available? How quickly would institutional care drain family coffers? Is individual long-term-care insurance worth the cost?

Even given Europe’s austerity drive, it is easier to trust the future under that system, he said.

“It’s a matter of social sensitivity, maturity and civility,” Jim said. “It seems to me that Europeans care more for their fellow citizens.”

Under the Dutch system, neighborhood doctors frequently made house calls while Johanna’s parents needed care at home. Thanks to a network of public and private programs, the family also was able to get a chair lift on the staircase of her parents’ home as well as a wheelchair and other devices. Warm meals were delivered to the home. Eventually, a support team provided home health care as well as help with household chores, grocery shopping – even, weeding the garden.

Relatives pitched in too. Now the Christiansons expect to do more of that under the Dutch concept of mantelzorg — meaning unpaid, informal care for one another.

“Where we will live when we need care, who will provide it and what it will cost remains to be seen,” Jim said. “Hopefully our Karma Account will be adequately funded.”

Late-in-life: As U.S ‘spends more and gets less,’ the Dutch offer myriad health and social supports