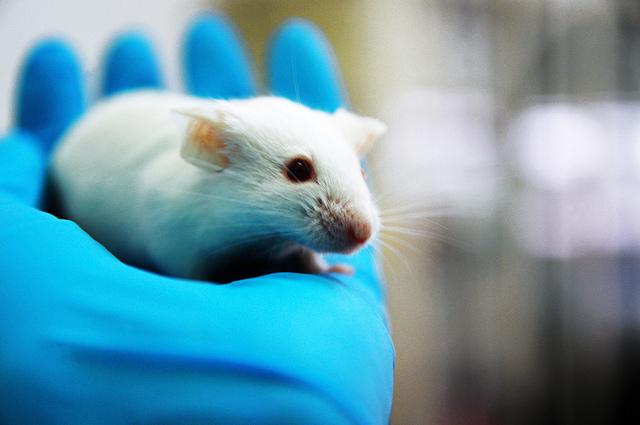 CC/Flickr/Mycroyance
In this experiment, identically bred and reared mice differed in only one variable: whether the nerves in the memory part of their brain could take up iron.

NEW YORK — The geometry of a disorganized brain is striking.

In a side-by-side comparison of two magnified brain cell images taken from rodents and stained green, one shows a uniform arrangement of brain cells: flat, straight filaments side by side, close and ordered as teeth on a comb, eerie with the filamentous beauty of a northern lights curtain display.

On the other slide, the straight, flat lines are fractured. All is a jumble of sharp angles, lost pattern, broken connections between neurons: shards of the very structures that thought, feeling and action rely on for responding to the environment, processing stimulii, integrating information, transmitting, reacting, creating, controlling, caring, succeeding — or not.

“This is the brain on iron deficiency,” explains University of Minnesota neuroscience researcher and pediatrician Dr. Michael K. Georgieff, pointing to the shards in images from his animal research into the role of nutrition in early brain development.

In this experiment, identically bred and reared mice differed in only one variable: whether the nerves in the memory part of their brain could take up iron. One animal was iron sufficient, and one animal was iron deficient during gestation and early life. Results show both brains and behaviors were radically affected by early iron deficiency. 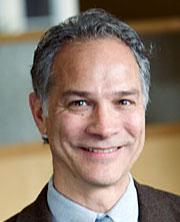 A professor of pediatrics, Georgieff also directs its Center for Neurobehavioral Development. As a result of his teams’ interdisciplinary achievements at the intersection of advanced fields ranging from molecular neuroscience to educational psychology, Georgieff is an internationally acclaimed collaborator and authority on nutritional needs of the developing human brain, particularly iron. He  spoke here last week to a gathering of neuroscientists, physicians, nutritionists, educators, therapists, early childhood specialists and policymakers attending the 5th annual Aspen Brain Forum, a forum he helped organize.

Held at the New York Academy of Sciences, one of Aspen’s partner organizations, along with The American Association for the Advancement of Science’s journal, Science Translational Medicine, the forum’s goal was to help define an emerging public-health crisis.

It is a crisis that is as unusual — in terms of what typically is considered a concern of public health, such as clean water supplies or contagious diseases — as it is urgent: brains poorly built through neuronal disorganization in infancy and childhood due to nutritional deprivation at key development points in the first 1,400 days, from gestation through age 3 (see infographic).

Findings at a glance

Results from Georgieff’s and colleagues’ animal work on iron show:

Researchers agree that the rodent brain is an appropriate model for the human brain, and that it is valid to translate experimental animal work into hypotheses of human health. In humans, widespread brain underdevelopment due to the impact of iron deficiency in key structures of recognition, memory and learning poses a public-health risk to society because it requires extra public resources to help attain mental health, civic productivity, personal happiness and success. Most — if not all of this developmental deficit — can be avoided through adequate nutritional intake of iron and other key nutrients at the right development times known as critical or sensitive periods. 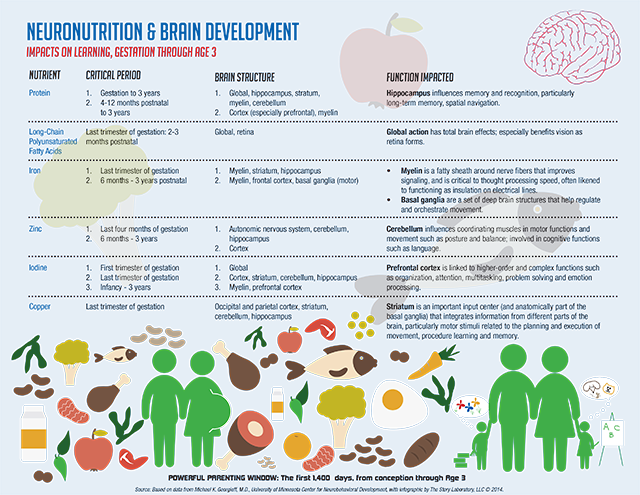 The concept of a link between brain, nutrition and timing of nutrients at sensitive or critical periods is the foundation of the emerging field of neuronutrition.

“Basic nutrient-brain interaction principles include the roles of timing, dose and duration in determining developmental risk to brain structures and processes,” Georgieff says.

Neuronutrition was embraced by Aspen Brain Forum attendees as a promising evidence-based platform on which to build social brain-health programs that are novel, widespread and simultaneously multigenerational — addressing parental nutritional needs during their reproductive years as well as that of their children’s own unique infant and toddler biology. Such outreach could even one day include preconception counseling and nutrition education programs for both males and females who are potential parents.

“This is not to say it’s too late to help if we miss critical periods of early brain development,” Georgieff notes. “It is to emphasize that early is always better, and while late is never too late, as a society, I would think this knowledge of the brain-nutrition-timing link would move us to act early to do everything we can to help attain the best developmental outcomes for our youngest citizens so they can grow into the most capable adults possible.”

Anne Brataas is the CEO and founder of The Story Laboratory LLC, St. Paul, an international science-writing consultancy.