There will be free sunscreen at the State Fair this year — a high-end lotion available from dispensers at all 11 information booths — and credit for the idea goes to Dr. Megan Wood, who pushed the plan as a tribute to her father.

Wood was a second year medical student when her dad, John W. Wood, Jr., a Wayzata attorney, was diagnosed with stage four melanoma. He died six months later, in 2012. He was 65, an active athlete who rode his bicycle 2,000 miles the summer before he died.

“I want into a mode of vengeance against melanoma,” said Wood, now a resident/intern at Hennepin County Medical Center. “I wanted to do something, to change the world, to make a difference.”

She attended a Melanoma Research Foundation volunteer summit in Washington D.C., looking for positive ways to funnel that energy after her father’s death.

“We brainstormed ideas; some decided to write letters to make legal changes, like not allowing those younger than 18 to use sun tanning beds without their parents’ permission. Others worked on fundraising,” she said.

Her focus turned to finding a way to provide sunscreen at outdoor venues. “When we know something is dangerous, we do something about it. We have smoking bans and we ban asbestos,” she said.

But she knew this is different from smoke or asbestos; you can’t ban the sun. And for sunscreen protection to work, people have to take an active role, applying it often and thoroughly.

So she’s armed herself with facts on melanoma and skin cancer:

“We need to take measures to stop that trend,” she said.

And because there’s no cure, prevention is key.

The State Fair, she figured, would be perfect: A huge outdoor event with people exposed to the sun all day. And it’s not like the pool or the beach, where they tend to think about bringing and applying sunscreen.

“I started by Googling it. And, of course, when you think you have an original idea…I found that I wasn’t the first to think of it,” she said.

She learned that many places in  in Australia and New Zealand provide free sunscreen. The Texas State Fair does, too. So does Miami Beach, at parks and beaches. And Arizona, too, where she found a mentor, Denise Spartonos of the University of Arizona’s Skin Cancer Institute, which conducts much work on skin protection. 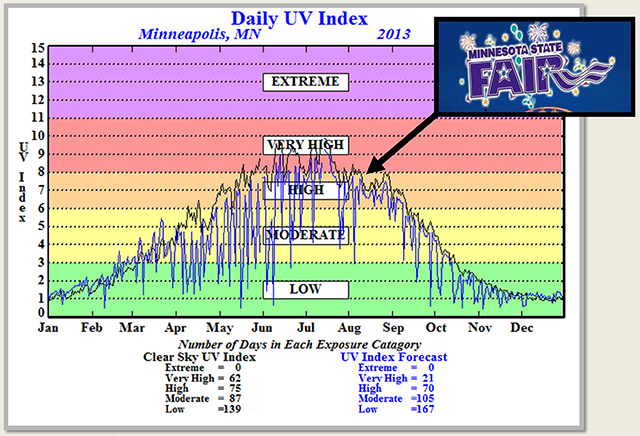 University of Minnesota Department of Dermatology

The next step was talking with people at the University of Minnesota, where she was attended medical school; she came up with a plan to gather data at last year’s State Fair.

At a table with dermatology folks (who did skin checks) at the University’s Driven to Discover Building on the fairgrounds, she conducted a survey, asking fairgoers about their sunscreen habits and whether they’d use it, if available.

With 320 responses, she found:

With those positive results, she contacted the fair and got a January meeting where her proposal went over well and this year’s project was hatched.

The first choice for a sunscreen was Vanicream, a high-end, dermatologist-recommended product made by Pharmaceutical Specialties, Inc., in Rochester, Minnesota. Meetings with a company rep and the fair resulted in a deal.

“We all had the same goal: save people from skin cancer. The fair wanted to do something good for the public and the company wanted to get its name out there,” she said.

The logistics were next: “I wanted to make a map of places on the fairgrounds where it would be available, but the fair said we have to keep it simple: there already are lots of maps and things to remember. Their idea was to put dispensers at each information booth.”

The Texas fair used 50 gallons of sunscreen, so Wood and fair officials project that they’ll go through about 100 gallons here.

“Part of this year is about figuring things out: people might say in a survey that they’ll use it, but you never know until they do it. We’ll observe from afar and randomly survey some people about how much they use,” Wood said.

With more data on usage, and demographics, and other protection, like hats, they’ll fine-tune the program.

Said Wood, “I feel very positive about how this is turning out. Everyone I’ve presented it to has received it well and wants to help. People have been touched by skin cancer. They know someone who died from it.

“And when people see sunscreen at the fair, maybe they’ll realize even more how crucial it is and think: ‘It must be important if the State Fair wants you to do it.’ ”