Ever know someone to come down with a case of diptheria?

You might have in 1888, when the disease, a bacterial infection that can cause swelling in the neck and pumps toxins into the bloodstream, caused about 6 percent of deaths in Minnesota, often of kids. 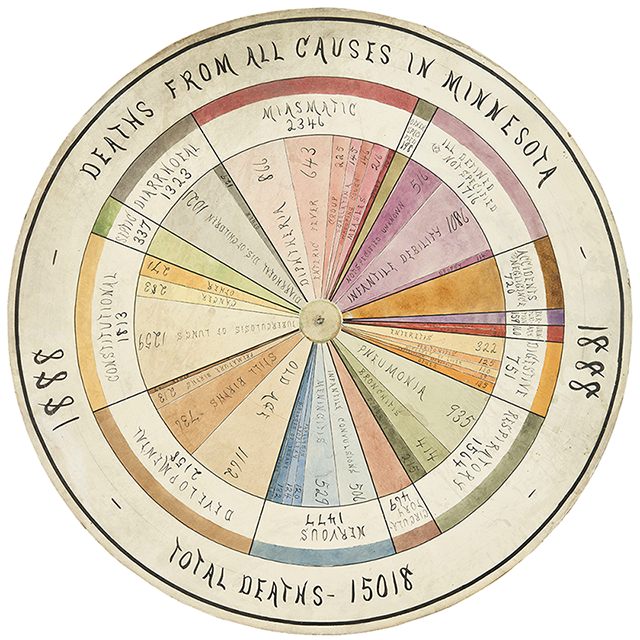 Courtesy of the Minnesota Historical Society
Click on the 1888 Cause of Death chart to view a larger version.

That’s just one of the striking things we can learn from a Victorian era pie chart that shows how Minnesotans died in 1888 — 130 years ago. It’s one of several charts, 22 inches in diameter, painted in watercolor, that were found by Minnesota Historical Society government records assistant Anjanette Schussler among old Minnesota Department of Health records (a high-definition version of the chart can be found here).

Peek at the chart, and you’ll notice deaths from some illnesses that might only ring a bell from episodes of “Dr. Quinn, Medicine Woman.” People don’t really die from diptheria anymore: There’s a vaccine for it, it’s treatable with an antitoxin and antibiotics, and fewer than five cases were reported to the Centers for Disease Control and Prevention in the last decade. While tuberculosis is still around, it’s no longer a leading cause of death. In 2018, no doctor would write “diseases of insane” on a death certificate today.

In 2018, Minnesotans die from a different lineup of illnesses. Compared to 1888, when the most common causes of death were tuberculosis, old age, infantile debility, a term for failure to thrive, and childhood diarrheal illnesses, today’s biggest killers of Minnesotans are cancer, heart disease, unintentional injury and chronic lower respiratory disease, according to 2016 data from the Minnesota Department of Health.

The stark difference between the two is due to a few factors, said Dr. W. Bruce Fye, emeritus professor of medicine and the history of medicine at the Mayo Clinic.

Thanks to advancements like antibiotics and vaccines, many of the big killers of Minnesotans of yesteryear are preventable or treatable today.

Malarial fevers, a term for summer fevers that were a common killer particularly in the south, are actually what drove the Mayo family to Minnesota in the first place, he said.

Of the then-common illnesses, Fye said, “Most of these, certainly in the U.S., most of these are now preventable or eliminated.”

The tail end of the 19th century was a turning point in modern medicine, Fye said — it was around this time that the medical community was beginning to understand bacteria’s role in causing disease; use of microscopes started to become more widespread. It was around this time, too, that sanitation and public health became more of a concern.

The very existence of the chart speaks to some interest in public health, said Jole Shackelford, an assistant professor in the History of Science, Technology and Medicine program at the University of Minnesota.

“Somebody’s compiling the data for some reason. A physician wouldn’t compile something like this, it’d have to be somebody interested in public health,” he said.

Cities, in particular, made efforts to clean up water and sewage that were cesspools of disease. By the 1930s, because of things like treated water, you already started to see many of these diseases’ prevalence decline, Shackelford said.

Medical professionals also began to realize the importance of sanitary surgery around the turn of the 20th century, Fye said.

But this was still decades pre-penicillin, and the only medicines available were either ineffective, or homeopathic in nature, like digitalis, made from foxglove and used to treat heart conditions.

“Every home had a home medical guide, or two or three of them (that) would talk about basically what plants to grind up … what botanical things might help you,” Fye said.

Another reason the causes of death are so different between 1888 and today is life expectancy. Then, the life expectancy was about 45 years, Fye said. Today, it’s nearly 79, according to the CDC.

Part of why life expectancy was so low 130 years ago was infant mortality — life expectancy is an average, and you had a lot of people dying at very young ages, pulling the number down.

But tuberculosis, childbirth and other diseases killed a lot of young adults, too. Most people didn’t live long past middle age.

One big caveat to the 1888 death data is how accurately doctors were able to determine the causes of their patients’ death.

Around 1888, the level of education required to become a doctor would have typically been three years of medical school — no internship and in some cases, no college degree, required, Fye said. That’s compared to more than a decade of education and training for doctors today.

And then there’s the tools. The average doctor would have had a stethoscope, which could help him diagnose audible conditions like pneumonia, Fye said. But this was pre-X-ray, not to mention pre-EKG and pre-MRI, which left doctors to what they could determine based on symptoms or autopsies.

Some of the categories of the diseases on the chart also show how differently we understand disease today, Shackelford said.

The term miasmatic, for instance, which he said goes back to Hippocrates, referred to changes in the air, such as wet to dry or hot to cold. Those changes were thought to have major effects on health at the time.

Today, we know that the diseases shown in that grouping, like diphtheria, scarlatina (scarlet fever), croup and whooping cough are caused by bacteria or viruses, not necessarily air (though the viruses and bacteria could be airborne). In the Victorian era, there were also beliefs about insanity, and hysteria among women, that would never pass medical muster today.

“It’s all changed since then, both the nature of the diseases we’re subject to but also how we think about them was completely changed by laboratory medicine,” Shackelford said.

If there’s one thing this watercolor wheel of death makes clear, it’s that, between the life expectancy discrepancy and the skill of doctors at diagnosing and treating illness, 2018 is a better time to be alive and stay alive than 1888.

“This image is a beautiful one and to the modern eye embodies this transformation in medicine and public health,” Shackelford said.

What killed Minnesotans in 1888, what killed them in 2016, and why it changed