The tiny tick’s bite, the bullseye rash that often appears, the aches, the chills. It’s a sequence of events familiar to an increasing number of Minnesotans as the symptoms of Lyme disease, a bacterial infection transmitted by ticks. (The Lyme name comes from the town of Lyme, Connecticut where the disease was identified.)

In the short term, the disease causes flu-like symptoms, including fever, tiredness and aches, and is treated with antibiotics. But left untreated, Lyme can lead to swollen joints, facial palsy, numbness and other symptoms.

Lyme is a growing public health concern in Minnesota as the number of reported cases steadily climbs, from under 300 per year in the late 1990s to more than 1,300 confirmed cases in 2016.

Apart from vigilance, there’s not a whole lot you can do about to prevent Lyme disease. Wear bug spray. Stay out of wooded areas. Check for ticks and if you find deer ticks, get rid of them quickly.

That wasn’t always the case. From 1998 to 2002, a vaccine to prevent Lyme disease, called LYMErix, was available. It’s not anymore. The shots were taken off the market just a few years after they became available for reasons, experts say, that largely stemmed from fears of side effects not backed by science.

As Lyme disease spreads with the blacklegged, or deer tick, to new parts of the country and further entrenches itself in places it’s already well-known, like Minnesota, members of the medical community are concerned. But in terms of vaccines, some worry that the same forces they say helped sink LYMErix could hurt the prospects of another, better Lyme disease shot in the future.

In Minnesota, Lyme disease is primarily transmitted through blacklegged ticks that need to drink blood to stay alive. These ticks are proactive about finding blood meals: they hang out on the edges of, say, a blade of grass at the side of a trail, and wait for its prey to walk by. They then hop on, affix themselves to the skin and proceed to draw blood.

As a tick drinks blood, it regurgitates matter from its midgut, which, in infected bugs, includes spirochetes — twisted bacterium — of the Borrelia burgdorferi variety, responsible for causing Lyme disease in Minnesota.

An estimated third to half of adult deer ticks and 20 percent of nymphs in Minnesota are infected with B. burgdorferi, though rates vary across the state and year-to-year.

The vaccine LYMErix worked by helping the immune system create antibodies to a protein called OspA, present in B. burgdorferi. If a person who had developed antibodies was infected with the bacteria, the antibodies would find the protein and kill it, preventing transmission of Lyme. Feeding on blood from a vaccinated person would also expose infected ticks to the antibodies, killing the spirochetes in the insects themselves.

The vaccine was found to be 76 percent effective in preventing Lyme disease after three injections. But in baseball parlance, the vaccine was not a grand slam: it required booster shots, making getting it somewhat cumbersome, says Gregory Poland, a professor of medicine and the director of the Mayo Clinic’s vaccine research group who has written about LYMErix. The vaccine also wasn’t licensed for people below the age of 15, many of whom are exposed to ticks due to outdoor activity. Insurance companies weren’t mandated to cover it and guidelines over who should get the shots were unclear, Poland said. Furthermore, the vaccine was only aimed at B. burgdorferi, the bacterium that causes Lyme in the U.S., but not at types that cause the disease in other parts of the world.

All of these factors limited the pool of people who would be likely to get the vaccine, making it more difficult for the company that made it, SmithKline Beecham (now GlaxoSmithKline), to make money on it.

The vaccine’s viability was further limited, Poland says, by groups who believed people with certain genes developed arthritis as a result of an autoimmune response to OspA in the vaccine.

That hypothesis was theoretical, not scientifically proven, said Benjamin Clarke, a professor in the biomedical sciences department at the University of Minnesota-Duluth.

The reasoning goes like this: Since immune systems are designed to find anomalies and attack them, there’s a theoretical possibility that some people, because of their genetic makeup, could develop an unexpected, negative autoimmune response to something in a vaccine, Clarke said. Scientists disagree on the degree to which this is even likely to happen or not.

“There are no risk-free choices,” Poland said. “They think, ‘well I’m not going to get this vaccine because I don’t want that risk.’ And there is a risk to every single thing we do, but that risk is greater not getting a vaccine than getting a vaccine.”

In the LYMErix trials, arthritis occurred at the same rate for people who received the vaccine as it did in unvaccinated people and there was no bump in arthritis cases after doses, as researchers would expect if there was a connection between the two, according to an article published on the National Institutes of Health website.

The FDA convened an expert panel to review people’s concerns in the wake of arthritis claims, Poland said: they didn’t find evidence to back them up.

Ultimately, Lyme patient advocacy groups raised awareness about their arthritis concerns and filed class-action lawsuits. Public enthusiasm was dampened for the vaccine. In 2002,the vaccine’s manufacturer discontinued it, citing insufficient demand, according to the Centers for Disease Control.

Pasteur Mérieux Connaught, another pharmaceutical company that was developing a Lyme vaccine that showed promise at the time, pulled plans to make it available to the public around the same time. Lyme vaccines are still available for dogs. 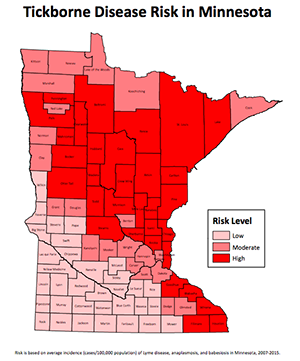 As far as Lyme goes, the Department of Health primarily works around tick surveillance and informing the public about how to prevent the disease. Its guidelines include avoiding areas that are wooded and brushy where ticks are likely to be found, especially from mid-May to mid-July (though ticks can be out anytime it’s temperate), walking in the middle of trails, away from grasses and brush where ticks hang out, using bug repellants, and checking for ticks.

Other alternatives for tamping down Lyme disease, like control of the deer and white-footed mice populations that carry the bacteria or using bait traps or treated nesting materials to reduce the incidence rate of Lyme-causing bacteria in those animals, are expensive and difficult to administer.

In the years since LYMErix was pulled off the market, the number of diagnosed Lyme disease cases has increased. That’s partly due to increased awareness of the disease, Schiffman said, but also due to the spread of blacklegged ticks across Minnesota.

For now, avoiding and removing ticks remains the best option for stopping Lyme disease. Mayo’s Poland has doubts about whether another vaccine will make it to the public anytime soon.

If a company develops another vaccine and successfully gets it approved by the FDA, there’s still the potential hurdle of public perception.

Valneva, a biotech company, is currently testing a Lyme vaccine. (Poland said he has given scientific advice to Valneva.) It would treat more strains of bacteria that cause Lyme.

“They’ve done Phase II testing, now what they have to do is cross what’s called the valley of death, meaning they now have to raise hundreds of millions of dollars to do big studies in order to further study safety and efficacy,” Poland said. “So they’re going to have to enroll a lot of people who don’t have Lyme, give them the vaccine, and a lot of people who they will enroll and not give the vaccine — placebo — and wait a year, two, three.

“That’s why I say this isn’t going to happen any time soon. It’s a process,” he said.

As Lyme disease spreads in Minnesota, researchers consider a vaccine — and the failure of the last one