For the foreseeable future, MinnPost will be providing daily updates on coronavirus in Minnesota, published following the press phone call conducted by the Minnesota Department of Health (MDH) with Gov. Tim Walz and administration officials each afternoon.

Twenty-one more Minnesotans have died of COVID-19, the Minnesota Department of Health said Friday, for a total of 200.

Among the 21 deaths announced Thursday were:

MDH also said Thursday there have been 2,942 total confirmed cases of COVID-19 in Minnesota, up 221 from Wednesday count. Because Minnesota doesn’t have the capacity to test everybody with symptoms, the number of people with the virus is assumed to be significantly higher.

The number of positives is expected to increase significantly as Minnesota begins to test more people under an initiative announced Wednesday to test as many as 20,000 Minnesotans per day. On Wednesday, state officials said anyone with COVID-19 like symptoms should be able to get tested. Previously, tests had been limited to specific populations whose results mattered most for public health.

Since the start of the outbreak, 712 Minnesotans have been hospitalized and 268 are currently in the hospital, 104 in intensive care. Of the 2,942 confirmed positive cases in Minnesota, 1,536 no longer need to be isolated, which means they are considered to have recovered.

More information on cases can be found here.

More Minnesotans can go back to work Monday

Gov. Tim Walz made something of a surprise announcement Thursday after he signed an executive order allowing some businesses — previously considered non-essential — to return to on-site work.

In Executive Order 20-40, Walz said that industrial, manufacturing and office work places that do not deal with customers in person and that can operate under social distancing guidelines can open on Monday. The state estimates that 20,000 workplaces that employ between 80,000 and 100,000 people could be covered by the order.

They would join the 2.6 million state workers who have already been on the job throughout the stay at home order.

Steve Grove, the commissioner of the Department of Employment and Economic Development, said businesses can reopen if they choose but that each must craft a plan that covers how they will operate safely. The state does not require those plans be submitted and approved but they must be available should state inspectors request them. But Walz said that workers for those businesses who can work from home must continue to do so.

Workers on unemployment insurance whose jobs are restarting must return to work unless they are sick, caring for a COVID-19 patient or caring for children who are home schooling. There will be help on the state DEED website to find child care.

Walz said he is looking at workplaces and other settings based on the size of the population working there and the predictability of the work. A factory that can spread out workstations and monitor the health of workers is predictable, he said. A crowd in a baseball stadium is not.

“I wish I could even envision when we’re going to back in a crowded stadium,” Walz said. “But that is at the end of the marathon. But at this point in time there are some opportunities.” But Walz stressed that he is not lifting the stay-at-home order which expires May 4 and will likely be extended in some form. He credited the adherence to stay at home for keeping hospitals from being overwhelmed.

“By cutting down unnecessary travel, by staying home and the sacrifices you make have put us in the position where we can start thinking about how do we start turning the dial and normalizing some of the things that have been taken away,” Walz said. 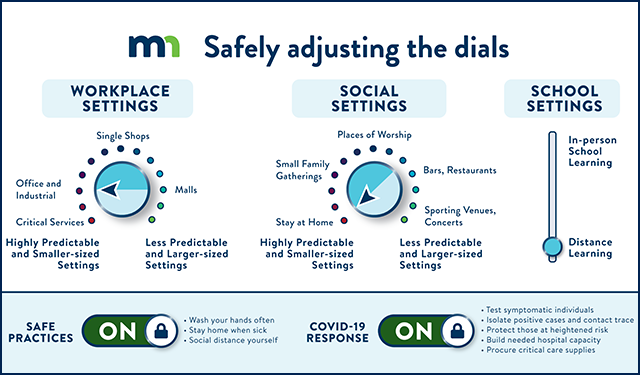 The change was praised by the state’s largest business group.

“We appreciate the Governor’s recognition of returning more businesses to protect our state’s economy,” said Doug Loon, president of the Minnesota Chamber of Commerce. “Employers are taking meaningful steps to protect the health and safety of their employees. Others are poised to reopen responsibly and get our economy moving.”

Why Minnesota is diverging from federal guidelines

Why start to open now, while confirmed cases — and deaths — still appear to be on the rise?

Walz said he thinks the federal guidance is critically important, but said the unique nature of states may warrant different approaches.

Walz said he thinks Minnesotans did a better job of social distancing on the front-end, leading to a flatter curve of disease spread than has been seen in other parts of the country. Besides, he said, there isn’t necessarily any magic to the 14 days number.

As for moving the dial this time, Walz said so far, Minnesota’s outbreaks have centered largely around congregate living settings and businesses, like meat processing facilities, where people are working in close quarters. Many critical businesses seem to have remained open in relative safety, and with the proper precautions, other businesses taking similar measures may be able to do so, too.

In-person school’s out for summer

Also on Thursday, Walz signed an executive order extending the closure of in-person school through the end of the school year  (you can read much more on this and reactions from school districts from education reporter Erin Hinrichs here).

The decision wasn’t unexpected, given the trajectory of virus-related closures in the state, but it does dash any remaining hope of traditional proms and graduations for anyone who was holding out for them.

Minnesota Commissioner of Labor and Industry Nancy Leppink said she is working with the state’s animal processing plants to help them stay open but operate in different ways in light of a spate of infections at those types of workplaces. She said letters have been sent to all meat making operators in the state and stepped up in-person visits.

Leppink said meat processing is at what she called a pressure point “because they are meeting the needs of farmers who need their hogs and their chickens and their turkeys processed.” But they have to operate differently and at less capacity than before. That includes slowing production lines, sequence shifts better, take longer to transition from lunch periods and work breaks and to ramp up health assessments of workers.

“And importantly, they need to look at their incentives for people to come to work sick,” she said. The plants have changed financial incentives to compensate for sick leave “so workers will stay home when they are sick.”

Walz was asked Thursday whether he thought there was a chance the Minnesota State Fair could be held in August. That after fair officials said they preferred a full fair or no fair over a restricted version.

He did not have good news for fair lovers, of which he counts himself.

“This is important to Minnesotans,” Walz said. “We’re coming closer to it, we’re gonna listen to the health experts, but it pains me, pains me, pains me, the state fair falls on the right of the dial.” That references a graphic in Walz’s PowerPoint showing a slow return to normalcy — more like turning a dial than an on-off switch. Items on the right-side of the dial, like concerts, packed sporting events and yes, the State Fair, are likely to be the last to re-open.

“One of the greatest parts of the state fair is it’s super crowded, that you’re elbow-to-elbow with your neighbors, that everywhere you go you talk to somebody,” Walz said. “That’s the charm of the Minnesota State Fair. Unfortunately that is the worst thing for COVID-19 control.

“It’s a pretty tough lift,” he said. “I wouldn’t make a definitive call but I also don’t want to give any false hope on this. It’ll be very difficult to see a state fair operating.

The daily coronavirus update: Up to 100,000 Minnesotans could go back to work Monday