Sign up here to get our updates on coronavirus in Minnesota delivered straight to your inbox. And go here to see all of MinnPost’s COVID-19 coverage.

This story was produced by Wisconsin Watch.

Calvin Johnson spent his final weeks at Prairie du Chien Correctional Institution wracked in pandemic anxiety, a former cellmate recalled. He closely tracked COVID-19’s spread in and outside of the medium-security state prison — eyeing infection counts in surrounding Crawford County and across Wisconsin.

Johnson, who grew up in Milwaukee and was affectionately called “Chicken,” wore a mask at all times in the cramped cell that he shared with three others, said Randy Forsterling, one of the cellmates. Johnson, 52, lived with high blood pressure, asthma and the sense that COVID-19 would kill him.

“I was given 13 years for my crime. I was not given a death sentence,” Johnson, who was convicted of armed robbery in 2016, wrote in an Oct. 19 request to modify his sentence for health reasons.

Johnson’s health declined over the next month, and he died at a La Crosse County hospital on Nov. 30. The cause: complications from COVID-19.

The Prairie du Chien prison was designed to hold 326 inmates, but about 500 packed the prison  during Johnson’s final week alive. The facility has reported 413 inmate infections during the pandemic.

Half of inmates infected

The coronavirus has run rampant across Wisconsin’s prisons, infecting at least 2,153 staff members at adult institutions and 10,786 inmates throughout the pandemic — more than half of the inmate population. The state has detected infections among inmates at a rate more than five times higher than in the general population. At least 25 inmates have died, according to DOC data. John Beard, an agency spokesman, declined to say whether any prison staff had died of the virus.

Advocates fear more inmates have died; the agency hasn’t updated its COVID-19 death toll since Jan. 7, and county medical examiners say determining a cause of death can sometimes take weeks or months.

Wisconsin Watch interviewed more than a dozen inmates at seven facilities for this story. Inmates at five prisons said they witnessed times in which infected inmates weren’t separated from others. And chronic overcrowding remains a major factor driving prison outbreaks in Wisconsin and other states, inmates and experts say.

“If you wanted to reduce the number of people in prisons — whether prisoners or staff — who get sick and die of COVID, the most effective thing you could do is cut the numbers (of inmates),” said David Fathi, director of the American Civil Liberties Union’s National Prison Project.

Wisconsin has trimmed its prison population by about 3,400 since early March 2020 — now at its lowest point in more than two decades. Revocations — violations of post-release supervision — are trending down, Beard said, meaning fewer people are serving time for that reason. Still, the state’s 19,858 inmates as of Jan. 29 are filling facilities designed to hold only 17,609.

Inmate advocates say Gov. Tony Evers, a Democrat, could alleviate crowding by issuing reprieves or commuting the sentences of medically vulnerable inmates. He has declined to wield those powers despite previously setting a goal to cut the state prison population in half.

In a Dec. 1 media briefing, Evers dismissed suggestions that overcrowding made inmates significantly more vulnerable to COVID-19. More important, he said, was to halt the virus outside of prisons and block its pathways in.

“It’s the issue of what’s going on in the community and in the state of Wisconsin — and in our country — that this virus is so prevalent,” he told reporters. “If we had 5% of the prisoners left in an institution, they’d still be getting COVID-19.” 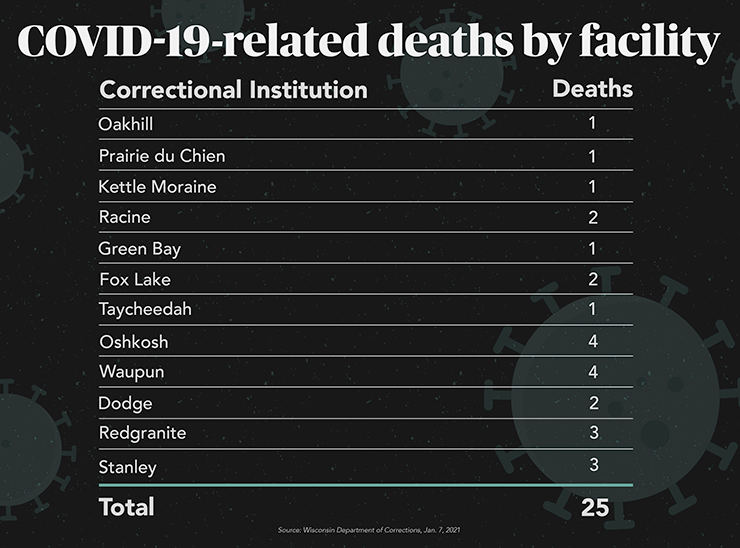 “He shouldn’t have had to die like that,” Milwaukee resident Sherita Johnson said of her uncle. “Calvin wanted to stay well enough to come home, and he never made it.”

Prisons nationwide have struggled to contain the coronavirus. Compared to Wisconsin, most states have confirmed more COVID-19 deaths among inmates when adjusted for population. But Wisconsin ranked 10th in infection rates as of Feb. 5, according to tracking by The Associated Press and The Marshall Project.

Many of Wisconsin’s prisons are poorly designed to keep viruses from spreading. Inmates in some facilities sleep in barrack-like arrangements and cells are cramped. Inmates share toilets, showers and sinks. Prisoners say air typically flows poorly through the facilities — conditions common in prisons nationwide that allow aerosols to remain in the air.

“It’s not that this virus is behaving differently in correctional systems,” said Dr. Lisa Puglisi, an assistant professor at Yale School of Medicine and expert in post-incarceration care. “It is that the (correctional) systems can’t handle the virus.”

Wisconsin’s DOC has adopted policies in line with many of U.S. Centers for Disease Control recommendations. The state rolled out mass testing following a slow start, developed quarantine protocols, mandated mask-wearing among staff and issued at least three cloth masks to inmates free of charge.

“The current state of COVID-19 in our institutions is drastically different than it was in the fall,” Beard wrote in an email. “I believe the work of our institution leadership and staff in stemming the tide of this virus, even if temporarily, should be recognized.”

But Prince Rashada, a 52-year-old inmate at Fox Lake Correctional Institution, was among seven inmates at three prisons who told Wisconsin Watch that soap and sanitizer remained hard to access — or that sanitation was broadly lacking. He was also among eight inmates at five prisons who said infected inmates weren’t always isolated from others.

“The fact remains that they put our lives at risk,” Rashada said in a phone interview. “I fear for my life, and I feel I’m going to die in prison.”

With more than 1,200 inmates, the Fox Lake prison is about 25% overcapacity. Nearly 900 inmates there have tested positive for COVID-19, and at least two have died.

Rashda said he began experiencing COVID-19 symptoms last April but was refused testing; Fox Lake tested no more than a handful of inmates until mass testing began in June, according to DOC data. Rashada later tested positive for COVID-19 in November and now suffers headaches, kidney trouble, lost appetite and fatigue, according to Faithe Wills, his fiancé.

Wisconsin has struggled for years to fully staff prisons, and the pandemic has worsened that challenge.

Citing understaffing at Waupun Correctional, DOC in December announced it would close a cell block at the 170-year-old maximum-security institution — transferring about 220 inmates to medium security institutions through the end of February. The Waupun prison still held 1,007 inmates as of Jan. 29, exceeding capacity by 14%.

Corrections officials have sought to reduce the risk that transfers will fuel outbreaks. That includes suspending movement this fall between DOC institutions experiencing outbreaks, Beard said. The agency says inmates are tested and quarantined before moving between DOC institutions — or before arriving from a county jail. The policy calls for another quarantine upon arrival.

More than 1,800 inmates pack the Oshkosh prison, exceeding its capacity by 23%. At least 1,030 Oshkosh inmates have been infected — most of them before Schumacher’s transfer.

Several factors are driving DOC’s recent population dip, including the agency’s limits on taking inmates from county jails during the pandemic. Additionally, a preexisting Earned Release Program allowed more than 2,100 nonviolent offenders over the past year to pursue substance abuse treatment in lieu of prison.

Inmates’ rights advocates want more action from Evers, who campaigned on an open-ended promise to cut the state prison population by 50%. But he hasn’t used his powers during the pandemic to shorten sentences or issue reprieves — a rarely used tool to temporarily suspend sentences and reinstate them later.

“When the pandemic hit, we were sure this would provide a really great avenue for the governor to release people,” said Peggy West-Schroder, a coordinator for Milwaukee-based Ex-incarcerated People Organizing. “But we haven’t really seen any movement at all on the governor’s behalf.”

When to vaccinate inmates?

Vaccinations could slow the spread of COVID-19 in prisons.

Wisconsin is currently vaccinating people 65 and older. Corrections officials are also among those currently eligible. The Wisconsin Department of Health Services on Jan. 26 announced that people in congregate living settings — including jails and prisons —  would be included in the next phase of eligibility, tentatively beginning on March 1.

In a Feb. 6 email, Schumacher reported that vaccinations for inmates 65 and older had already begun for Oshkosh Correctional. And 69-year-old inmate Ron Schilling told Wisconsin Watch on Monday that a Kettle Moraine Correctional nurse was asking older inmates whether they want vaccines.

Republican lawmakers oppose prioritizing other inmates. Legislation that cleared a Senate committee last month would bar Wisconsin from prioritizing an inmate before that person would be eligible as a member of the general public.

“A healthy 30-year-old three-time murderer would be entitled to receive a vaccine before other at-risk individuals,” Sen. Van Wanggaard, R-Racine, said last month at a hearing.

Puglisi, the Yale professor, said despite the vast number of inmates who have already had COVID-19, reducing populations until vaccinations are more widespread would be wise as researchers still don’t know the frequency of reinfection.

But vaccines will arrive too late for Calvin Johnson. Loved ones remember him as a jokester who never forgot birthdays — even sending cards from prison.

“I just don’t want my brother to die in vain,” she said.

Wisconsin Watch investigations editor Jim Malewitz contributed to this report. Wisconsin Watch collaborates with WPR, PBS Wisconsin, other news media and the University of Wisconsin-Madison School of Journalism and Mass Communication. All works created, published, posted or disseminated by Wisconsin Watch do not necessarily reflect the views or opinions of UW-Madison or any of its affiliates.

‘He shouldn’t have had to die’: COVID-19 infects half of Wisconsin inmates, five times the overall state rate